Cinder and Blacktooth continue their search for Oppenheimer as Shiver and her gang continue to hunt them down. Will Cinder finally be able to obtain his legacy? How does it fare?

[easyazon_link identifier=”B01CRGPIHY” locale=”US” tag=”bounintocomi-20″]Gutter Magic #3[/easyazon_link] is full of action as the chase between Cinder, Blacktooth, and Shiver and her gang makes up the majority of the issue. In addition, there is some interesting dialogue between Cinder and his brother, Victor, to start off the issue.

Rich Douek’s dialogue reinforces Cinder’s extreme desire to obtain what he has never had and shows how far he is willing to go in order to obtain what he believes is rightfully his. It really paints him in a different light and shows the complexities and consequences of his selfish actions. It really changes the way you look at the character. He goes from the hero, to more of an anti-hero figure in just a few short pages. Unfortunately, Douek leaves the introspection on the surface and we don’t get to fully examine how Victor’s words and what has been done to him truly affect Cinder; I’m not sure we will given this is the penultimate issue.

The rest of the story is an action-packed chase sequence across the skies of the Gutter Magic world. You have to suspend your disbelief a little bit as there are some significant moments that appear off the page, but it doesn’t take away from the drama; rather, it almost heightens it. It does so because while Douek and artist Brett Barkley are showing us Cinder’s story, the other players are making their own plans unbeknownst to us. 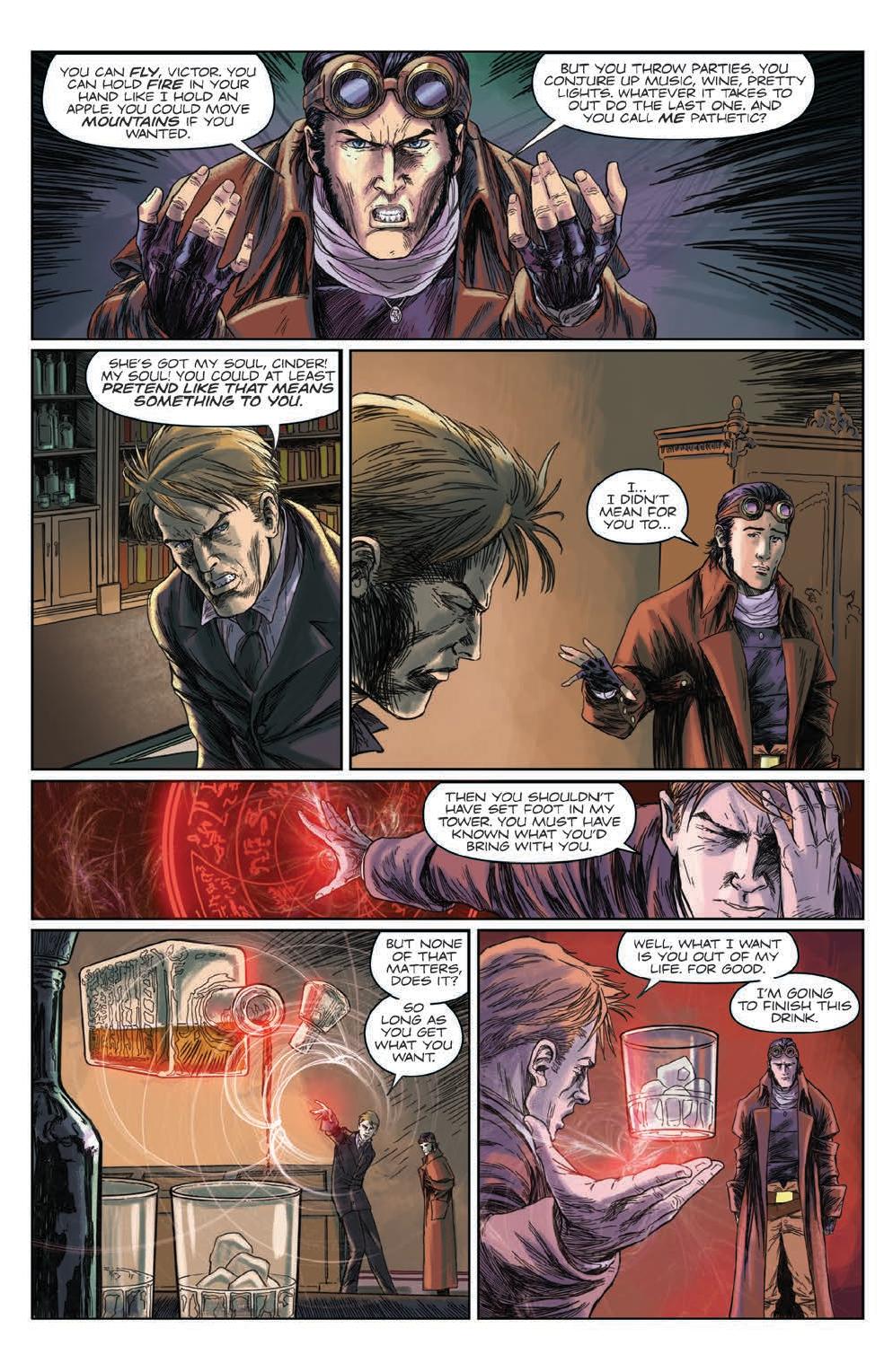 There is one pretty cheesy one-liner during the chase sequence as Douek makes a cheeky reference to Cinder’s goggles. For the most part, the dialogue is tight even during the small villain monologue from Shiver.

Douek’s script is paced very well during the chase sequence. He is able to put his protagonists in impossible situations and seamlessly bring them back from the brink. He introduces a nice plot twist that in other books might feel extremely forced, but Douek makes it feel like part of the world and easily explains it through a line of dialogue.

Barkley’s artwork is what we come to expect. There are some minor continuity issues. For example, during the airship chase sequence somehow Shiver’s ship intercepts Cinder and Blacktooth. It goes from being behind them to all of a sudden directly in front them. There are also problems with how he depicts Shiver’s men getting on board Cinder’s ship. They all of a sudden just appear there. It is possible they use some kind of portal magic, but it isn’t depicted all that well and is quite confusing to see Blacktooth gunning down incoming assailants in the sky to seeing Cinder being assaulted on the deck of the ship.

Aside from these issues Barkley keeps the panel-per-page ratio to a minimum which maintains the book’s flow and makes for a very quick read. His panels are also very basic; he doesn’t use any insets or slants. While basic, it makes it extremely easy to follow and there is no confusion about which panel you should be reading next. 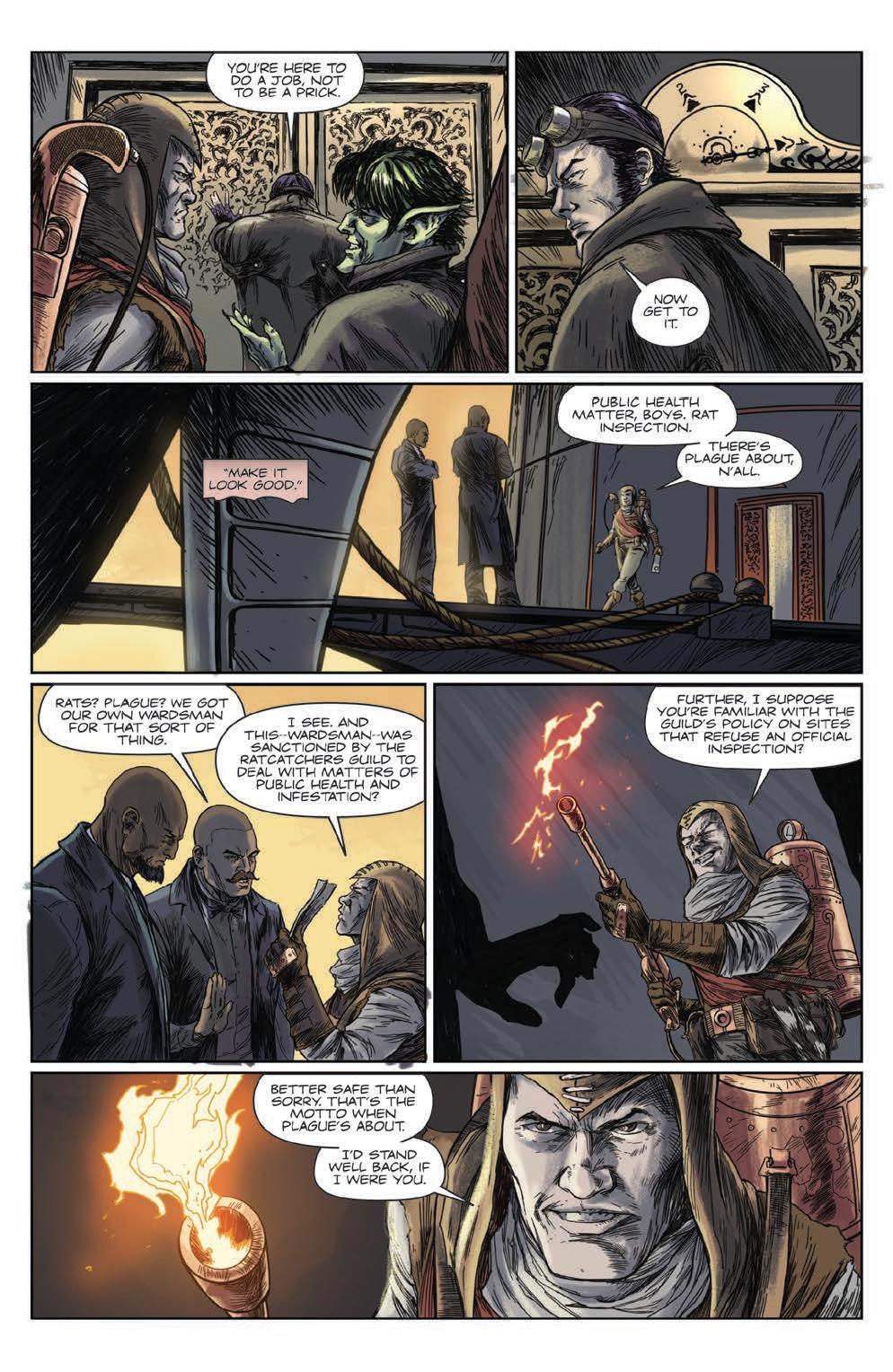 [easyazon_link identifier=”B01CRGPIHY” locale=”US” tag=”bounintocomi-20″]Gutter Magic #3[/easyazon_link] continues the fun romp in this magical steampunk world by introducing airships and dragons in an exciting chase sequence. It also has a very poignant and character-defining moment in the beginning of the story. Unfortunately, Douek doesn’t explore Cinder’s character any further and there are a number of continuity errors with the artwork during the chase sequence that hold this book back. It’s still good, but there is definite room for improvement.