The Secret Six, alongside Batgirl, attempt to defend Strix from the dogged pursuit of Lady Shiva. Will they succeed or will Strix fall into the clutches of Lady Shiva? How does it fare?

[easyazon_link identifier=”B01C9NZ8UC” locale=”US” tag=”bounintocomi-20″]Secret Six #12[/easyazon_link] begins with a conversation that seems completely unrelated to the rest of the story, especially for someone just hopping into the book. In fact, writer Gail Simone never returns to this opening conversation. It can be a little off putting and, as you continue to read through the book, your mind wonders if Simone will ever return to this thread.

The pace doesn’t slow down. Instead, Simone actually quickens it, throwing us right into another action sequence and putting the Secret Six on their heels. In addition, she provides a solid character moment in between as Strix is faced with a tough choice. Her decision shows how much she cares for her team, but also acknowledges the odds they are facing. 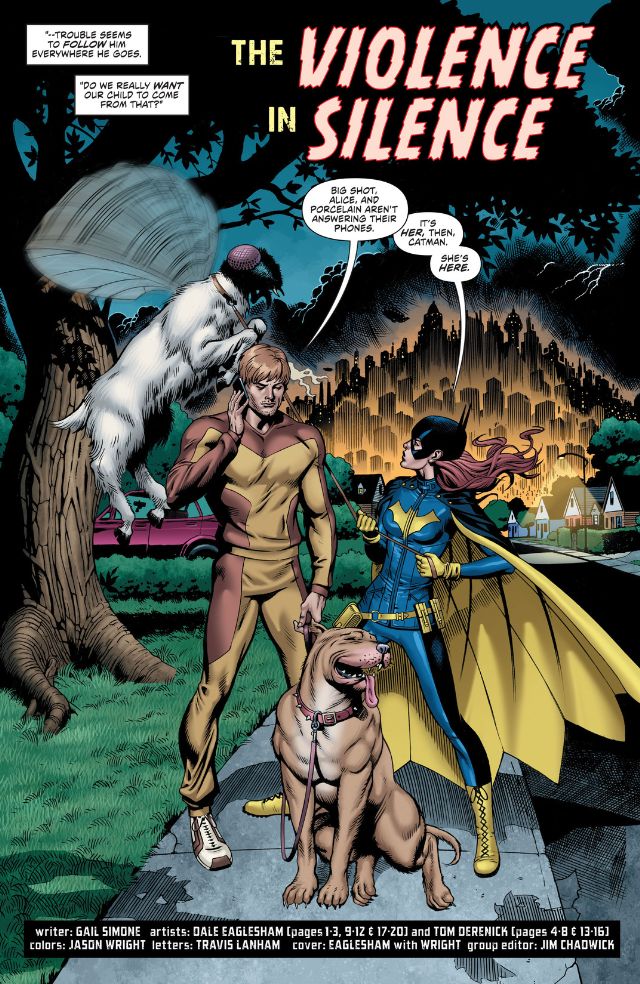 Simone includes a number of other touching character moments including one depicting the bonds of friendship between Strix and Batgirl. The most moving one involves Big Show and the love he has for his wife. She also captures how much the entire team cares for each other. They have a real family feel.

Artists Dale Eaglesham and Tom Derenick split artistic duties. They even switched back and forth throughout the issue with Eaglesham doing pages 1-3, 9-12, and 17-20 and Derenick completing pages 4-8 and 13-16. They do a fantastic job of complementing each other. It would be extremely difficult to tell the book had two artists working on it.

The action sequences are extremely well done and highlight Lady Shiva’s skill with a staff. Eaglesham’s initial fight sequence uses a unique panel design to actually mimic the movement of the staff as it sweeps in with different arcs. He even makes sure to keep one end of the staff hidden to really highlight this effect. On the other hand, Derenick uses inset panels to highlight different attacks and to focus on Lady Shiva’s speed to attack different people on different parts of their body. 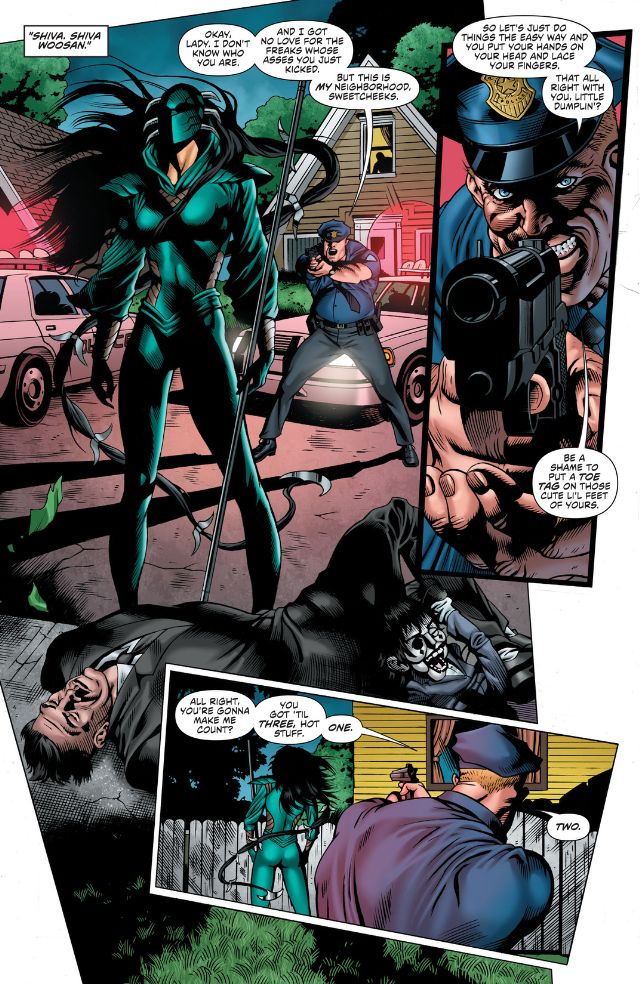 Both Derenick and Eaglesham also do a good job of capturing the emotions of the characters. At one point, you can feel the regret and loneliness just emanating in waves from Strix as Derenick depicts her huddled up in the backseat of a car clutching a pair of boots close, hiding parts of her face and most of her upper torso.

There were some issues. In one panel, Batgirl’s face looks like it is about to fall off her neck. It was really jarring and dropped you out of the story. Eaglesham also gives us a close-up of a police officer which is pretty horrifying. He shades the upper half of his face and puts this Joker-like grimace on it, making the officer look like a super-villain. It seemed an odd choice given he is actually trying to stop Lady Shiva from wreaking havoc on the neighborhood.

[easyazon_link identifier=”B01C9NZ8UC” locale=”US” tag=”bounintocomi-20″]Secret Six #12[/easyazon_link] was a quick, fun, and engaging read. Gail Simone crafts an engaging script with tight action sequences and strong emotional moments for a number of different characters. What she does best is create the family feel of the team, showing how much each of the characters feels for each other. The artwork was very solid with some slick action panels mimicking the motion of Shiva’s staff. There were some jarring issues with the art including Batgirl’s odd neck in one panel. You will definitely want to pick this up if you have been following the series and if you are just looking to jump in, it’s not a bad place to start.