What was once called Japan is now a mega metropolis built on the backs of robots to create a safe-haven for humanity. However, the robots who have built this city are now deemed evil by the occupants who reap the benefits of their labor. How does it fare?

[easyazon_link identifier=”B01C3GD8CK” locale=”US” tag=”bounintocomi-20″]Circuit Breaker #1[/easyazon_link] seems to be heavily influenced by Japanese anime with a myriad of Japanese sayings popping up throughout the issue as well as anime-like characters randomly appearing to comment on what is happening. While this is great for an audience already familiar with Japanese anime culture, it is quite challenging for new readers. The Japanese phrases aren’t explained and it is quite difficult to figure out what their meaning is from the context of the writing.

The writing in general is very choppy and at times doesn’t really make sense. For instance, in the beginning of the issue the main character, Chiren, discusses technology with her friend, Michiko. The discussion attempts to detail why the citizens of this dystopian Japan hate robots. The reasoning doesn’t really make sense. In fact, when the humans’ hate turns into action it doesn’t have anything to do with the actual reasons given by Michiko.

Writer Kevin McCarthy runs into a similar problem when he introduces two police detectives. One of the police detectives begins berating her partner, but after one sentence she begins diving into conspiracy theories. It’s all very strange and doesn’t really flow together at all. 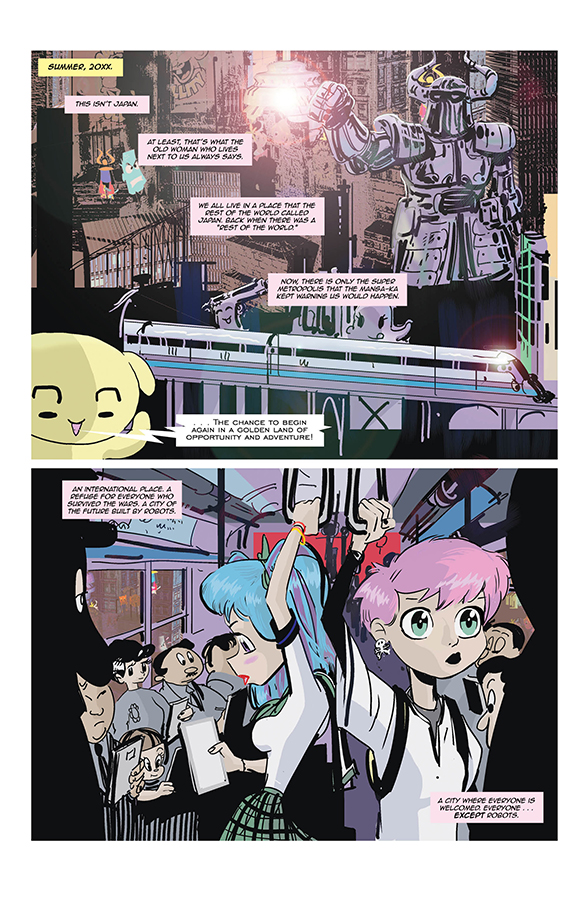 The characterization of Chiren is also problematic. In the first half of the story, she takes action using force to solve her problems whether it’s tossing a robot through a window or pulling out another robot’s wires. However, in one instance where her father is directly threatened, she doesn’t take action at all. She just stands and gapes. It doesn’t really fit into what McCarthy has previously scripted her to do and makes the entire scene feel completely contrived; it lacks any type of believability.

As previously mentioned, the book is heavily influenced by Japanese anime and manga, and Kyle Baker’s artwork is no different. The human characters have big eyes, colorful hair, and dark make-up. Emotions are also conveyed with lines under the characters’ eyes or marks on their foreheads to denote anger.

There are some fun points, especially during the battle sequence. Chiren’s backpack, which is an animal face, takes on different looks and reacts in hilarious fashion when a robot swings and misses or lays fallen. It’s super cute and does a good job of lightening the mood. There are also some great reaction moments where one of the police officers is massively confused and Baker depicts his head shaking back and forth like a Looney Tunes cartoon.

One thing that really emphasizes that this book isn’t targeted at a general audience is the sound effects. They are all in what I am assuming is Japanese. If you don’t read Japanese, it is extremely difficult to determine their meaning. 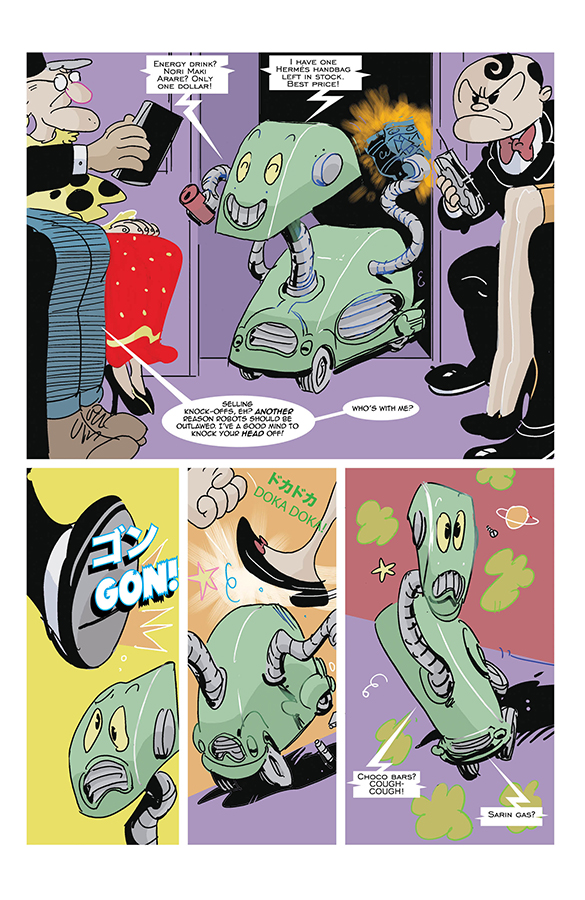 [easyazon_link identifier=”B01C3GD8CK” locale=”US” tag=”bounintocomi-20″]Circuit Breaker #1[/easyazon_link] is a Japanese-inspired dystopian story that is targeted towards a niche audience of Japanese anime and manga fans. However, the actual story struggles with character moments and the writing is rather choppy and sometimes goes off on tangents. Kyle Baker’s artwork definitely captures the anime and manga style and fans of the genre will enjoy it. Chiren’s backpack is a highlight with its changing facial expressions. Unfortunately, this book is one you can and should skip.