Casey Jones is dead and Shredder has captured all of the Turtles using Kitsune’s power to brainwash them. The Turtles now call Shredder master and do his bidding. How does it fare?

[easyazon_link identifier=”B01D28DQRU” locale=”US” tag=”bounintocomi-20″]Teenage Mutant Ninja Turtles: Deviations #1[/easyazon_link] begins with a small section of prose setting the stage and detailing how the story actually unfolded. It then asks us to use our imagination to deviate from the original story and add a twist that makes Splinter’s life even more traumatic. His sons now serve Shredder.

The actual first comic page begins with a chase sequence that sets the tone for the story moving forward. The Turtles are pursuing Splinter. Script writer Tom Waltz expertly characterizes the brainwashed Turtles as ruthless as they use drastic measures, including the torture of Old Hob, to acquire the whereabouts of Splinter. Artist Zach Howard captures their ruthlessness with a simple image. Leonardo’s clenched fist is in the foreground with blood dripping off it while Old Hob sits opposite him tied down in a chair with blood running from his mouth, staining his white neck fur and sleeveless shirt. The scene is made even more dramatic with black splotches on the walls surrounding Old Hob. Black splotches representing a ton of dried blood. It’s quite shocking seeing the brutality in this one image coming from the Turtles. It shows how far they have fallen.

Not only does Waltz show the Turtles’ brutality and ruthlessness, he also captures their persona albeit how they have become twisted in their service to Shredder. However, the core of who they are is there. Michelangelo is all about the party, except the party is an execution. Everything about these Turtles is dark and twisted. They come off as creepy villains in a horror movie. So much so, that Waltz includes a creepy line of dialogue from Rafael, “Splinnnn-Terrr, Splinnn-Terrr.” 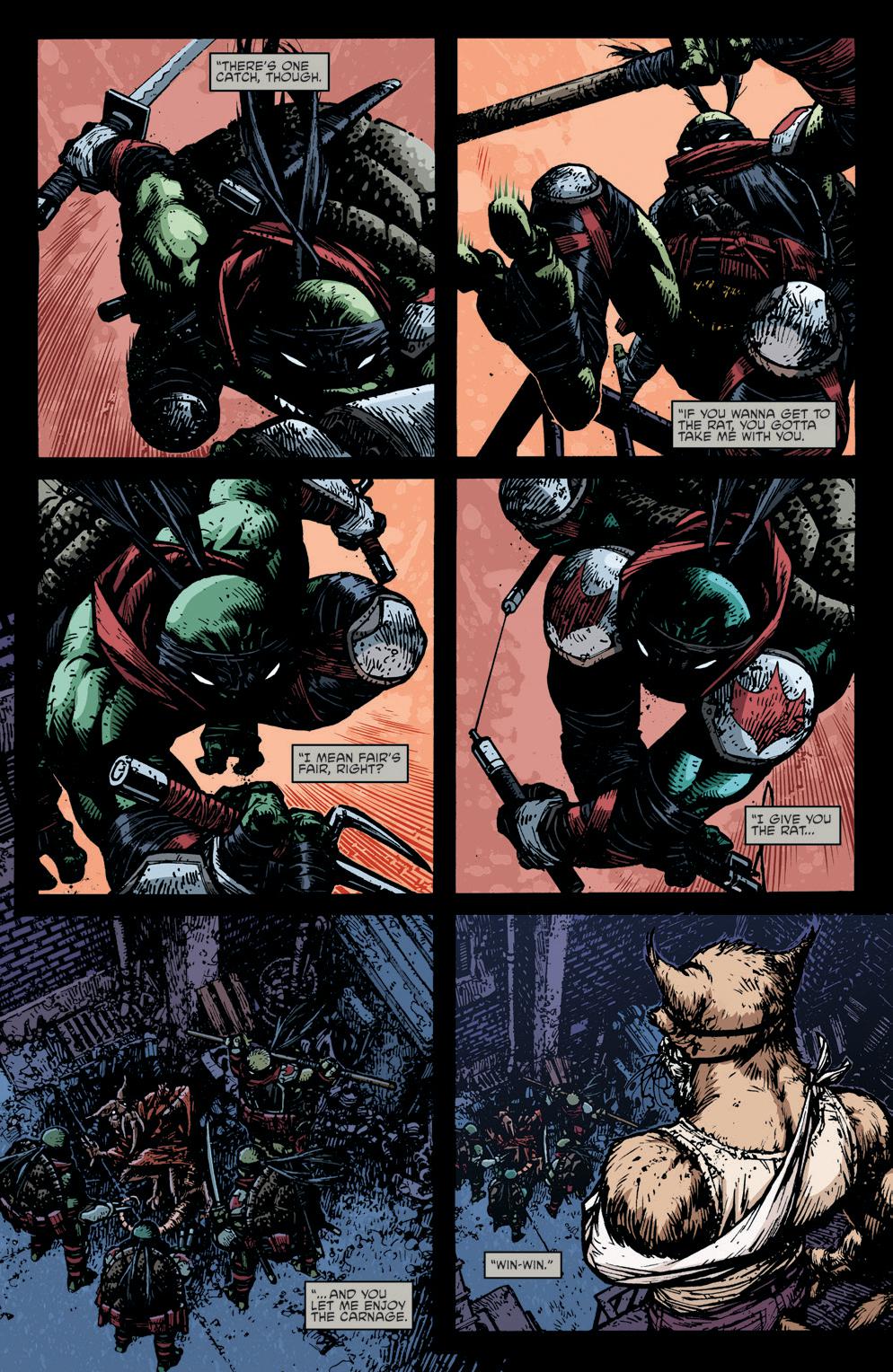 Ronda Pattison’s colors highlight this creepy nature. The Turtles still have their green hue, but it is no longer a light, bright green. Instead, it is closer to black and, at times, she even uses black. Contrast their dark skin tone with the sheer white of their teeth and you just might have nightmares of the Teenage Mutant Ninja Turtles. Aside from the Turtles, Pattison keeps the majority of the issue dark. There are certain scenes where she lightens the mood to give a brief glimpse of hope that Shredder’s claim to power may not come to pass. Those scenes are few and far between.

The actual story is solid. Waltz provides sufficient time with a number of different characters and expertly brings them together for a climactic convergence. This convergence also has a nice twist, keeping us on the edge of our seats. His ability to detail the characters’ motivations makes the story even more enjoyable. It’s also great to see these motivations carried out in different, separate battles that come together in one epic battle.

Howard’s artwork shines during these multiple battles. He is able to skip back and forth between each single battle with ease, providing three or four panels before moving to another battle sequence. This constant shift from battle to battle really makes the larger battle have an epic feel. 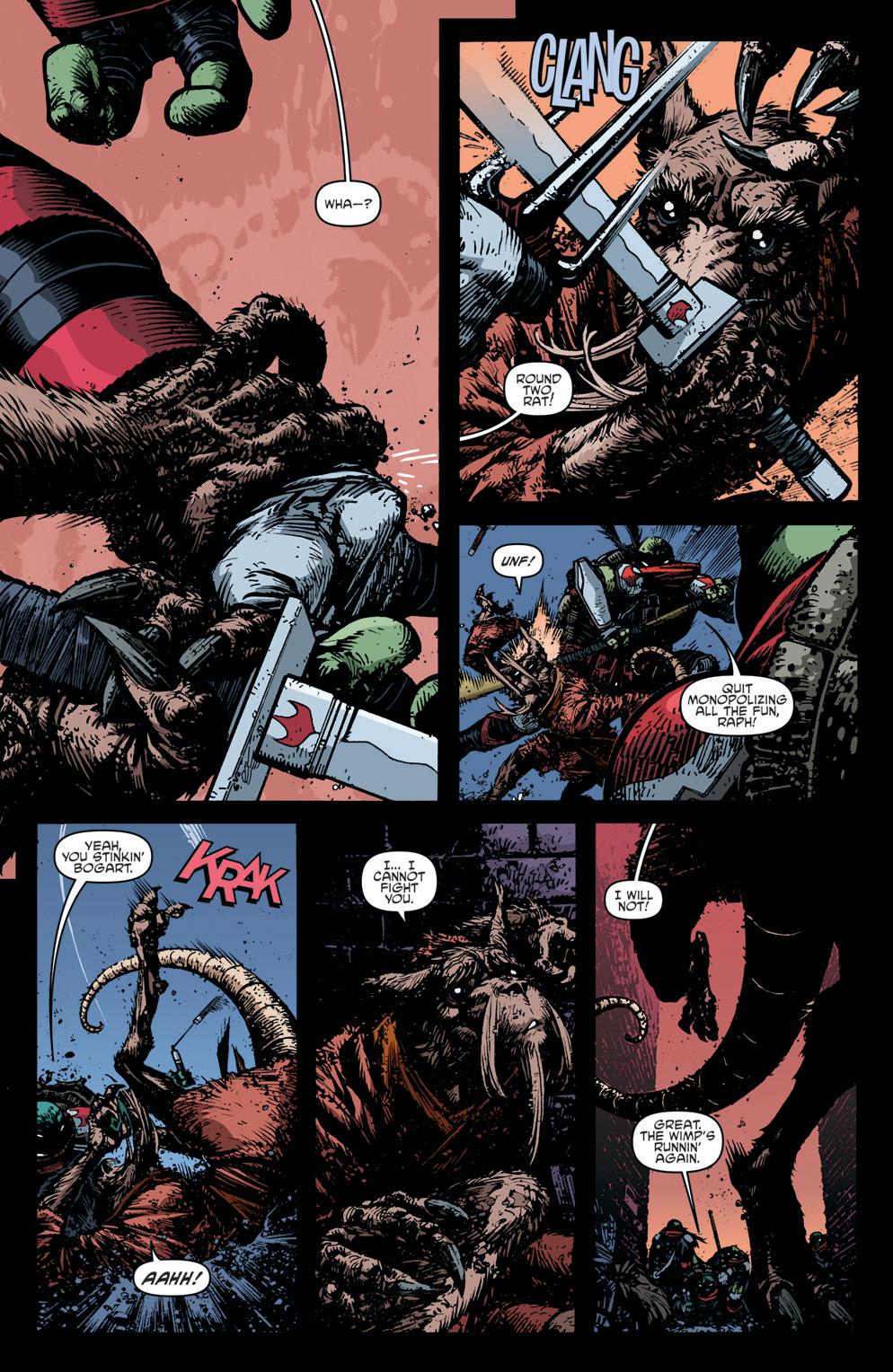 The book does struggle a bit due it being constrained to a single issue. There are certain developments that you have to take in stride because they just happen for the plot’s sake and aren’t really explained. The book also struggles with truly capturing your emotions, especially towards the end of the story. It runs out of space to effectively detail the aftermath of the battle which is limited to a single page. There are also certain characters that may confuse some readers who are not fully familiar with the Teenage Mutant Ninja Turtles universe.

[easyazon_link identifier=”B01D28DQRU” locale=”US” tag=”bounintocomi-20″]Teenage Mutant Ninja Turtles Deviations #1[/easyazon_link] is a great “What If” story. It expertly characterizes a multitude of different characters, especially the Turtles’ dark and twisted nature as they now serve Shredder. The story is well-paced and full of action. There are some issues with certain characters just appearing for the plot’s sake, but these can be easily overlooked given the constraints of a single issue. Howard’s artwork is absolutely incredible and complements Waltz’s script fantastically. This is a dark tale that you won’t want to miss.