An Iraqi civilian and a defense contractor share a couple bottles of vodka and reminisce with each other. How does it fare?

Fate was calling out to me to review this book. Just last month, my buddy, Matt Battaglia, recommended I check out Sheriff of Babylon. I stopped into my local comic shop, Flashback Comics, in Woodbridge, VA and picked up the fourth issue. Unfortunately, I still haven’t been able to read the fourth issue yet. However, I got the opportunity to read The Sheriff of Babylon #5 and I jumped at it. It was a great choice because this is one of the best single issues in comics I have ever read.

Tom King’s dialogue is absolutely brilliant. He is able to weave stories within the story that allows you, the reader, to draw your own conclusions as to what they mean. In fact, King makes this abundantly clear when Fatima asks, “What does this mean?” and Henry and Fatima come to the conclusion that the story Henry has shared with her “should mean something.” 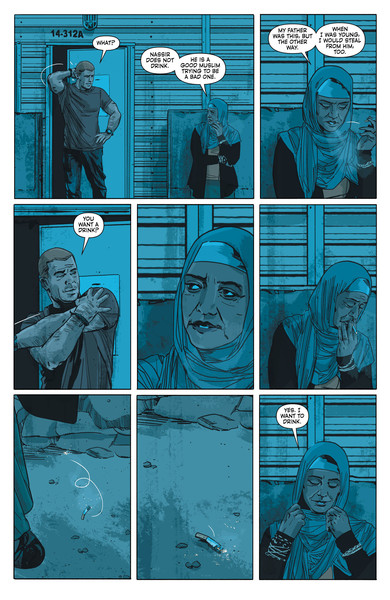 Not only are the actual words King uses brilliant, but the style of the conversation is near perfection. Both Henry and Fatima imbibe more and more alcohol as the story progresses and their dialogue reflects their drunken state. King expertly captures how they talk over each other or have to clarify somewhat obvious points. It makes their entire experience so believable and real. You feel like you are right there with them, a third bottle of vodka in your hand.

If you thought the dialogue and writing was the only excellent part of this book, you would be wrong. Mitch Gerads’ artwork is phenomenal as well. He captures the budding friendship between the two perfectly. Much like the dialogue, their body language and positioning changes as the story moves on. They start off with a reasonable amount of distance between them, but end up leaning and laying on each other. You can almost feel the burdens they are carrying being lifted off their backs as they confide in each other. 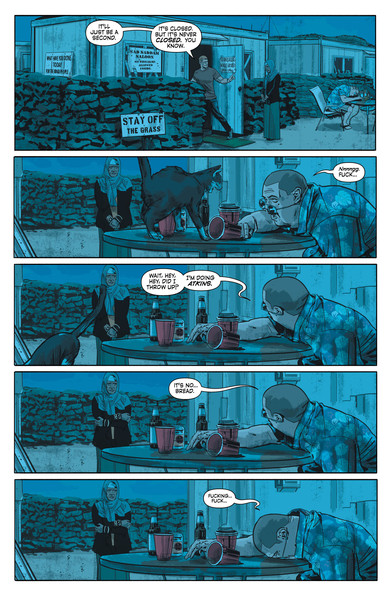 [easyazon_link identifier=”B01D59E6UC” locale=”US” tag=”bounintocomi-20″]The Sheriff of Babylon #5[/easyazon_link] is a perfect comic; it’s that good. The story is smart with deep layers that makes you think about what you have read. It also has extremely relatable characters that have a load of chemistry. The writing perfectly captures each characters’ state of mind and the artwork perfectly complements the writing. This is a comic book you need to read. It’s definitely a series I will be adding to my pull list.