Gotham has a long standing murder problem. I had never really thought about all of these orphaned children until I read Lee Bermejo’s [easyazon_link identifier=”1401259820″ locale=”US” tag=”bounintocomi-20″]We Are Robin Vol. 1: The Vigilante Business[/easyazon_link] drawn by Rob Haynes and Khary Randolph. Randolph describes the book as “a mix of Dark Knight Returns and V for Vendetta.” The book follows a group of Gotham’s orphan children who have taken the persona of Robin and fight crime as teenage vigilantes. The premise seems so obvious when you think about it, it’s a wonder no one thought of it before. I was surprised by how little the book talked about the actual Robin and instead looked at the title as more of a concept that inspires a movement.

The main protagonist of the first volume is Duke Thomas, an African American teen who was orphaned after the Joker gassed the city with his signature toxin. Duke had a happy normal life before his parents vanished. Now as an orphan, he is shuffled around the foster system and spends his nights taking to the streets to find his parents. It is exactly these nocturnal activities that first get the attention of the Robins and lead to his recruitment.

Duke as a character is fun. There is no denying that he fits the cliched archetype of the wayward orphan with a heart of gold and lots of potential, but has nuance that endeared him to me. He has a dark sense of humor that gave levity to some pretty heavy themes and tones. Our mutual love of Tarantino movies helped a lot as well. He has had a run in with Batman before, but he questions why Batman didn’t save his parents. In many ways, he is less interested in saving the city than he is interested in using the resources of the Robins to find his parents. It is a cliched arc, but I am excited to see how he grows as a Robin and invest in the symbol and cause.

The story takes place in the Batman: Year Zero timeline, so in this world, Batman is missing and Commissioner Gordon is running around in Fallout 4 power armor. The Robins are being organized by a mysterious someone who is referred to as The Nest, but they see themselves as deputized Robins. In this way, the book can really delve into the morality of the Robin mantle as well as the effects of Batman as a symbol and beacon to the people he has saved. We Are Robin Vol. 1: The Vigilante Business is surprisingly deep for the story it is telling. 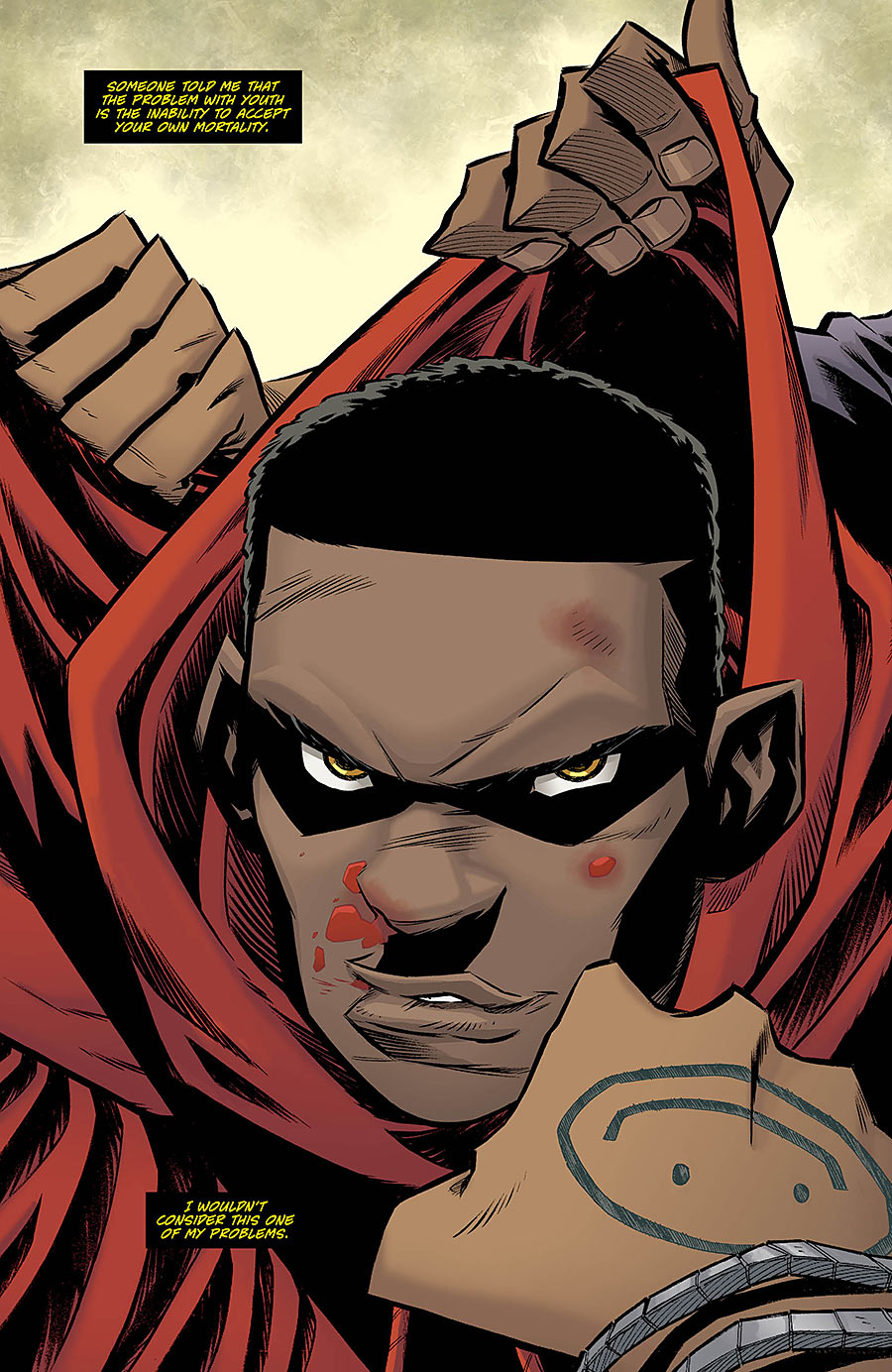 My favorite of the Robin crew is a girl named Riko. She seems to be the most dedicated and actually goes out at night patrolling alone. When you see her at school or at home she has Batgirl leggings and wears a Batgirl cowl to class and reads Lord of The Flies for school. All through her scenes, she compares scenes from the book to to her life in Gotham in a way that shows that she understands the gravity of their situation. There is a particular scene where a group of Gotham’s youth called the cape-catchers set up a controlled fire to get the attention of a hero. They then take pictures of them and livestream it for their blog. It is funny to watch the reactions of the commenters of the livestream while Riko kicks ass. The pivotal moment comes when Batgirl shows up and they have a heart to heart about being a symbol, a vigilante, and the costs associated with those.

The others in the Robin crew aren’t quite fleshed out as much as I would like, but the book is about them as a whole and less about everyone individually. It is interesting to see that not all of them are there for the same reasons or have the same convictions. The Nest actually reflects on the dangerous game they are playing. The Nest, worries that the movement may spin out of control into something terrible, which brings back many of the Lord of The Flies themes and morality questions that made this book so compelling.

In terms of art, the panels had a good flow and I really enjoyed the juxtaposition of the traditionally dark and dreary color scheme of Gotham with the brightly colored Robins on the page. It really gives the impression that the Robins are a ray of hope that Batman rarely is. That said, there were some pages where they took that way too far and into acid trip territory. 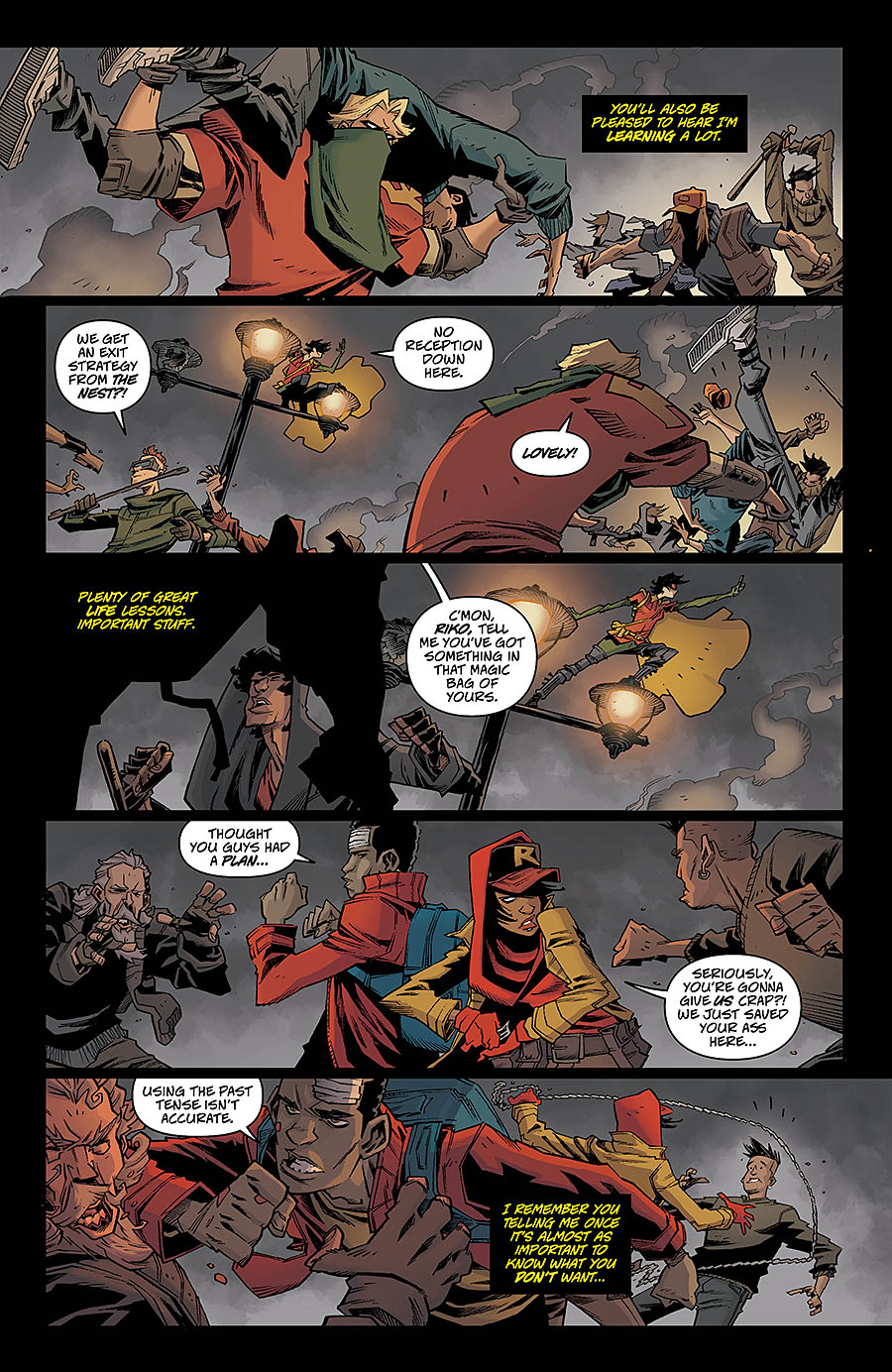 For a book set in Gotham, the traditional Bat family was notably absent from most of the story. This led many of the Robin crew to ask themselves why they are doing what they do and what Batman thinks of them after a particularly rough defeat. This allowed the crew to consider the morality of being vigilantes and, in a way, child soldiers. There are real heavy and interesting questions being asked and I enjoyed reading about this group of Gotham’s youth who were inspired by the symbol and concept of Robin while saying very little about the actual official Robins themselves.

I found [easyazon_link identifier=”1401259820″ locale=”US” tag=”bounintocomi-20″]We Are Robin Vol.1: The Vigilante Business[/easyazon_link] to be compelling and it took a unique look at the people of Gotham without feeling the need to throw the Bat Family in every issue. It explored the nature of social and political movements and the morality of vigilantism and child soldiers. I want to see where they were going with this and I recommend it to anyone.