This past Wednesday, Image Comics had their yearly Image Expo where they unveiled a slew of new creator-owned titles and announcements. We’ve got all of those announcements below: 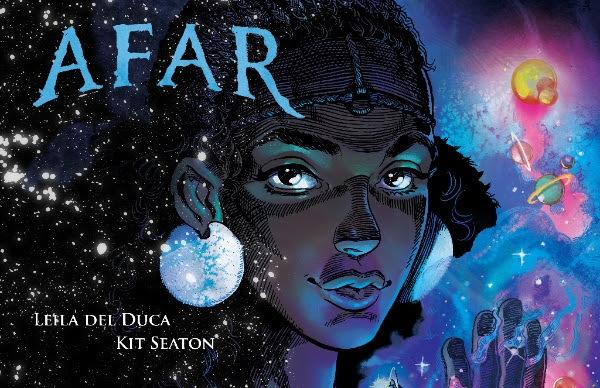 In AFAR, Boetema suddenly develops the ability to astrally project to other worlds, unintentionally possessing the bodies of people light years away. Inotu, her inquisitive brother with a pension for trouble, finds himself on the run after he’s caught eavesdropping on an illegal business deal between small town business tycoons and their cyborg bodyguard. When Boetema accidentally gets someone hurt while in another girl’s body, the siblings are forced to work together to solve the problems they’ve created on their planet and others.

“I’m thrilled to be working with Kit Seaton who beautifully renders the world we’ve created and packs each page full of emotion and wonder,” said Del Duca. “Kit has been amazing to work with, from designing aliens, cultures, old busted tech, and all the weird environments, to drawing each character rich with emotion and personality.” 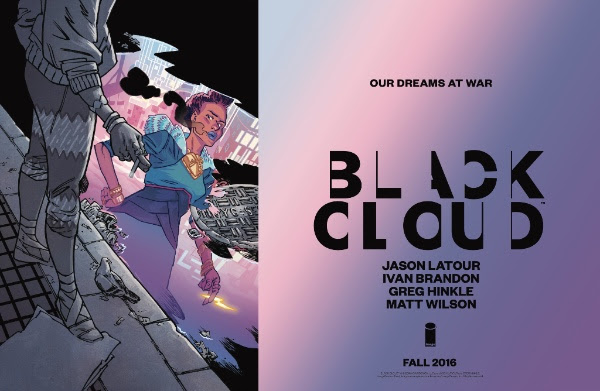 Once upon a time…They built a world where dreams come true… And those dreams went to war. In BLACK CLOUD, we meet Zelda: exiled to Earth, her dreams of revolution are gone, but she still holds the key to the world she left behind. And it’s for sale. 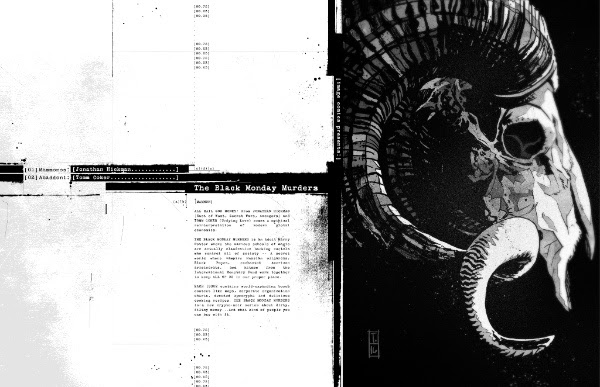 THE BLACK MONDAY MURDERS is classic occult indoctrination where the secret schools of magic are actually clandestine banking cartels who control all of society—a hidden world where vampire Russian oligarchs, Black Popes, enchanted American aristocrats, and hitmen from the International Monetary Fund work together to keep ALL OF US in our rightful place.

THE BLACK MONDAY MURDERS is a brand new, crypto-noir series about dirty, filthy, money… and what kind of people you can buy with it. Set to launch in Fall 2016.

THE DIVIDED STATES OF HYSTERIA by Howard Chaykin 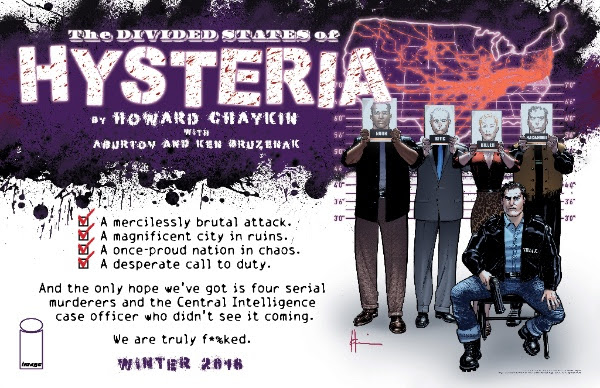 THE DIVIDED STATES OF HYSTERIA is set in the aftermath of a dirty bomb that wipes New York City off the map, as what will come to be known as the Second American Civil War shatters the domestic landscape in isolated pustules of violence…and a team of five private contractors is charged with stemming this tide of rage and bringing the bombers to justice.

THE DIVIDED STATES OF HYSTERIA launches in Winter 2016. 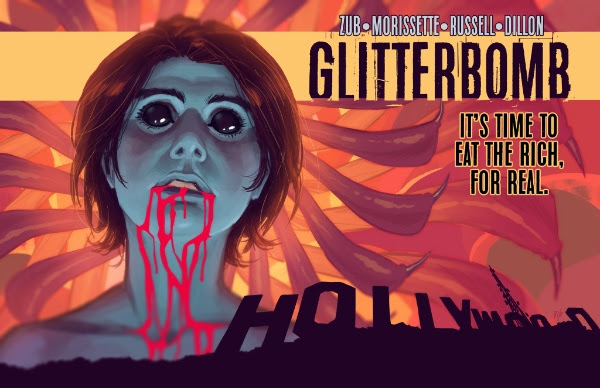 “Probably the only thing I love more than comics is cinema,” said Morissette-Phan. “Which makes Glitterbomb a dream project since it’s a perfect blend of both.”

Set in Hollywood, GLITTERBOMB is a horror story about failed fame and blood-soaked revenge.

“The entertainment industry feeds on our insecurities, desires, and fears,” said Zub. “You can’t toy with those kinds of primal emotions without them biting back.”

GLITTERBOMB is set to launch in late Summer 2016. 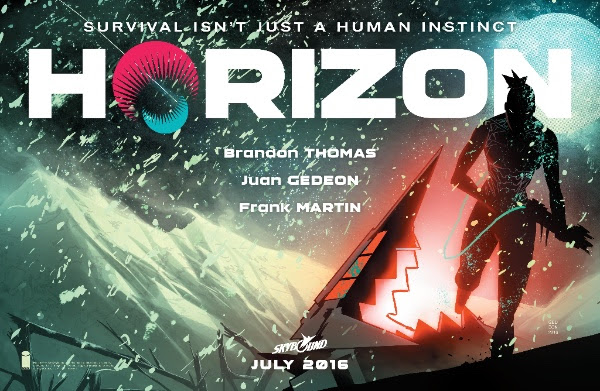 In HORIZON, Zhia Malen thought she’d fought her very last war, until she learned her planet was targeted for occupation…by a desperate world called Earth. The people of Earth will be told that her arrival on our planet means invasion. These are lies. This is retaliation, and Horizon explores what happens when our planet finally runs out of second chances. And when we meet an alien race just as committed to survival as we are…

“This book is about the hypocrisy of survival,” said Thomas. “Our planet has suffered its last abuses, and now humanity’s future lies only in the stars, and some unsuspecting world where we can repeat all of our previous mistakes. Zhia Malen has come to Earth to make sure we finally take some responsibility for our actions.” 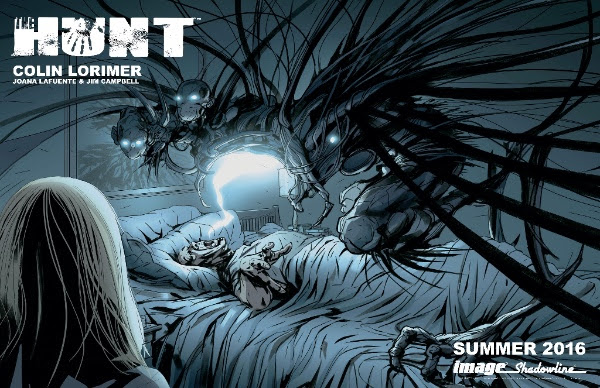 At her father’s deathbed, Orlaigh Roche came face to face with the age-old myth of The Slaugh; a group of soul-stealing spirits so evil that not even hell would take them. Years later, and with the belief that her father’s soul is still trapped in some form of the netherworld, she goes looking for answers—beginning a journey that leads her down a path to discover what really happens to us after we die.

THE HUNT begins in 2016 from Image/Shadowline Comics. 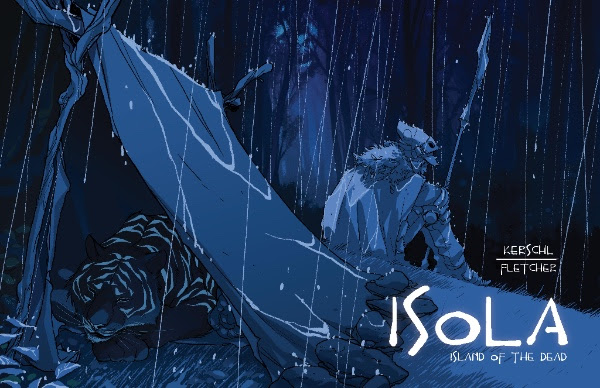 “Karl and I have been working toward creating Isola for more than 30 years. No joke! We met in elementary school, discovered and obsessed over comics together and pushed each other to become the kind of storytellers we admired,” said Fletcher. “From the playground to our parents’ basements to the comic studio in Montreal, Isola has been decades in the making. We can’t wait to introduce you to this beautiful world.”

ISOLA is set in a mystical land where the queen’s brother enacts a treacherous plot to transform her into a tiger. The captain of the guard, a woman of great skill, brings swift and lethal vengeance, unaware the wicked prince alone has the power to reverse the spell. The two women—one on two legs, one on four—must undertake a perilous journey halfway across the globe to the fabled island of ISOLA, gateway to the underworld, where they hope to find the spirit of the queen’s late brother and return her to human form.

Kerschl added: “working concurrently on superhero comics and my webcomic, The Abominable Charles Christopher, I’ve always felt like I was creating for two very different audiences. Isola is a marriage of the comic series Brenden and I grew up reading and the animal stories I’ve been drawing, and I’m excited to finally share it with everyone. ” 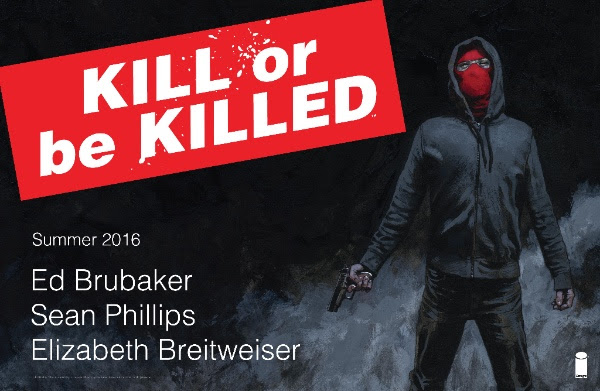 KILL OR BE KILLED is the story of a troubled young man who is compelled to kill bad people, and how he struggles to keep his secret, as it slowly begins to ruin his life and the lives of his friends and loved ones.

Both a thriller and a deconstruction of vigilantism, KILL OR BE KILLED is unlike anything Brubaker and Phillips have done together in their long partnership.

KILL OR BE KILLED is set to launch in Summer 2016. 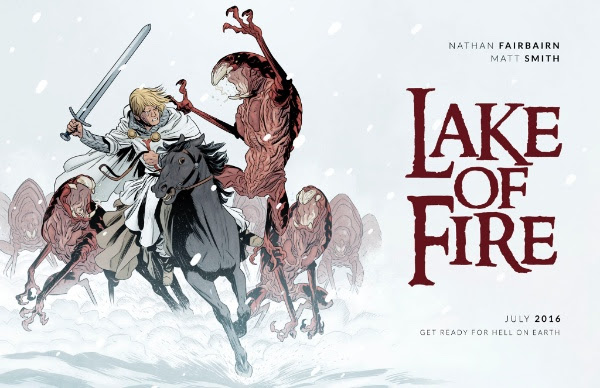 In LAKE OF FIRE it is 1220 AD, and the gears of the Albigensian Crusade grind on. When an alien mining craft infested with legions of bloodthirsty predators crash-lands in the remote wilderness of the French Pyrenees, a small band of crusaders and a Cathar heretic are all that stands between God’s Kingdom and Hell on Earth.