One of the best comics currently published, Chew, is very near to an end. But not before one last celebration of it’s greatest hero, the ass-kicking rooster Poyo, in the upcoming ” Demon Chicken Poyo” at Image comics. We used this opportunity to talk to John Layman (JL) and Rob Guillory (RG) about this book and the end of Chew.

BiC: But first things first Rob, John, I want to let you know that, as someone who came to comic book reading pretty late, in France where I live comic books really became easily available only recently, Chew has been the first Image, or really the first indie comic that I ever bought and added to my pull list. It’s been with me pretty much as long as I’ve read comics and knowing that we are getting near the end is actually really sad for me. And if that’s emotional for me I can’t imagine how it feels for you guys! So… Nearing the big issue 60, how do you feel? What’s on your mind knowing it will be over in a few month?

JL: That’s a tough question, because there’s a whole mix of emotions attached. Excitement that what I set out to do is finally almost done, and a sense of achievement that goes along with it. But a degree of fear at what comes next, and certainly some sadness at saying goodbye to the characters and the story. Rob and I, after all these issues, have pretty much got a good rhythm down, and one that is pretty rare in comics. All this makes the ending very bittersweet.

I’d also add, not completely on the subject, while I don’t know where you live in France, CHEW has been available by our French publisher Delcourt, for a long time. They’ve got 10 or 11 trades out, and are always right behind us, or close, in terms of when we release a TPB in America, a French one follows pretty quickly.

RG: Thanks for the kind words, Jonathan! Yeah, there’s a lot of mixed feelings that I’ll be processing well after CHEW’s done. I’m extremely proud and flabberghasted that the book’s had such a long life and such a loyal fanbase along the way. I’m excited about wrapping our epic on our terms, and very excited about creating new stories in the future. Of course there’s some sadness at ending what we began way back in 2008, but it’s the right time for it. We did way more than either of us could’ve dreamed and I couldn’t be happier.

BiC: Oh yes Delcourt is really promoting and supporting Chew in France. What I meant is I found a store that sold the US single comics around the time Chew started so it’s really been a book that has always been there for me. 🙂

JL: I think I knew what you meant, Jonathan, I just wanted to get a plug in there for Delcourt, because they put out such beautiful editions.

BiC: “Demon Chicken Poyo” marks the last issue of a great Poyo trilogy. When you first started Chew, was it always the plan to have those Poyo stand alones? Were you expecting the tremendous popularity of this character?

JL: No, of all the characters in CHEW, Poyo was the one that I never counted on, who sort of grew organically out of the book. He was introduced as a McGuffin, and with every appearance got more popular, as his adventures got crazier. Eventually, we decided to embrace it. Readers did too, obviously.

RG: Yeah, and honestly I had no idea that Poyo was even one of our characters until I was drawing issue 8’s cover, which features Poyo’s first appearance. I never had any clue that CHEW was going to get that crazy until that point. 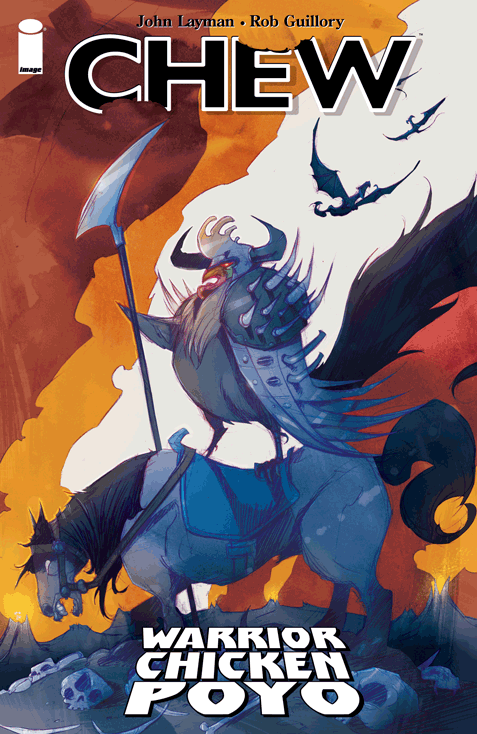 BiC: So far the events of the Poyo books have been very stand-alone and unaffected by the main book’s events. Can we expect the events of “Demon Chicken Poyo” to have an impact on Chew’s final arc?

JL: No, as far as the CHEW universe proper is concerned, Poyo is gone; dead and buried. Really, this is just one last opportunity to have fun with the character, sorta the animated short before a feature film. Also, the last 5 issues of CHEW have a lot going on, and aren’t necessarily the most fun. This Poyo special is just an excuse to go nuts and give Rob crazy stuff to draw. In CHEW terms, it’s the palette cleanser between courses.

BiC: Between the release of “Warrior Chicken Poyo” and “Demon Chicken Poyo”, something pretty horrible happened to our favorite Rooster. Be honest, how much angry fan mail did you get in reaction to this? Do you actually enjoy toying with your reader’s heart

JL: There was a fair amount of hate mail, but it wasn’t the same as when Toni died. Thing is, Poyo is one of those characters who can’t even be stopped by death, as evidenced by “Demon Chicken Poyo.” So it’s a little easier not to take his death so seriously… that and the fact he is a chicken.

JL: Methods have not really changed, but after all this time there is a real sense of trust. I turn in a script to Rob and I dont have to worry about getting turnarounds or page layouts, or thinking “does Rob understand this or that character or what’s going on in the book” the way you might with an artist or project that is newer. I still overwrite overly long scripts— even though I know I don’t need to. I describe things way more than I need to, not because Rob needs it…just because that’s the only way I know how to write, or LIKE to write, anyway.

RG: After 50-something issues, there’s a pretty good shorthand between us. We both know the characters really well, and I generally know what John’s going for, so the collaboration is really easy by this point. 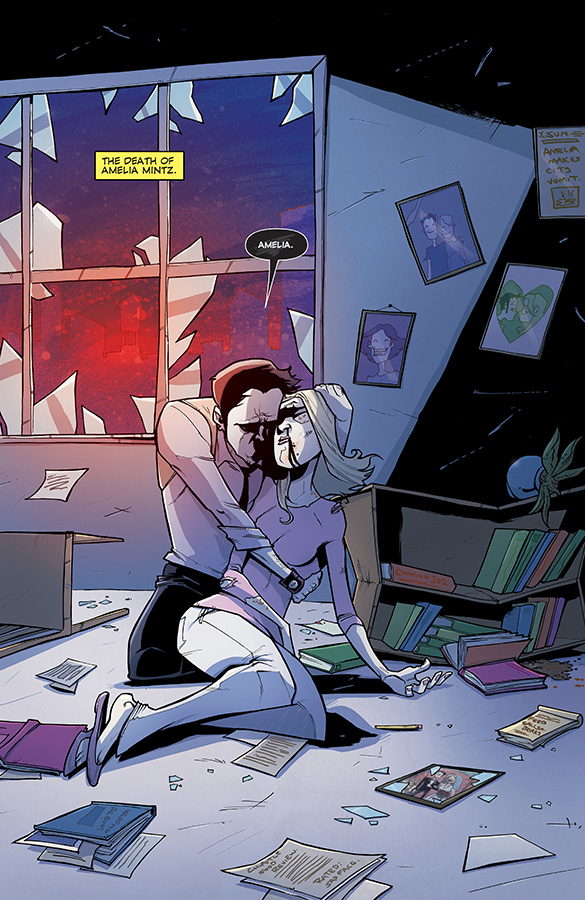 BiC: One thing I appreciate about Chew is that looking at the cover you always know which story arc you’re in and the book’s position in that arc. Also, you release trades fairly quickly which allows readers who discover in trade to catch up with the single issues. Do you feel those methods paid off and are a reason of Chew’s continuing success? Do you feel working with Image allowed you to do things in a way that would not have been possible elsewhere?

JL: That’s an Image thing, and one I am grateful for. When I wrote Detective there was a HUGE lag between release of floppies and release of TPBs, so much so the books weren’t even remotely relevant to what was going on in the universe. I could not and cannot fathom why a publisher would do that. Image though, recognizes there are many different kinds of readers, monthly readers, digital readers, trade waiters, hardcover waiters…it makes no sense to make one group wait longer than they have to. I appreciate that Image pushes out trades as soon as humanly possible. It maximizes readership, and keeps up enthusiasm and inertia.

BiC: Now that Chew is coming to an end, do you already know what awaits for you in the future? Will you at least take some vacation after close to 8 years of hard work?

JL:No plan. I’m enjoying NOT having a plan. I’m retiring, at least for a while.

RG: I’m toying around with a couple creator-owned ideas, but I’m not sure when they’ll be released. It’s both exciting and a little nerve-wracking to be making such a big change after 8 years of working on one project. Ideally, I’ll be taking a few months off, then jumping back in the saddle with something new.

BiC: You’ve both been great. This was a very insightful interview! Thank you both for taking the time. John enjoy not having a plan, you have a well deserved rest! Rob, I can’t wait to see what you’re going to cook up for your new project, let’s have a chat when it comes out!