There has been a murder deep beneath the surface of the ocean in an underwater research facility. The victim’s daughter must investigate the scene and figure out how her father was killed and who did it. How does it fare?

Dept. H #1 is another wonderfully written book by Matt Kindt with beautiful water colors from his wife Sharlene Kindt that not only gives us a fantastic introduction to the character of Mia Hardy, but also builds a very interesting world with a captivating and intriguing premise.

Matt Kindt primarily tells the story from Mia’s perspective using an internal monologue to hash out her thoughts and opinions. What makes the internal monologue even more interesting is how Kindt weaves it with the dialogue. He is able to push Mia’s opinion of other characters onto us. An unassuming conversation with the head of the governmental agency running the underwater research facility is turned into a character assassination of the head honcho. This really gives Mia a ton of complexity and makes the entire story even more interesting. Not only is Mia the daughter of the victim, but she already has well-developed opinions of the individuals she will be investigating. We as readers have no bearing on whether or not these opinions are actually valid. This is the beauty of Kindt’s writing. We as readers are left for the most part to Mia’s telling of the tale.

While Mia’s character is very opinionated, she is also extremely motivated and maybe just a bit stubborn. There is also the hint of a deep bond between her and her father due to her willingness to sacrifice her dreams in the pursuit of the truth behind his murder.

Kindt is able to take this character and have her emotionally tied to her settings. The underwater lab and the notion they are six miles beneath the ocean’s surface is apparent on every single page. While Mia talks about the weight of the ocean, you can feel and see it in Kindt’s sketches and Sharlene’s paintings. 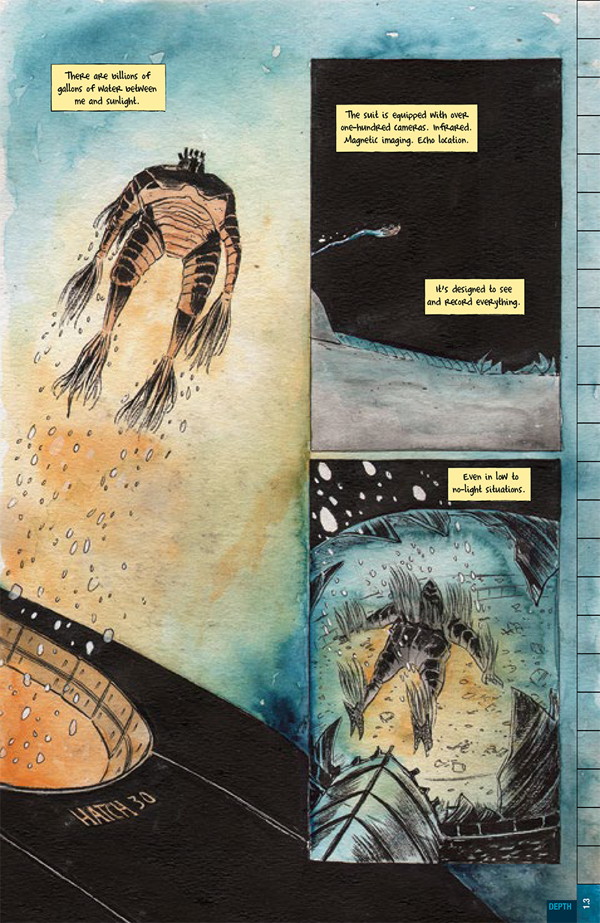 The artwork is solid. Kindt’s style is a little rough and you can see the pencil marks on characters’ beards or on their underwater suits. This grittiness adds to the emotional weight that Mia is feeling and the physical weight from the ocean.

The character designs are all well done and easily discernible from each other. No one character looks like another character. You won’t mistake one for another. As far as the panel layouts, they are fairly generic although each page has a different design than the last. There are some creative designs where Matt and Sharlene use what would otherwise be white space in between panels to depict a love interest from Mia’s past. It’s a great way to depict Mia’s thoughts. Kindt also radically compresses the panel as Mia begins the actual investigative work. The beauty of these pages is that it gives us Mia’s point of view as she takes in the crime scene, but it also shows just how emotionally attached she is to the investigation. There is something poignant about seeing Mia sweat inside her suit surrounded by tons of water.

Sharlene Kindt’s watercolors complement Matt’s script and writing in excellent fashion. It captures the emotional gravitas of the story. The colors are somber, reflecting Mia’s own attitude. Sharlene also uses a distinct bluish white shade to separate flashback scenes from the present, making it abundantly clear we are seeing a memory.

There are some abnormalities. For one, Mia’s father seems to still be floating around in the crime scene despite the roof of the underwater lab having been completely destroyed. One would think his body and most of the evidence would have floated away or been dispersed when the water came rushing into the room, but it all seems to still be in place. 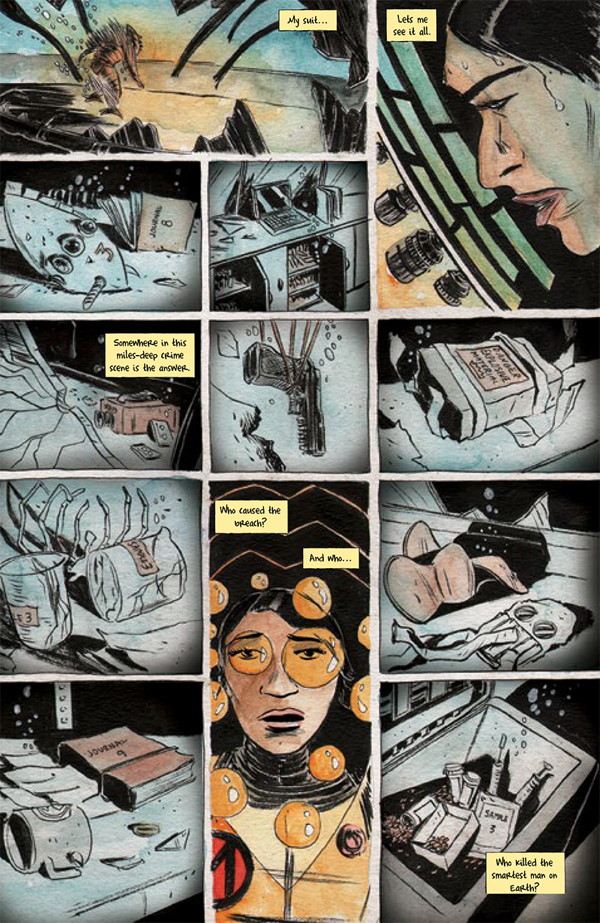 Dept. H #1 is a wonderful comic with a very complex and interesting protagonist in an even more complex and interesting world deep below the ocean’s surface. Matt Kindt’s writing is exceptional in how he weaves the internal monologue with the dialogue. Combine this writing with some gorgeous water coloring from Sharlene and you get a top-notch comic with a mystery that you can’t wait to solve.