Writer George Mann sets the stage for [easyazon_link identifier=”B01CTEKBVM” locale=”US” tag=”bounintocomi-20″]Dark Souls #1[/easyazon_link] with a full page of prose detailing why the world in which we will soon immerse ourselves is so despondent and filled with darkness. If you are familiar with the video games, the premise will be very familiar to you with a tragic figure making what he believes to be is the right decision, but it ends up being the one that dooms his civilization. This is the backdrop we find ourselves when we first meet Fira and Aldrich.

George Mann and artist Alan Quah masterfully capture the essence of Dark Souls as they take our protagonist not only through an arduous physical journey with enemies appearing out of nowhere, but also a spiritual one where Fira’s mind is attacked on all sides that she feels completely lost and helpless at points. The one thing the book doesn’t really capture is the actual level of difficulty and the constant deaths that occur.

One thing that Mann and Quah excel at is slowly building up the challenges and monsters Fira and Aldrich have to overcome. It’s very much like a video game where you begin by defeating weaker monsters until you have acquired enough levels, gear, skills, etc. to defeat the big boss monsters. Fira has to cut her way through “trash mobs” in order to reach the big boss, the Dragon Augerer. There is one twist on the way to the Dragon Augerer that complicates Fira and Aldrich’s relationship. It gets to the heart of Fira’s character and the choices she is willing to make. 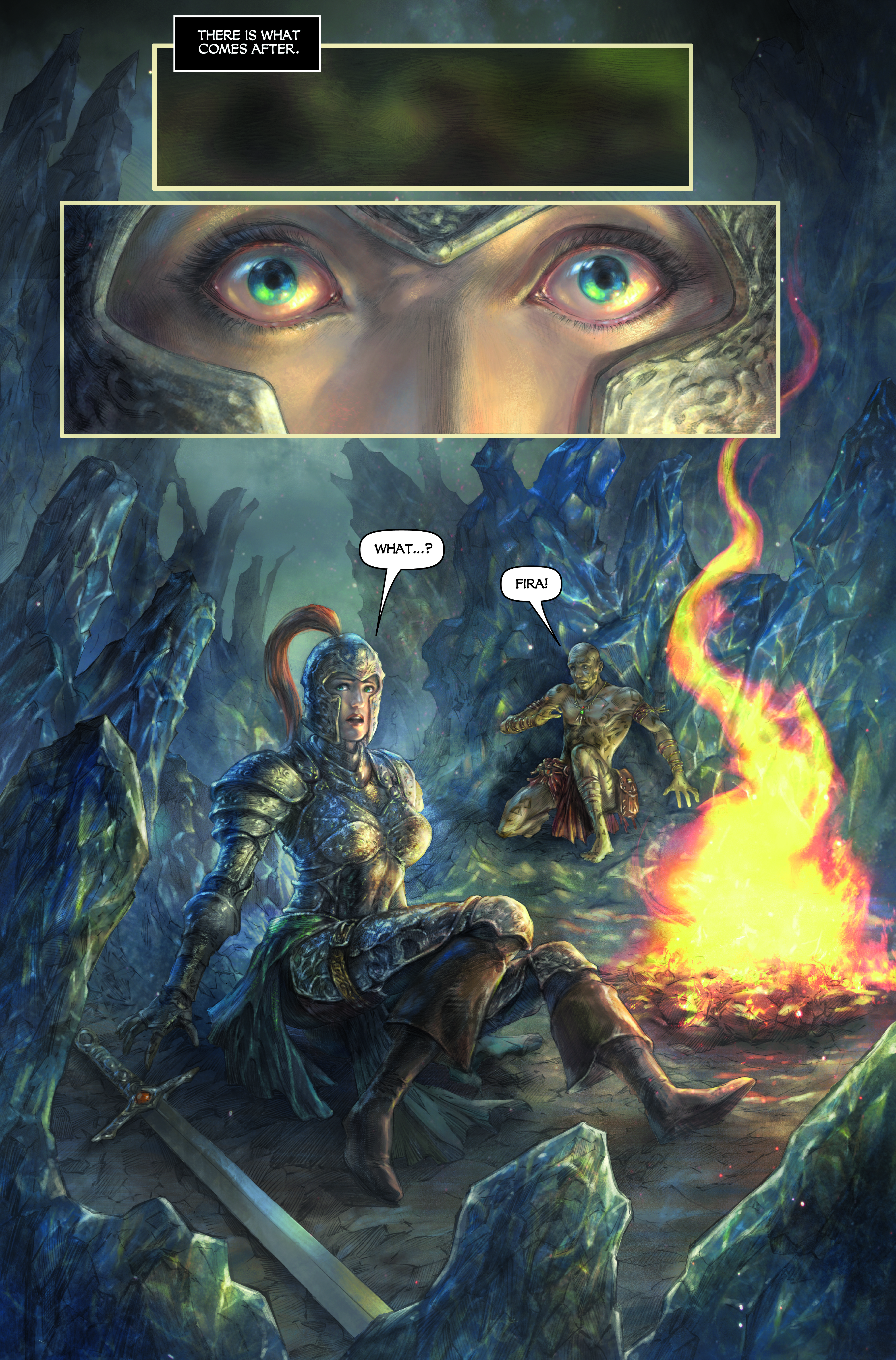 The book has a very rapid pace due to the constant action. There isn’t a page aside from a few in the beginning where some type of combat action isn’t happening. Quah uses an interesting page layout to capture these action scenes. He puts in multiple inset panels on top of larger images. In some cases these inset panels lead up to the larger action. However, in other cases its an excellent way of showing action happening almost simultaneously.

The one aspect of the art that really stood out to me was the colors. They were very bright and vibrant, something you would not expect in a Dark Souls game which is much darker and ominous, symbolizing the difficulty and the grim nature of a defeated world. Instead, we get a lot of bright reds and yellows throughout. The cave system Fire and Aldrich are traversing even glows and sparkles with light. It makes the book feel more high fantasy than dark fantasy.

Quah’s character designs are very cool. I really enjoyed the Dragon Augerer. He looks like a boss mob with a fancy weapon and an absolutely beautiful dragonscale shield. His helmet is intricate and imposing at the same time. The design is well done.

If there is anything to fault about the story, it is its linear path and predictability. Dark Souls video games are anything but linear. They offer you multiple avenues to explore and paths to take. This story doesn’t give that to you at all. 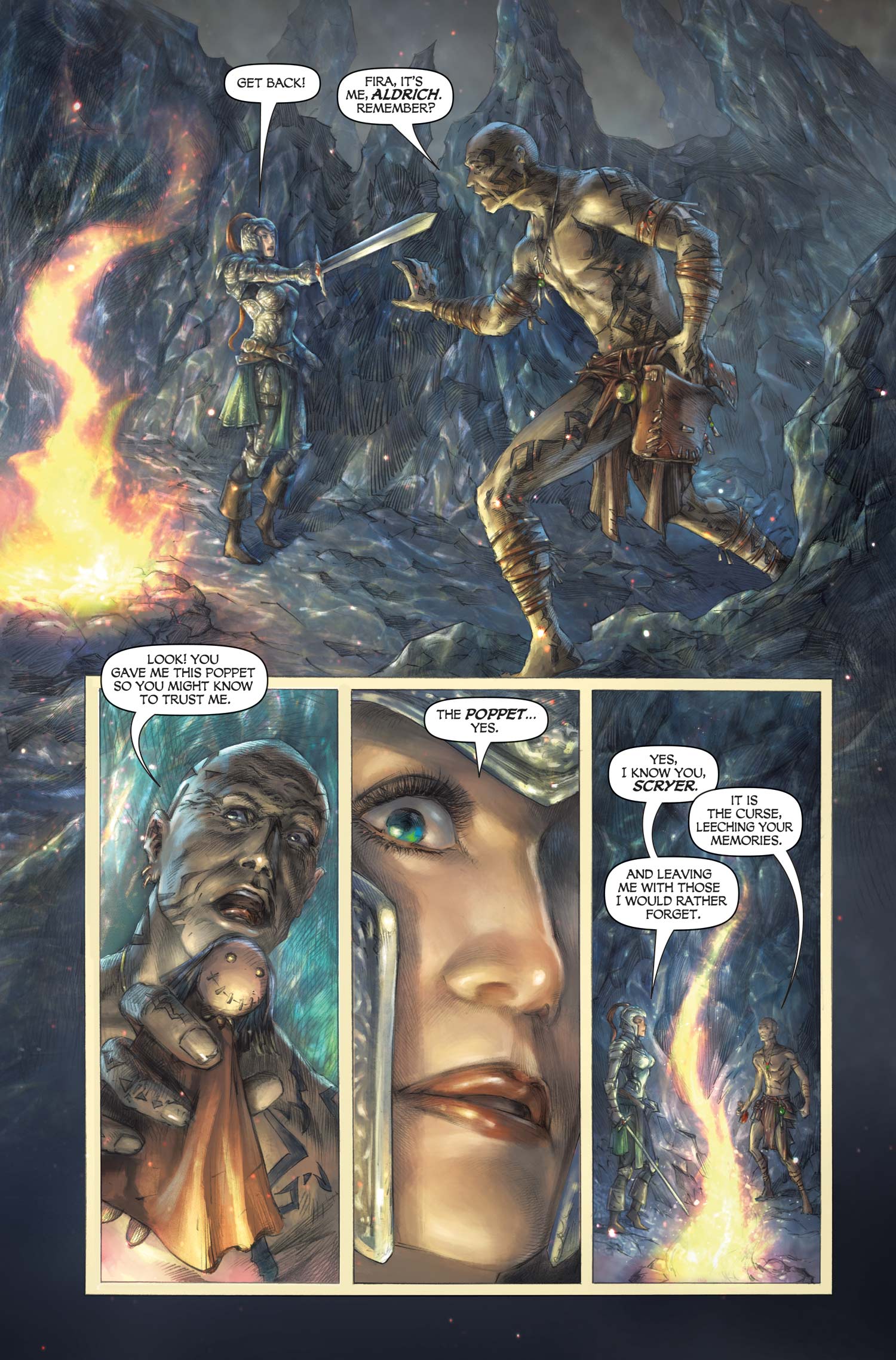 [easyazon_link identifier=”B01CTEKBVM” locale=”US” tag=”bounintocomi-20″]Dark Souls #1[/easyazon_link] is a fun dungeon crawling read with plenty of action and characters that have quite a bit of potential. The book doesn’t really feel very much like a Dark Souls book other than the setting, but even then the bright colors detract from the grim nature that is a cornerstone of the video games. It also is a very linear story with only one real twist. However, what the book does well it really does well. The action is excellent and the character designs are wonderful.