Ragnar and the Vikings are back in England dealing with King Ecbert in order to secure a treaty. Meanwhile, Aslaug and Siggy manage the daily happenings in Kattegat. How does it fare?

[easyazon_link identifier=”B01CTEKBTE” locale=”US” tag=”bounintocomi-20″]Vikings #1[/easyazon_link] takes place during the second season of the History Channel show, but begins with a pretty lengthy flashback to the first season, depicting the first raid on the monastery in England where Athelstan is captured. Writer Cavan Scott uses this flashback to introduce the major players including Lagertha, Rollo, Ragnar, and Floki, whose voice Scott uses to narrate the story.

After this brief introduction, Scott moves into the heart of the story, jumping us through time to a celebration between the Vikings and the kingdom of Wessex. Scott does an excellent job of capturing Floki’s persona and voice. When reading a conversation between Rollo and Floki you can hear Gustaf Skarsgård’s voice through the pages.

This conversation almost feels ripped from the television show, so much so that it doesn’t feel like it’s covering any new ground. If you’ve been following the show, you understand the conflict brewing within Floki. I will say that it does do a good job of characterizing the two characters if you are unfamiliar with them.

The most interesting part of the story comes when Scott takes us back to Kattegat where we are a witness to Aslaug’s rule while Ragnar is away. Scott introduces us to some of the courtly duties she must perform as well as exposing us to a certain form of Viking justice. 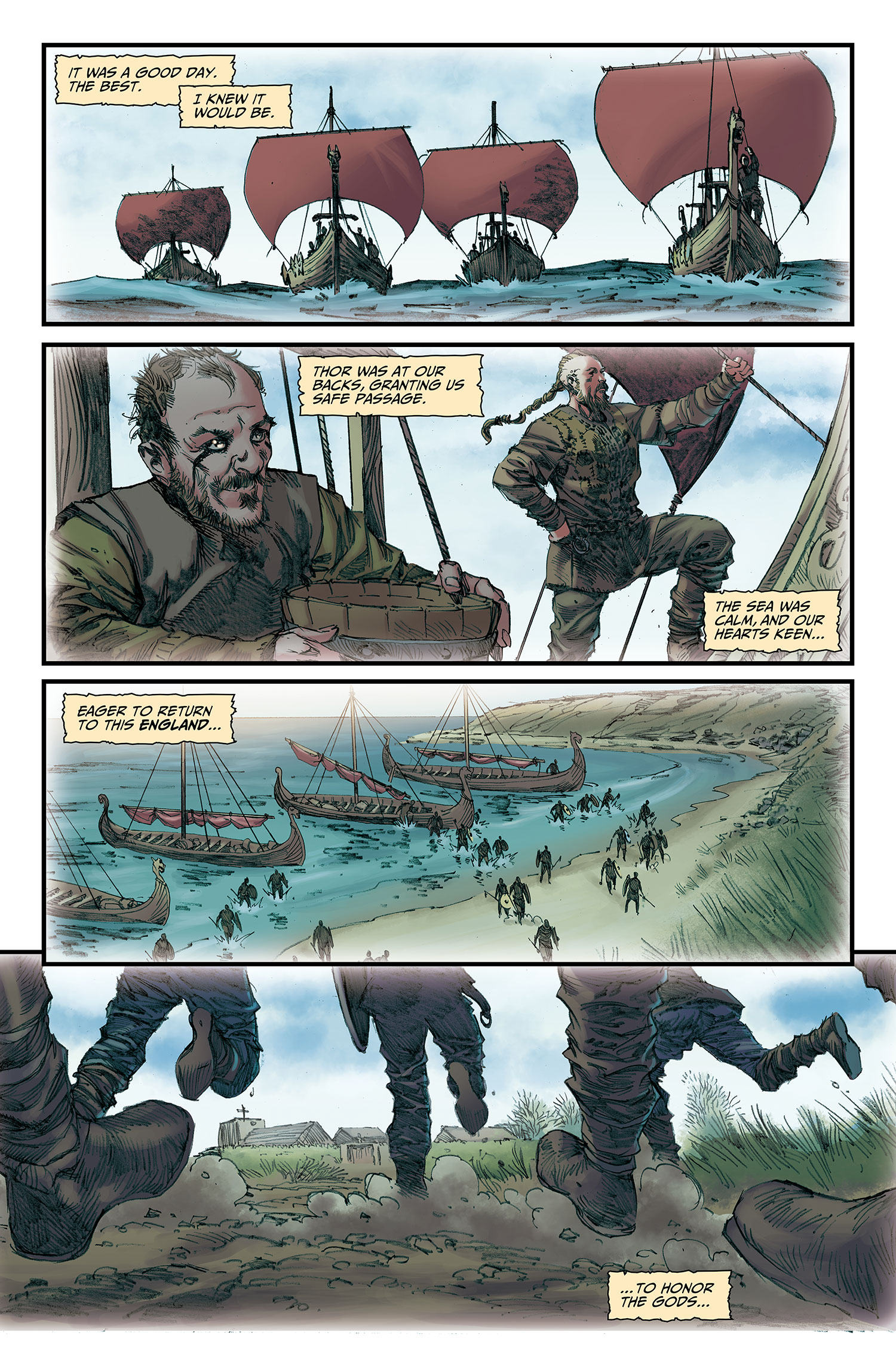 Scott does a decent job of including many of the mainstays from the television series. There are slight hints of political maneuvering. Ragnar’s power over his own people, especially his brother, is on full display. There is even an appearance by The Seer.

Despite a decent script and some solid writing, Staz Johnson’s artwork is just not up to par. The characters are constantly in flux with their appearance changing as the story goes along. To make matters worse, he fails to really capture Clive Standen’s iconic look as Rollo or Linus Roache’s King Ecbert. If you didn’t know this was a Vikings book, it would be difficult to tell who Ragnar or Lagertha were because they don’t resemble Travis Fimmel or Katheryn Winnick. The only one who resembles the actual actor is Floki.

If you disregard the lack of resemblance to the actors, the artwork is decent enough. Johnson is able to capture and highlight key moments, although at times he adds in superfluous inset panels that can distract from those moments. For example, during a certain Viking trial there was no need to include a panel of the crowd and takes up page space; it could have been used to highlight the outcome.

The panels in general feel plain and devoid of emotion. This doesn’t entirely fall on Johnson, but on colorist Rodrigo Fernandes as well who uses a lot of grey backgrounds that wash everything out. It also makes most of the book feel dreary. I understand life back then was rough, but even the show has plenty of color whether it be banners, shields, or even the beautiful landscapes. You don’t really get to see any bright colors in this issue. 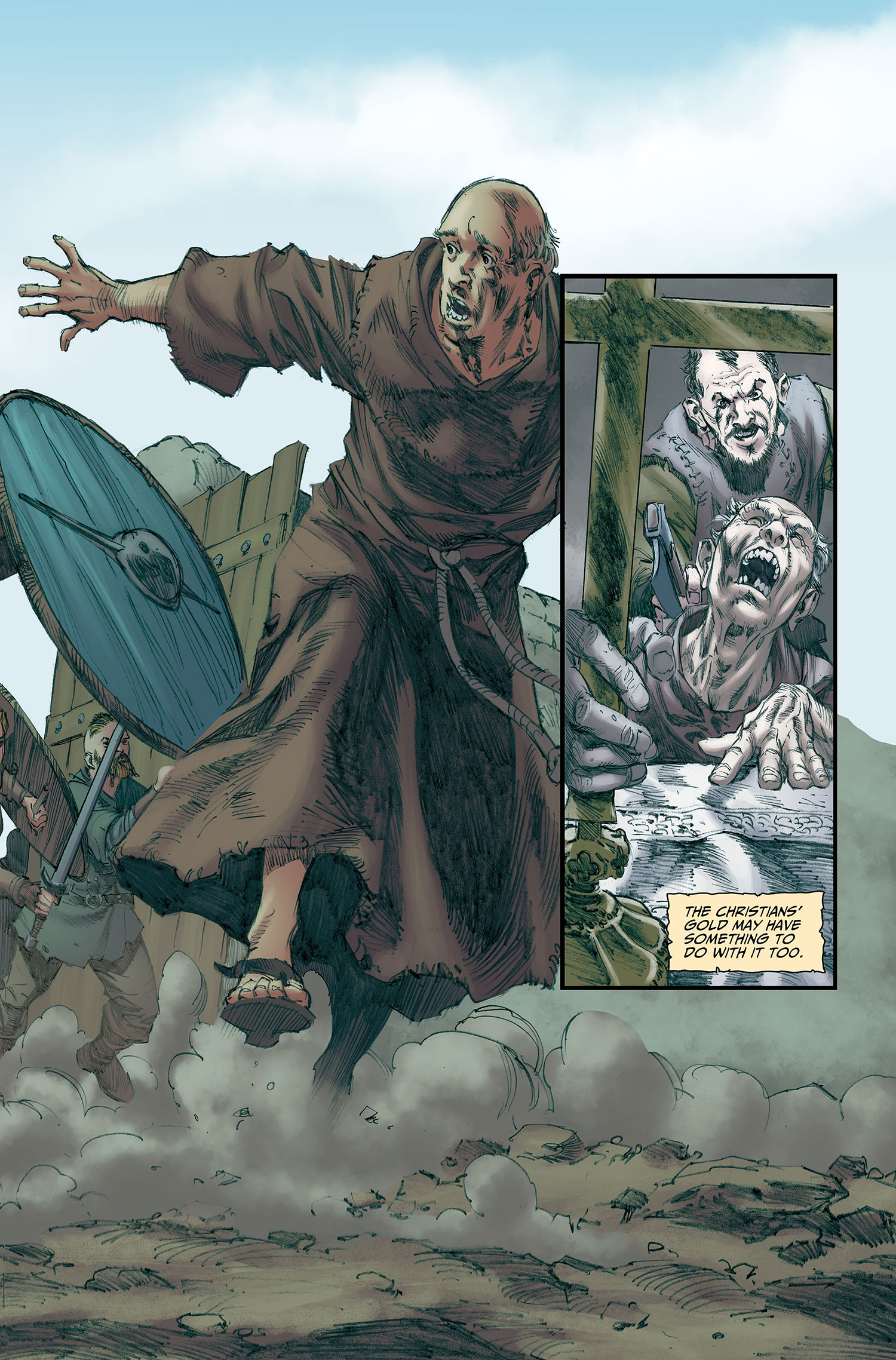 [easyazon_link identifier=”B01CTEKBTE” locale=”US” tag=”bounintocomi-20″]Vikings #1[/easyazon_link] is a mediocre first entry. The book takes us back to Season 2, but doesn’t really give us anything juicy yet. Scott does provide some pretty good writing and reinforces the characterization from the show, but it doesn’t make up for the drab coloring and the just plain bad character drawings that hardly represent the actors from the show. I’ll probably stay around for the second issue because I love the television show, but you aren’t missing anything in this first issue.