We’ve got a fantastic interview for you today, Red Wolf writer Nathan Edmondson chatted with us about what makes Red Wolf so unique as a character and gives us some small teases about what we can expect for the sixth issue and beyond. We also snuck in a question about his upcoming project North with Dark Horse and learned of an even bigger project he is working on!

Nathan: As is the case with any comic book, the joy is in the art. With Red Wolf, the art team epitomizes diligence and talent. It’s just a pleasure to work on — and the reception to the book (as always, foremost to the art) has been totally esteeming.

BiC: When you are writing a script is there a specific routine you go through? Are there any idiosyncrasies that you have?

Nathan: I have plenty of idiosyncrasies, but when it comes to writing I guess I just sit down and I write. Sometimes at my home office, sometimes at my LA office, sometimes at a cafe. Generally I work best first thing in the morning — 5 a.m., with a single cup of coffee beside me. Having two small kids means routine can often be difficult to come by, but fortunately I write very quickly. A comic script typically goes in an hour or two, if I have a good idea of what I want to write.

BiC: How do Dalibor Talajic and Jeffrey Veregge influence the story?

Nathan: Both of these supremely talented artists have been wonderful teammates; Dalibor’s eye for action and Jeffrey’s insight into Native American nation communities inform every page of the book. The collaboration has been the best sort, though, where all of us are on the same page and believe in the story and characters but each of us brings to it something different and unique. Dalibor has a fantastic talent to draw interesting characters and Jeffrey is responsible for the entire branding of the book — every issues jumps out on the stands.

BiC: One of the highlights of Red Wolf is the actual character, you’ve done a great job of showing his heart so much so that he jumps right into action to help others even after being transported into an alien future. Is there a reason why we haven’t seen him desire to find a way back to his own time line?

I think Red Wolf on the one hand thinks of things directly and simply; that’s where his honor and sense of justice comes from. He doesn’t try to overcomplicate things. On the other hand, he’s very smart, and he knows that he’s in dangerous and unfamiliar territory, and much like if he had been hunting and suddenly suspected himself in Bear territory. 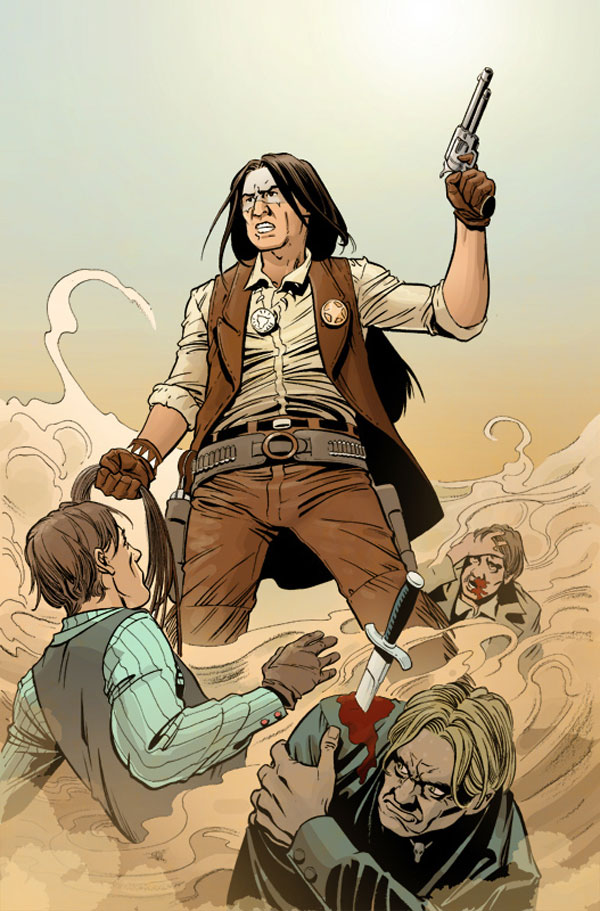 BiC: One of the themes throughout the story so far has been property dispute. It’s even the first conflict that Sheriff Red Wolf must solve. What’s the reasoning behind using this theme as the main catalyst for much of the conflicts happening within the book?

Nathan: In part, this plays into ideas of Manifest Destiny, of the settling of new territory. Part of the adventure is that Red is facing similar struggles, similar villains in the present as in the past — and that maybe some villains transcend time, even literally.

BiC: You’ve written a couple of other Marvel characters including the Punisher, Black Widow, and Deathlok. How is Red Wolf different?

Nathan: More than any other I’ve worked on Red occupies his own corner of the Marvel Universe. The book has its own tone, its own set of rules and geography not shared by other characters.

BiC: Are there any similarities?

Nathan: I suppose the obvious similarity is that at some level, the quality of “hero” has to find some consonance; Black Widow was far less honorable perhaps, and Punisher even less so in his own way, but all share a sense of purpose that resonates with their sense of justice. Of course, the same can be said of many villains, but unique to heroes are the values of selflessness and a love for discerning truth. Red Wolf more than any other character I’ve written embraces those values in the most pure and direct way.

BiC: The Marvel Universe is huge and there are a ton of characters, will we eventually see any of Marvel’s big name characters like Captain America, Iron Man, Spider-Man, or Thor make an appearance or influence the story in any way aside from Red Wolf inheriting the Sheriff’s badge from Steve Rogers?

Nathan: Who knows; we set off to tell a 6-issue story at the get-go, and we didn’t conceive it with any crossovers. We didn’t want to dilute the “backwaters” of Red Wolf’s world with more mainstream superhero blood, since we felt that doing so would distract from Red Wolf, who is really on a journey to prove himself to the reader.

BiC: What part, if any, will Red Wolf play in the upcoming Civil War II event?

Nathan: None on our end, but I think he’ll probably play some small part at least. 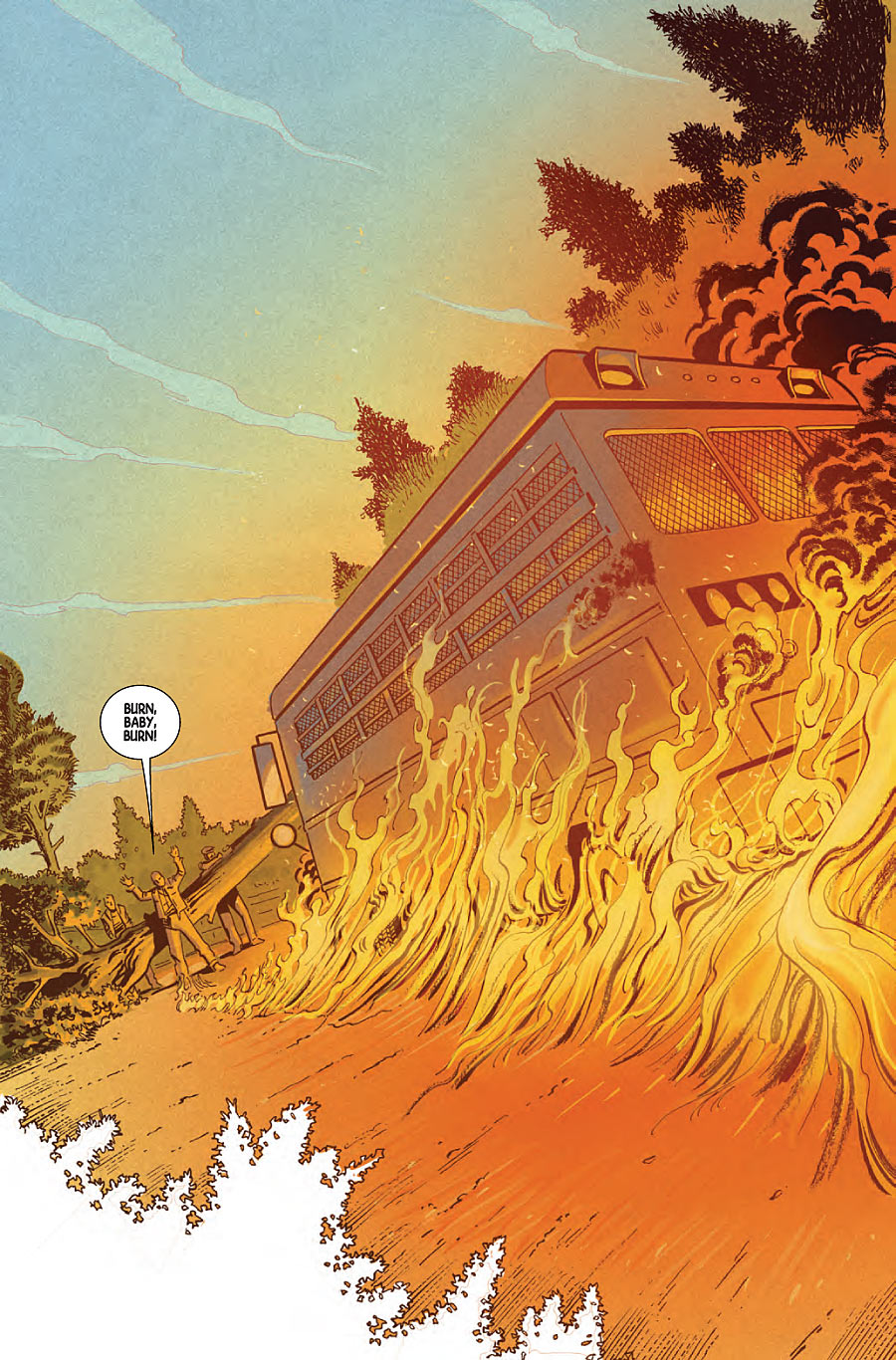 BiC: When this series was first announced, there was a lot of negative press in the comic book blogosphere. Do you think it has affected the popularity of the book in any way?

Nathan: Who knows. It’s certainly unfortunate that there are folks out there opposed to diversity in comics, but our job as a creative team was just not to pay that any mind. The numbers were strong out the gate but even so we always knew this would be a difficult character to sell in the crowded marketplace, regardless of anything else. I can certainly say nothing ever slowed us down on the creative side.

BiC: What can we expect in upcoming issues of Red Wolf?

Nathan: Issue 6 sees some resolution and a very cool brawl with what is by far my favorite moment so far in the series. We get a nice connection to the weirdness in issue 1 that brought Red to the future. We will have to see what comes next — Red may toss his hat into the wider Marvel U now that he’s made an impression in Santa Rosa.

BiC: If you could write any character who would it be and why?

Nathan: I really would have enjoyed Doctor Strange, as I think he poses very unique challenges. Adam Strange would be fun, for that matter — lots of “strange” going on. I don’t know, I’ve never “hoped” to write any particular character, and I’ve turned down some major characters when I didn’t feel I had anything to offer them. It’s all about what opportunity comes up and when. I’m currently working on a very big and lucrative project that came to me out of the wild blue—so much so that when I got the call about it, I was fairly certain the caller had the wrong number. And now I’m knee deep and researching and developing this world.

Ultimately, though, the characters that I create, that originate in my mind and in my experience in the world are the most rewarding to write. And those you can never predict, and never plan for. They come to you when they’re ready.

BiC: Do you have any aspirations to mix your comic book writing with your screenwriting? Maybe work on some Agents of S.H.I.E.L.D. episodes or the upcoming Marvel’s Most Wanted?

Nathan: I would consider adapting one of my own titles, but beyond that not really. I’m currently doing some TV writing and I’ve enjoyed creating IP in the film space. 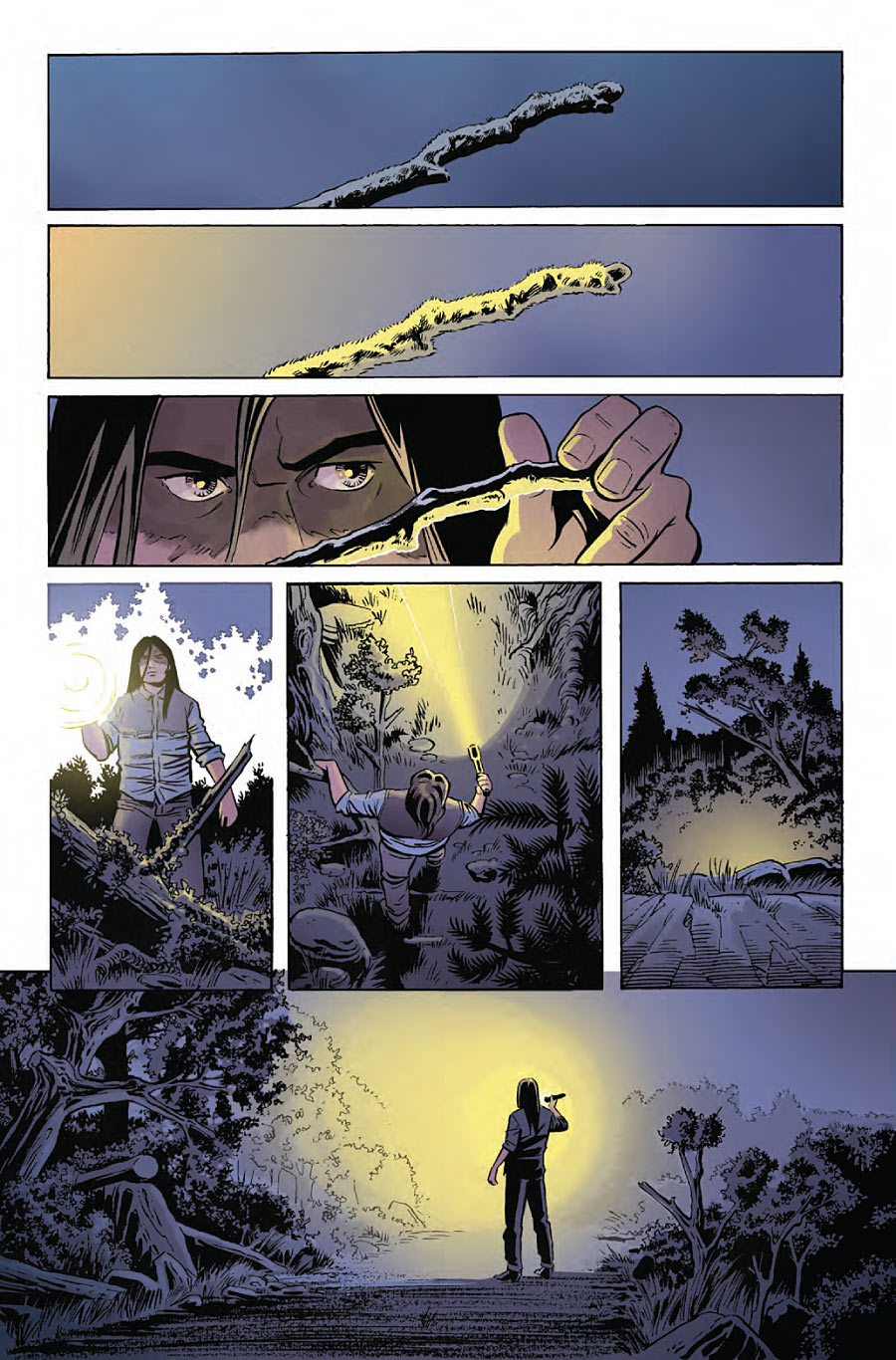 BiC: Aside from Red Wolf, you have an upcoming creator-owned book, North, coming out from Dark Horse this year. You are working with some big names on this project including Michael B. Jordan, Bill Sienkiewicz, and Denys Cowan. Can you give us a tease about what we can expect?

Nathan: Some utterly spectacular art. I mean, really, Denys, Bill, and Bettie are in top form and have made NORTH into something truly special. It’s such an honor to work with them — any one of them, let alone all three. Michael has been a wonderful pal and collaborator as well, and this is a very special spy-fi project, one which has required a totally different approach from my standpoint. It simply is a different sort of story and the progression is different from anything I’ve done before. After seeing the art, though, I’ve joked many times that I didn’t really have to write anything, it stands on the the art team’s talent so solidly.

As for story, more on that soon, but I can say for now that we have put so much effort into this book.

BiC: Will you be attending any Comic Cons this summer?

Nathan: I sometimes go to SDCC (the last two years for film and TV stuff) but otherwise I don’t think I’ve attended a convention in 4? 5? years or so. Maybe one in that time—hard to do with kids! So no, no cons for me, certainly not where I’d be set up to sign anything.

BiC: What’s the craziest funny thing you have experienced working in comics?

Nathan: Oh lord, all of comics is crazy and funny, that’s like trying to ask if there were any humid days when I lived in Georgia. Comics has led me to some pretty extraordinary and awesome moments; I’ve been made an honorary Battlestar Galactica crew member by Captain Adama himself, I’ve done karaoke with publishers and editors, I’ve spent weeks in serious and earnest discussions about alien biology in story development with people I grew up admiring, and I’ve seen Superman save my infant daughter on the pages of a DC comic book. I’ve discussed military secrets with the New York Post and talked about The Punisher’s favorite LA restaurants. Comics is fertile ground for wild, new ideas which means you just never ever know where you might end up doing any given weekday.

BiC: What’s the best way for folks to stay up to date with you?

I’m focusing less on comics this year (I have some projects that collaborators have put their heart and soul into and so we will see those through of course) but I’m enjoying some work in other places in entertainment, including running a company I started, and details of that stuff will pop up in those places in due time.

BiC: Appreciate you taking the time to answer all of these questions.

Nathan: My pleasure, thanks for reaching out!