Midnighter and Apollo team up to take on The Unified and protect the citizens of Modoran from his genocidal actions. Meanwhile, Amanda Waller and the Suicide Squad engage The Unified’s creator, Henry Bendix. How does it fare? 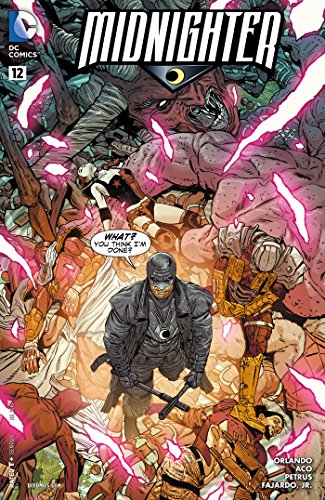 Writer Steve Orlando and artist Aco put us straight into the action in Midnighter #12. The Suicide Squad, The Unified, and Apollo and Midnighter are in an all-out war against each other as bodies, buildings, and vehicles fly all over the place. The scene is chaotic and Aco does a great job of showing just how much damage and carnage is taking place in the city. It is absolutely brutal.

While Aco lays out the chaotic, violent scene in the city of Fando, Orlando provides an interesting dialogue between Amanda Waller and Henry Bendix which morphs into a villain monologue that provides an interesting look into a power-mad psychopath and how he sees ordinary citizens and human nature. It’s a quite fascinating bit of writing that really provides depth to the villain and shows just how evil he is. Unfortunately, Bendix’s monologue is cut short and thus our look into the character as well, at least for this issue.

Within the story there are some sudden battlefield changes with certain characters switching sides. Orlando does his best to ease this transition with some nifty lines from Deadshot and Midnighter; however, it still falls a little flat and you will have to suspend your disbelief just a little bit. 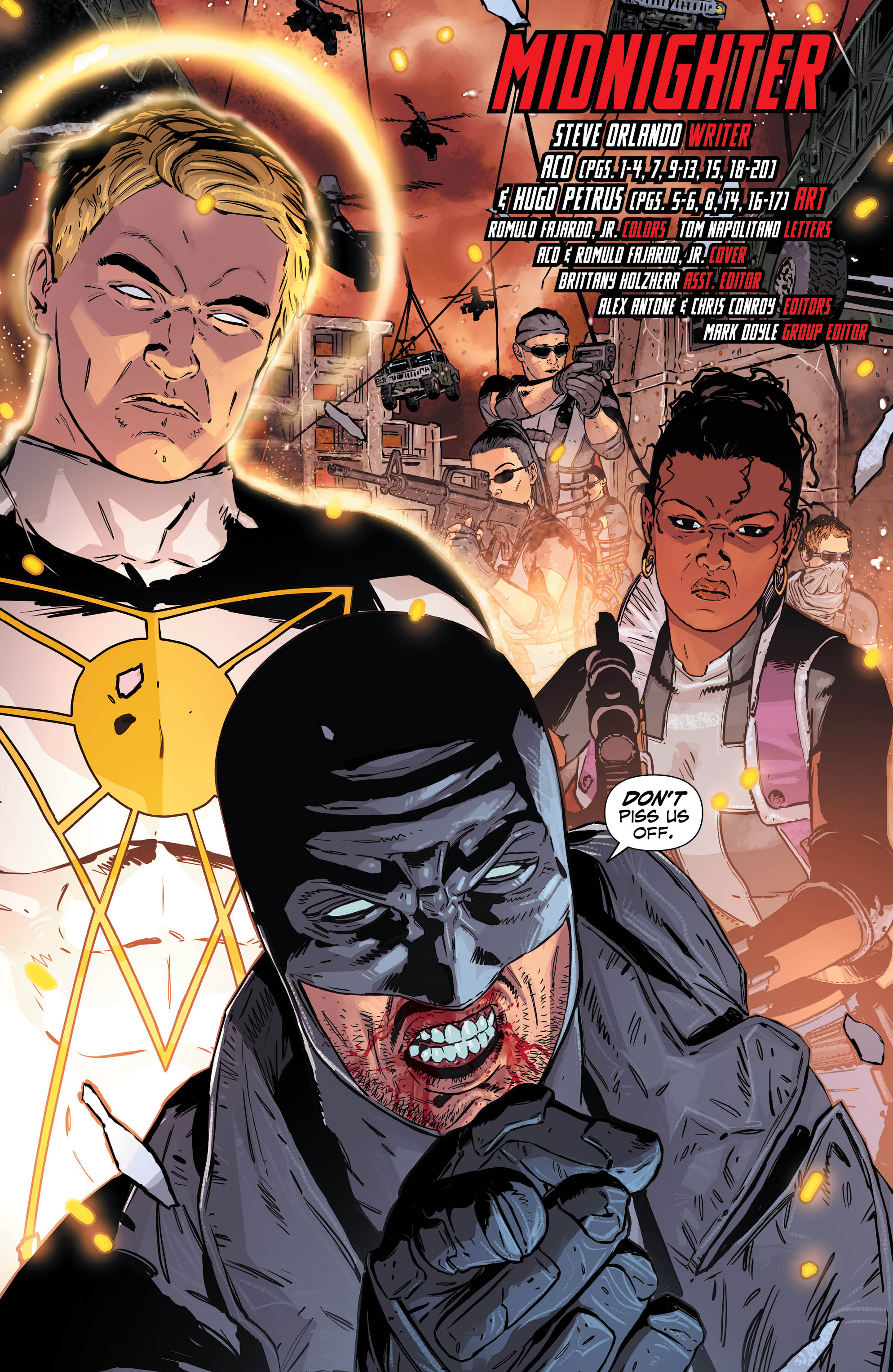 As with previous issues, Midnighter #12 uses two artists throughout the issue. In this issue it is Aco and Hugo Petrus. You can definitely tell when the artists switch places. Aco has a much more rough style and rarely uses any white space aside from panel borders. On the other hand, Petrus’ style is a lot cleaner and smoother and isn’t afraid to make use of white space.

I definitely prefer Aco’s work on this book as it aligns more with Midnighter’s rough and tumble personality. Aco’s work also gives Apollo and Midnighter a god-like feel. There are a couple of panels depicting Apollo high above the city looking down and then a subsequent one that zooms in on his face; you are just in awe of him.

Nevertheless, both Aco and Petrus are fans of these tiny inset panels which have been a unique addition since the book began. They can really capture a character’s emotions and highlight key points during action sequences. However, they also make the pages extremely busy. At times, it can be difficult to figure out what exactly they are highlighting. 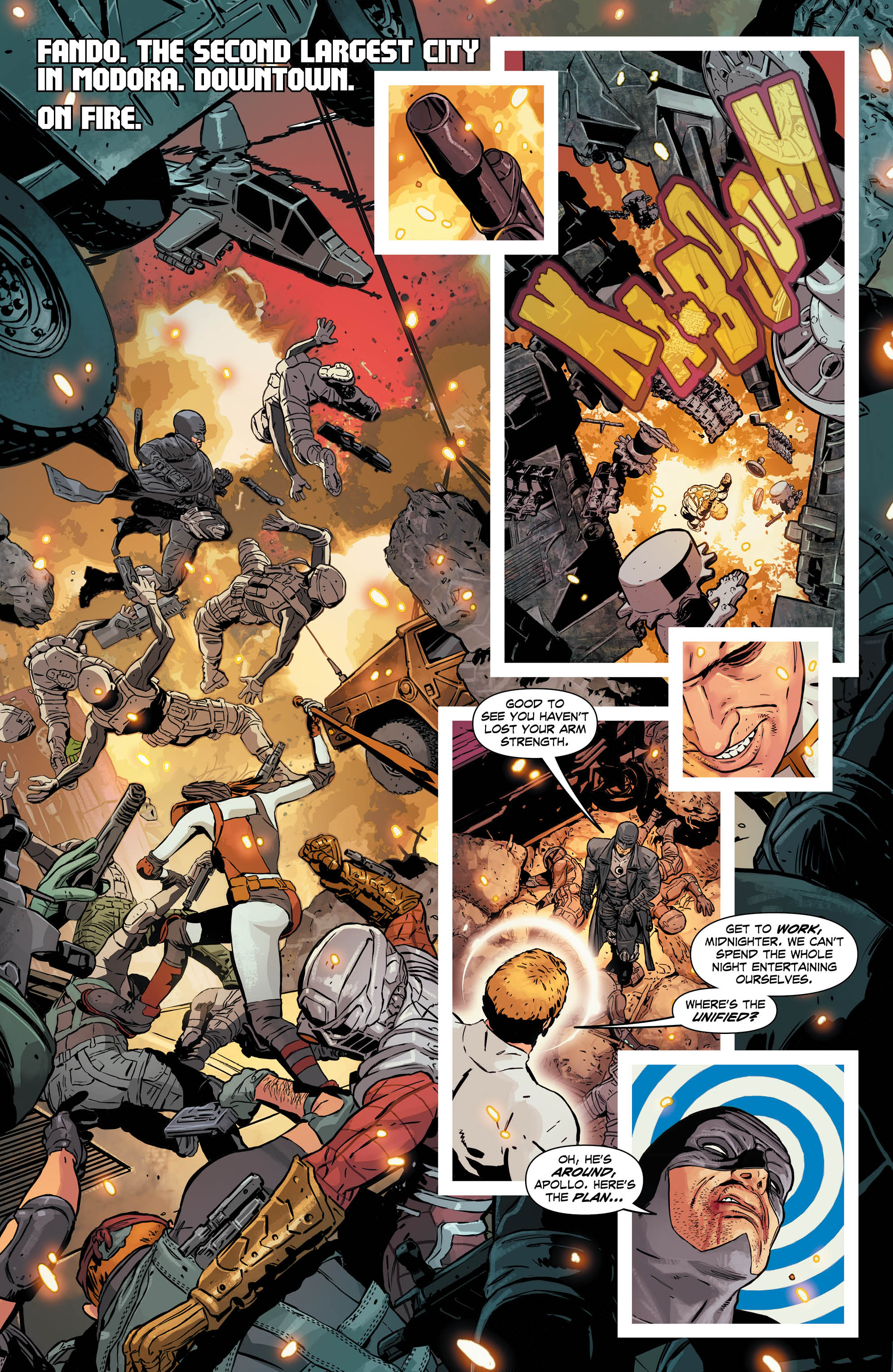 The lettering for the most part is decent. There is a really awesome climax panel that makes great use of sound effects. However, there are also times where the sound effects cover up the artwork and you can’t figure out what exactly is happening; you just hope you can infer from the surrounding panels. It can get a tad frustrating.

As for the story, Orlando wraps up the battle sequence with an effective strategy. I enjoyed how Midnighter interacted with Waller and the rest of the Suicide Squad. He definitely has nailed down Midnighter’s character. To prove it, he has Midnighter check in with all of the important people in his life and all of the different relationships he is managing. You get to see the man behind the mask. 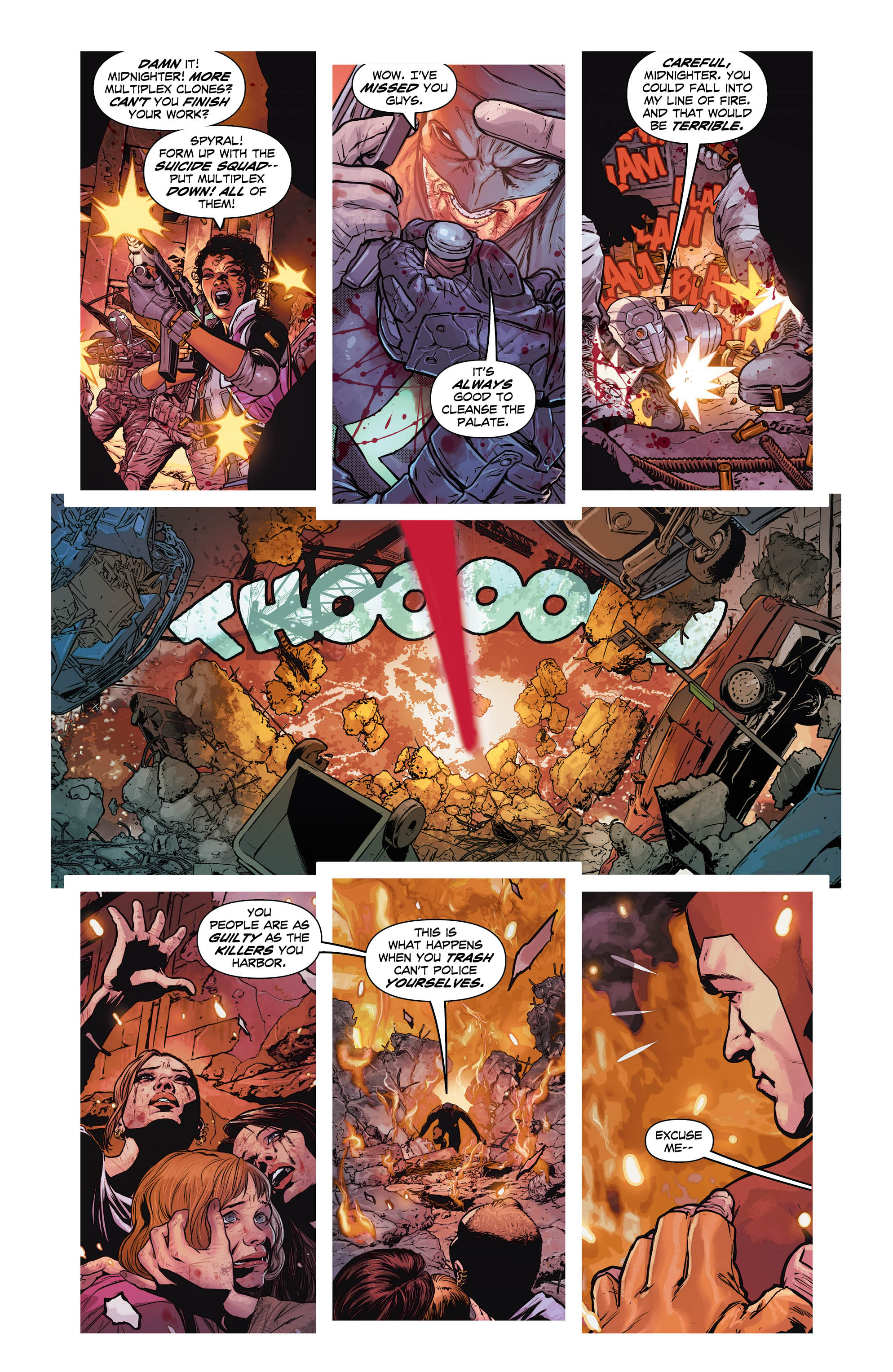 Midnighter #12 is a well done, final issue. It has intense action, interesting character development, some intriguing conversations, and a solid look into Midnighter’s life and relationships. There are some problems with the sound effects covering up parts of the art and the vast number of inset panels making the action pages quite busy. If you are looking for some solid action and a good character story you can’t go wrong with this one. It’s definitely a title that deserves a rebirth.