Frank Cho is a master at drawing sexy, yes that’s right sexy, and in particular sexy women. In some circles of internet comic fandom this makes him controversial. There are also seems to be trend in the last decade or two of comics moving away from the hypersexualized female form, most in particular the hypersexualized female form in skin tight clothing. It was the sort of thing that Marvel and/later Image Comics was pioneering back in the 90s with artists like Jim Lee, Marc Silvestri, J. Scott Campbell, and the late Michael Turner.

Cho continues to draw sexy women, and really has no shame about it. He seems to revel in his lack of political correctness, just Google Frank Cho outrage covers and you will see images he created specifically to anger the PC police that monitor the internet.

The thing is though, Cho is a master comic book artist. He isn’t just the guy that draws sexy women, he is also the guy who can draw dynamic fight scenes between heroes and villains, monsters, aliens, and even funny cartoon animals. He isn’t a one trick pony, he really is one of the best in the business and is remarkably well rounded. So it is hard to dismiss him as just the guy that can draw sexy women.

So when his new art book, Apes & Babes, was up for review, I was quick to raise my hand to have the opportunity to review it.

Apes & Babes is a compilation of incomplete sketches, inked artwork as well as fully colored and rendered pieces that Cho has done for mostly Marvel Comics and the various publishers he has worked for. There is even a small section of Liberty Meadow’s drawings for fans of his earlier work. 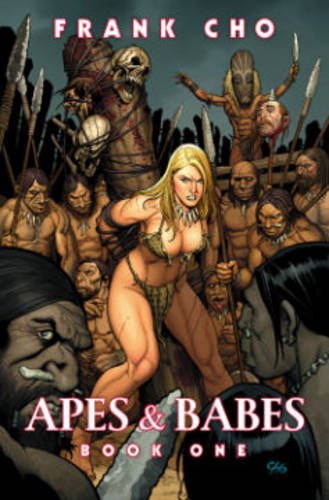 Front and center in most of these pieces though are in fact sexy women. In particular, Carol Danvers a.k.a. Ms. Marvel makes up a large chunk of the Marvel Comics images.

As much heat though as Cho gets for his art from time to time, I would have to say that he draws a much more flattering and realistic looking woman than much of the early 90s creators did. Cho’s women tend to be busty, but also strong looking. They have muscles and look as if they could kick your ass.

When I look at his work I feel like I see hints of older comic book creators. Creators like Robert Crumb and Bill Ward, who also are somewhat notorious for drawing sexy women. Ward drew a more sensualized female figure, while Crumb was known for drawing stronger looking ladies. Both included humor, which is something Cho’s work has a heavy dose of.

Yet, it isn’t the pictures of women that really stand out in this anthology. Instead, it is some of the work he did that didn’t feature them at all. In particular, one that shows Ares from Dark Avengers smashing dozens of Iron Man armors with his battle axe, and another that shows Heathrow Huston from Rick Remender’s Fear Agent standing on a rock in space overlooking a pile of corpses.

What is great about this book is the before and after drawings. For most of the pieces, we get to see a pencilled image and then an inked and colored image. These side by side comparisons are unusually enjoyable to see. It gives you a sense of the process in which the art goes through before it is ready for publication.

Apes & Babes is a great art collection from someone who is very skilled in the comic book craft. Frank Cho draws excellent male and female characters, but is best known for his female ones, despite being talented in all aspects of drawing. However, his large splash action pages are what really stand out. If you are looking for a fantastic art collection and are a fan of Frank Cho, you will definitely want to pick this one up.