A boy flanked by his Father and Mother; a lone gunman ambling toward them. A striking image known to all Batman fans, and one that sets the stage for another successful entry in Tom King’s “I Am Gotham” storyline. New heroes Gotham and Gotham Girl take center stage in this wouldbe origin story, revealing an optimistic start not unlike the Caped Crusader’s own beginnings. David Finch’s pencils continue to delight, matched well by the rustic and antiquated colors of Jordie Bellaire. Theirs is a Gotham laced with brown fog, a city that has clearly seen it’s share of poverty and villainy. As the growing threat finally reveals itself can these masked amateurs help Batman face the coming storm?

Like many in the DC universe Gotham (the hero) was once saved by none other than Batman. It inspired he and his sister to a life of philanthropy and later superheroics. A refreshingly lighthearted origin that parallels perfectly with Batman’s own tragic birth. The partnership between these heroes is proving to be both entertaining and hilarious. It’s especially fun to watch Gotham (the hero) “geek” over his budding mentorship under Batman. King knows just how to weave a compelling tale, teasing the looming villain perfectly with the final panels in Batman #3. Though this may not be the most dangerous threat Batman or the city of Gotham has ever faced, it’s great to see the creative team make use of a critically underutilized villain. 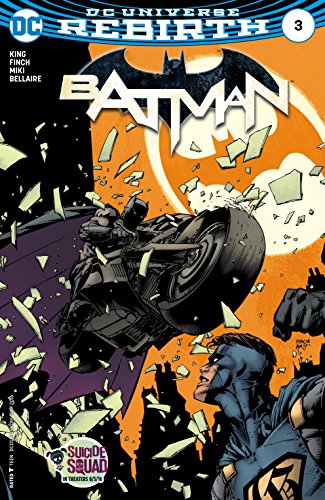 Though fully revealed in Batman#2, the glimpse of Dr. Hugo Strange in Batman #1 was a simple and effective homage to Bob Kane and Bill Finger’s own first issue. Not often counted among the “heavy hitters” of the Batman Rogue Gallery, Strange has remained mostly on the sidelines save for brief cameos or appearances. This might be due to his being seen as more of a diabolical plotter than a brawler or mastermind capable of going toe to toe with Batman. As the first villain in King’s run he’s making a triumphant return to the exact comic in which he debuted. This is a perfect villain choice for the new Batman writer: utilizing a recognizable foe not burdened by any baggage from recent arcs or interpretations. As his plan reveals itself it’s exciting to see what twists and turns he has for Gotham’s new hero triumvirate.

Finch’s pencils, inked by Batman veteran Danny Miki, are as sharp as always. The Rebirth cape and cowl continue to be one of the starring aspects to this series, removing all doubts about the light touches of yellow and purple. While the costume is key, the action is the true highlight here. One can’t help but awe at the intense visuals brought on by something as simple as a collapsing bridge. The city of Gotham has never looked so wonderfully dark and dreary.The large and modern cityscape resembles a mix of Greg Capullo and Christopher Nolan. The art team had some of comics’ biggest shoes to fill, taking over for Capullo and colorist FCO Plascencia. They’re quickly proving themselves more than worthy successors. Though David Finch has had a storied history with Batman, this may just be his greatest work on the character.

Batman is not Gotham, he is better than Gotham. Batman’s ultimate goal is to inspire lasting change in the citizen’s of his city. Tom King’s newest introductions are the embodiment of that change. The more time we spend with heroes Gotham and Gotham Girl the veil is lifted and the once mysterious duo are becoming interesting and earnest additions to the city’s cast of characters. Tom King does a fantastic job of balancing the action and detective work with lighthearted scenes featuring a sassy Alfred and Matches Malone. Harkening back to where it all began, the pieces of King’s puzzle are forming into an excellent tale in Batman #3. Equipped with fantastic art and a mix of nostalgia and originality, King and company are putting a lasting signature on the mantle of the Dark Knight.