When broken down to its essential elements, Dear Creature, ought not to work. Grue, a grotesque sea mutant that preys on canoodling teenagers he finds on the beach, happens upon the plays of Shakespeare tucked into cola bottles and thrown into the ocean. He becomes so enamoured with them that he learns to speak in iambic pentameter and peppers his speech with Elizabethan flourishes. Eventually, Grue decides to venture onto land, determined to track down whoever’s responsible for tossing the pages into the sea. The person he finds, though human, is clearly facing troubles of her own and together they embark on a most unlikely courtship.

The premise sounds at once terribly pretentious and utterly daft, and in many ways it absolutely is both of these things. However, writer and artist Jonathan Case approaches the story with such care and wit that any misgivings I might have had going in were utterly dispelled by the end of the first chapter. What followed was a charmingly off-kilter fable about love, language, and inner demons that will stick with me for some time to come.

What really helps to sell the story is the surprising amount of humour throughout, especially in the form of certain supporting characters, such as Larry, a luckless rookie cop, and the gang of wise-ass crabs that follow Grue around, acting as both devils on his shoulder and a kind of sarcastic Greek chorus. 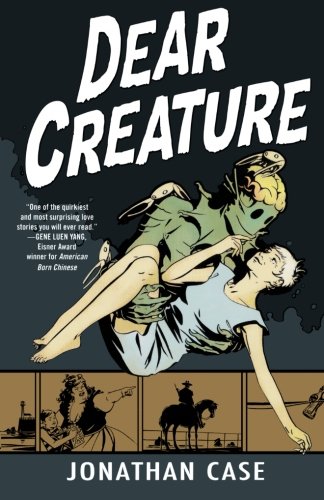 As for Grue himself, for all his monstrousness, he has a Muppety cuteness to him that makes him a curiously charming protagonist (despite his morally dubious penchant for eating hormonal teenagers). His Shakespearean patter will certainly be offputting for some, but just as when reading Shakespeare himself, it’s surprising how quickly one grows accustomed to it.

Case renders the story in beautiful, flowing black-and-white illustrations that are somewhat reminiscent of the 1960s monster comics that inform the setting, albeit with a much greater level of detail and consistency. The lack of colour, or even shades of gray, is an interesting stylistic choice that mostly pays off, accentuating the nightmarish elements with creeping shadows and turning the sea into an inky black pit. But as accomplished as the artwork is, it is Case’s weird fabulist writing that really sets this book apart.

Originally published as a paperback in 2011, Dark Horse is reprinting Dear Creature for the first time in hardback, with a new drawn introduction from fellow graphic novelist Craig Thompson. Not everything deserves the luxury hardback treatment, but it’s hard to argue against it in this instance. With Dear Creature Jonathan Case has created a strange, heartfelt modern fable that deserves to be read and reread for years to come.