“Bet you wish you let The Rogues escape this time, Flash!”

The Rogues return in all their glory with Captain Cold leading the charge with a new and improved cold gun. Will they finally have their victory over The Flash?

The Flash #17 is a nonstop, drop dead, drag out fight between The Flash, Captain Cold, and the rest of The Rogues. Writer Joshua Williamson and artists Carmine Di Giandomenico, Davide Gianfelice, and Neil Googe push not only our hero, but The Rogues to their limits. This is the issue we’ve been waiting for since the Rogues Reloaded story arc began!

Williamson’s dialogue is great. The way Barry tries to reach out to Captain Cold and The Rogues is phenomenal. It also shows Barry’s true character and how he will try to negotiate, resorting to violence as a last resort. He is constantly trying different negotiating methods to reach out to Snart to reach the “hero” Barry believes is inside him.

Not only is Barry’s dialogue done very well, but Snart’s is exceptional. Williamson showcases his meticulous nature as he describes the detail and process that went into his brand new gun. However, it also shows just how Barry is getting to him and how Cold can twist Barry’s words against him. It’s some great word play that shows why we love Captain Cold as The Flash’s top rogue!

The story is just as good as the dialogue. It’s a full on battle between The Flash, Captain Cold, and The Rogues. And with conflict, Williamson, Di Giandomenico, Gianfelice, and Googe get The Rogues to fully embrace their villainy and ditch their antihero tropes. They are pushed to the limit and go beyond it. There is no turning back from the decisions that are made within The Rogues. They are fundamentally reshaped and by doing so are even more dangerous than ever. 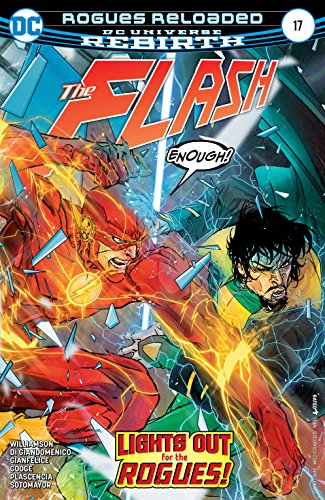 And with that danger comes exciting storytelling. Williamson, Di Giandomenico, Gianfelice, and Googe pit our hero against almost unbeatable odds and find creative ways for him to overcome them that are true to The Flash’s abilities and his personality. They also explore who The Flash is fundamentally and why he does what he does. It’s pure fun. If there is anything that takes away from the story, it is some random panels with Kid Flash that tease out the next story. These panels would probably have been better served in the next issue, allowing for this to be fully The Rogues vs. The Flash.

The art is exciting with tons of action on every page. There is a lot of classic Captain Cold versus The Flash fight sequences with Barry breaking out of ice and Cold launching new waves of attacks against him. But the fight is made personal when the art takes us from sweeping landscapes of the fight to up close and personal panels of Cold and The Flash. It adds to the deep emotional impact the two characters have on each other.

One of the highlights from the art side is the ability to capture emotion on all of the characters’ faces. You can see Barry’s desperation as he launches a massive attack against Cold, or Golden Glider’s determination when she finally has The Flash in her sights. There are even some comedic moments when Trickster’s big smile is erased in one panel when The Flash sets his sights on him.

The art is also clean. There isn’t much clutter. It highlights the action and keeps the story flowing at a crisp pace. In fact, it moves so fast, you’ll be done before you even know it!

The colors by Ivan Plascencia and Chris Sotomayor are bright and vibrant. They do a great job of distinguishing Cold’s normal gun versus his new and improved one by adding dark purple streaks. It works doubly well when it is contrasted with The Flash’s red and orange lightning. They also do a great job of using bright colors to draw your attention to the action as well as to dictate moods. At one point, they flood a panel with bright light to showcase sheer joy.

The Flash #17 is a phenomenal entry. It gets to the heart of these two iconic characters, Captain Cold and The Flash, but also redefines them in new ways. Not only does it redefine these two characters, but it redefines The Rogues and their core principal. The action is highly engaging and entertaining with a wide bevy of different attacks. The Flash #17 is so good it demands you read it. Go and buy it now!