New York Comic Con is in full swing. DC’s main headquarters is now in Los Angeles, but they were a New York presence for a long time. Unsurprisingly, they have quite a few announcements in store for this weekend. They made one of their announcements by showing off a new cover.

At the Diamond Retailer Breakfast for this week’s convention, DC revealed the new banner logo for every comic as of December. It’s a major departure from the typically blue logos the company has had for years. Though it doesn’t change the main brand logo it does give it a distinct new framework. It’s a sign of the studio’s desire to return to the times of yesteryear. 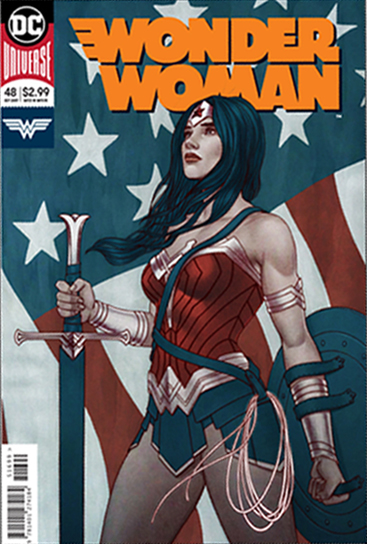 This image reveals the cover for Wonder Woman #48, revealing DC’s new logo to replace the Rebirth banner logos. The DC logo at the top is the same logo for Rebirth. The rest of the design is a simple curved ‘Universe’ above the lettering and price. As revealed with other covers teased at the event, the colors change based on the title.

To Infinity and Beyond

The end of Rebirth isn’t something to fear. For the last few years DC has branded itself based on the current Universe-defining event. Flashpoint evolved into the New 52, then Convergence took us into Rebirth. Despite the publisher maintaining numerous titles, or returning to previous numbering, every couple years their needs to be another reinvention. As sales start to normalize DC is adopting a different strategy.

This return to form will help DC in multiple ways. Firstly, comic readers will return. The DC Universe was torn asunder in the last decade. Fans see these events as gimmicks, and obstacles that get in the way of a writer’s run on his or her character.

One more reason the return to regular is good for DC. Titles from all publishers are often derailed by tie-ins and event comics. When the DC Universe returns to a classic style, not every title will have to interact. Not every hero will have to make an eventual appearance in another’s comic.

Without a new status quo to adhere to the artists will tell their stories the way they should be told.

Back to life, Back to Reality

Any Comic Con is a treat for the fans. From news about publishers to panels with artists, the audiences see their favorites talk about their favorites. The New 52 was the end of an era for comics and a recreation of the beginning. To see what could change the future.

Whether or not the New 52 saved or starved the comic world is one for debate. It forced all major publishers to move into the future with a different message and a departure from the norm. DC is rebuilding themselves once again, but with the same foundation.