Piotr Rasputin, a.k.a. Colossus, has for the most part been a mainstay X-Men character. His duty to uphold the ideals of Charles Xavier and need to sacrifice himself before others makes him a hero that most other characters strive to be. The speech made by the CGI Colossus at the end of Deadpool embodied so much of that character to the point of hilarity, especially when Wade Wilson expectedly took a different path. Even the manifestation of his powers came about when he was trying to save someone else, his sister Illyana.

However, this was not always the case. In issues leading up to Uncanny X-Men #304, a number of events had been building up in the life of Piotr Rasputin to affect his decision to leave the X-Men, and take on the role of a villain. He decided that the ideals that Charles Xavier had been chasing weren’t working, and that he was finished with upholding them. The events were just pressure points on a man already damaged from a world that hated him or wanted to use him. It was only this much that took for the tin man to break.

The Death of His Sister

The Russian government abducted Illyana Rasputin, Piotr’s sister. The Russian government intended to experiment on Illyana to awaken her mutant abilities. They needed her powers to combat another mutant named Soul Skinner. However, the X-Men along with Colossus infiltrated their base and rescued her. Yet not without consequence. Illyana became one of the earliest victims of the Legacy Virus. It took her life, and left Piotr without any family members left.

Piotr had suffered a serious head injury during the rescue operation. The battle left him so that he had to remain in his metallic form. In his altered state of thought, he rethought Professor Xavier’s position of pacifism and peaceful coexistence with humanity. Colossus ultimately rejects the philosophy, getting into a heated argument with the Professor during Illyana’s funeral. 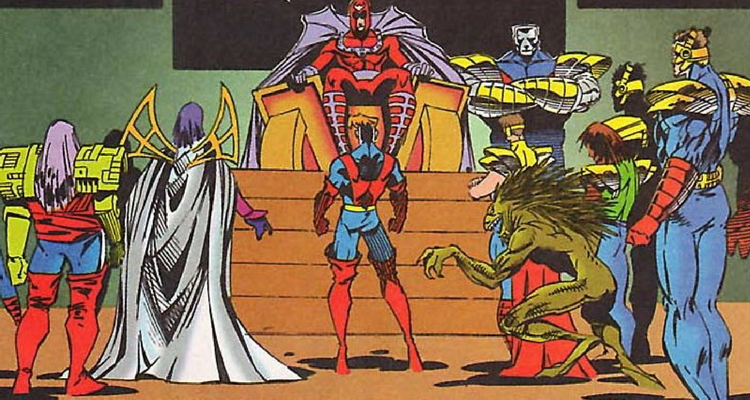 Magneto had built a floating fortress, Avalon, for mutants who sided with his way of doing things. He created a team of his own in his Messiah complex, naming them the Acolytes. During the funeral for Illyana Rasputin, Magneto and his team touch down to earth. He invites all who are willing to walk a different path from Xavier to ascend to Avalon. A battle ensues and the X-Men seem to have the upper hand in the fight against Magneto. That is, until Colossus joins the fray and beats back the X-Men, assisting Magnus in fighting them off. In the end, he ascends to Avalon with the rest of the Acolytes.

The brain damage subsides and eventually Piotr is able to return to his non-metallic form. He also is in his right mind and realizes the wrongs that Magneto and his Acolytes are committing. However, he stays aboard Avalon for a time in an attempt to change the system from the inside. He is unsuccessful at turning the Acolytes around, and finds that he doesn’t belong. Colossus eventually leaves the ranks of the Acolytes, returning to earth’s surface. He searches for the only person he perceived cared for him, Kitty Pryde. With that he also joins the ranks of the British mutant team, Excalibur.