“The Death of Mighty Thor” kicked off in The Mighty Thor #700 which saw the monstrous Mangog kill Thor’s goat Toothgnasher and Malekith’s dark army kill Karnilla, Queen of the Norns.

The oversized epic is just the beginning for Jason Aaron, James Harren, and Dave Stewart’s new story line. Not only did Thor #700 see two of Thor’s allies killed off, but we also got a glimpse into what Jason Aaron has cooking for the future of Thor. In a double page spread by artist Russell Dauterman and color artist Matthew Wilson, we got a glimpse of the future when Karnilla sees where the threads of fate are leading just before she dies.

You see a lot teases for upcoming stories here. Some of those stories will play out in the pages of THOR. Others will play out elsewhere, some across multiple titles. Between THOR #700 and MARVEL LEGACY #1, I’m really setting the stage for the biggest stories I’ll be doing for Marvel in 2018. Probably the biggest stories I’ve ever done for Marvel, period. You see a lot of that set-up here, and I’m beyond excited for everybody to see where it’s leading and what it means for Thor, not to mention the rest of the Marvel Universe.

In that double page spread you can see the new Thor design by Russell Dauterman. Along with the new design there is a ton happening. Loki appears to be wielding the Infinity Gauntlet, Mangog looms in the background, Frost Giants are walking through a frozen city, Asgard appears to be in flames, and Namor is flying out of the blue! What could it all mean?

“We’re not going to explain the meaning behind all the various images on that double-page spread,” says Editor Wil Moss, “but we want to hear our readers’ best guesses! Drop us a line at [email protected], and mark your emails ‘Okay To Print’!”

Here’s an isolated look at the new Thor design:

The design continues off Aaron’s run with Dauterman on Mighty Thor. You can get a look at Odinson’s design on the cover of Mighty Thor #19. 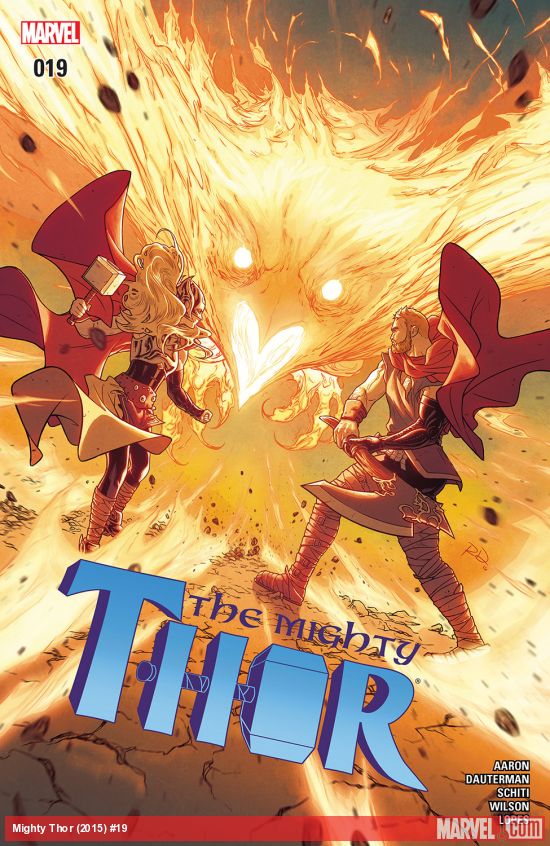 The big difference appears to be his legs and boots as well as the more pronounced clasps holding down his cloak. I’m not going to lie, the new design looks really cool. I just might have to go pick up Thor #700 and jump on this ride.