“How can you see Superman fly and not be inspired? He will find Batman. I know it.”

Barry Allen is ever the optimist, one of the many reasons Joshua Williamson’s run on The Flash is a great read. He’s created a new villain and done more than enough to make his mark on the mythology. However, The Flash #33 is about best serving its role as a tie-in to Dark Nights: Metal. In that it succeeds greatly. This is a can’t-miss addition to the Dark Nights: Metal mythos.

With the help of fantastic artist Howard Porter, Williamson writes a fantastic tie-in to an already long series. Barry uses the Speed Force to send Superman into the mercy of the Multiverse. He believes he can find Batman, the key to stopping this invasion. The fastest man alive is always eager to help a friend. Williamson happens to make Barry a shining light in what is now a very Dark Knight in Keystone City. 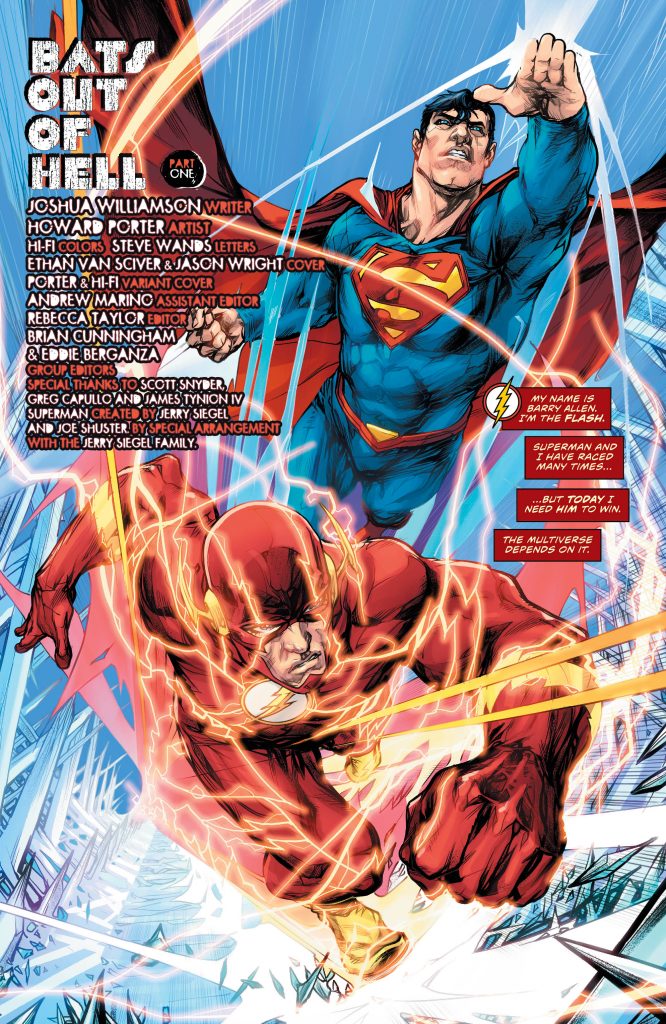 Earth is in ruin. Every continent and every country has fallen to the Batman Who Laughs and his vile forces. Williamson gives an epic adventure for so few pages. Almost the entire Justice League guest-stars, making this a significant entry into this blockbuster event. The “final” designs the twisted Batmen have for the Justice League may have been revealed at the end of the issue. An intriguing twist on a frequently used part of Bruce Wayne’s history as the corrupted Batmen face their respective League member.

The transitions between massive action and deep turmoil can be jarring. Barry never really feels in danger; the League never feels on the verge of death. But it does little to hamper the fun and excitement.

Like the tie-ins that feature the individual Batman stories, this issue adds weight and emotion to the overall story. The many threads that make up the story are coming together. In the hands of Joshua Williamson, the event is as exciting as it is in the hands of Scott Snyder himself. The Flash #33 is an entertaining read that has both stakes and humor.

Just Look at that Finish 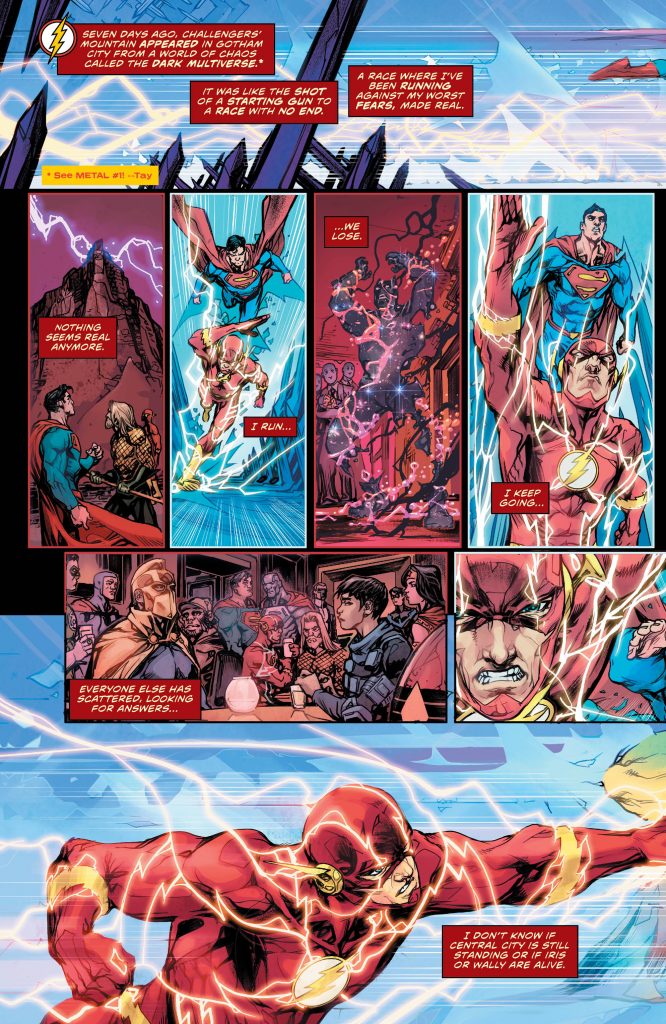 Howard Porter is another one of DC’s many marvelous talents. He is a very prolific artist, spanning everything from Superman to Justice League 3000. Due to his versatility his work can easily tell a ridiculously funny story or a dramatic and introspective story. Here, he gets to do both. His pencils can be striking and firm or sketchy and antiquated. It’s a great touch and one that brings memories of classic Justice League stories from the 80’s and 90’s.

Hi-Fi is another great addition to the book. The colorist also known as Brian Miller is not always Howard Porter’s colorist, but when he is the two create some of the most vibrant and lively pages on the shelves. Every panel and shade capture the reader’s attention with a life that leaps off the page. Therefore making Hi-Fi one of DC’s many great color artists.

Joshua Williamson’s most famous work before The Flash is a wonderful murder/murderer story called Nailbiter. The difference between the books is unimaginable. Now having written multiple books he deftly switches between superheroic fantasy and horror. But in the pages of The Flash #33 he gets to explore both genres. The world is under the terrifying reign of these Batmen. it’s up to Barry and his meta-human friends to save the world. Unfortunately, the Dark Knights have some plans of their own.

Howard Porter and Hi-Fi join Williamson for the tie-in. Porter is a classically trained artist who draws muscle-clad heroes and explosive, furious action. Unsurprisingly, his work is the perfect companion to the bewitching words that Williamson puts to the page. Porter won’t be on The Flash for long but together with Williamson they are a team worthy of a long, long run.