Twitter user Stuck on Bucky made his case with three screenshots from the new footage. The screen shots show Steppenwolf looking at the camera with a man wearing a red cape and wielding what appears to be a lightning bolt in his right hand. In one of the screenshots the all out attack by the character even draws Steppenwolf’s attention as he turns to face this new foe.

A number of people weren’t buying the idea that this is Shazam. Others claimed it would be Zeus.

It makes more sense that this would be Zeus given the other soldiers appear to be Amazons. 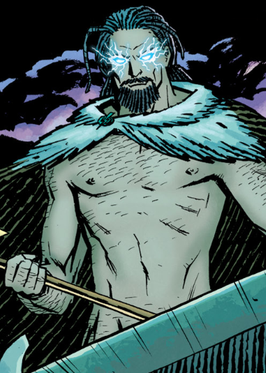 However, one keen observer noted this might not be the Billy Batson who becomes Captain Marvel or Shazam. It could be The Wizard who was Shazam before Billy Batson.

The Wizard was Shazam before Billy

And he’s right. Shazam is the wizard who gives Billy Batson the powers of the Elders which include Solomon, Hercules, Atlas, Zeus, Achilles, and Mercury when he says name SHAZAM! aloud.

In the New 52 line of DC Comics, Shazam would take on a number of names including Mamaragan and The Wizard. He was a simple citizen of Kahndaq, a fictional country located in the Middle East., before he became The Wizard. He would eventually flee Kahndaq after it was invaded by the evil Ibac and his Mongol horde. Eventually he would ascend from mortality to godhood and become the aboriginal god of lightning and the weather. Upon ascending he joined The Council of Eternity.

What does this Mean?

It’s highly possible this could be The Wizard. We know from the trailers Bruce and Diana speak of the Age of Heroes and how it must come again. The original Shazam in Justice League might be someone from the Age of Heroes.

Another theory could be this is a Shazam from an alternative universe that Steppenwolf and the armies of Apokolips defeated. This would explain why we see Robin Wright’s Antiope in the trailers. We know she died in Wonder Woman so it would be hard for her to come back to life in Justice League, which presumably takes place after Wonder Woman.

However, if we really want to get deep, Wonder Woman may be set in a completely different universe than Justice League and Batman v Superman: Dawn of Justice.

Get to Know Steppenwolf