Beware of Spoilers to Dark Nights: Metal & The Flash #33, Ye Who Enter Here

Scott Snyder has created one hell of an event. Many writers and artists from across the DC Universe are helping to craft the story with fantastic tie-ins. One of the many issues that plagued the New 52 was an abundance of large events that would span and subsequently ruin several other titles. The main story would take place in the titular character’s series, like Batman or Superman, and series like Nightwing or Batman and Robin would suffer. Ever since Rebirth, DC has been careful to stay away from such stories. But now that Dark Nights: Metal is a critical and monetary juggernaut the tie-ins are out in full force.

However, Dark Nights: Metal is a different beast. Every issue feels like a stand-alone story with its own identity. The Flash #33 is no different. In fact, it revealed some of the biggest secrets yet. Beginning with the first glimpse of the horrors these creatures have planned for our heroes.

Allegory of the Batcave

The Flash #33 ends with our heroes in one of their most desperate situations yet. They’ve each fallen to the Batmen of the Dark Universe, leading to their capture. Though they were safely locked away in the Oblivion Bar they’re now each trapped in a monstrous location. This is a perfect mutation of an already great concept. Batman had once created plans to stop each of his fellow team members should the need arise. Now that Batmen are taking over the world, it only makes sense for their master plans to be uniquely devious.

It’s unclear whether or not each of the Justice Leaguers will have to face their respective Batman, but it’s unlikely. What’s more likely is that each “BatCave” is designed with some hideous contraption or monster to face them. Snyder has always been self aware with his storytelling. The works he creates have unique narratives that stay away from comic’s usual suspects.

For one thing, it’s a well-known cliche to have a character face a villain who is an opposite or shadow version of themselves. It’s been done in everything from The Legend of Zelda to the upcoming Black Panther film. To have Aquaman face the aquatic The Drowned Batwoman or to have Wonder Woman face The Merciless Batman would be too obvious. Instead, Scott Snyder likely has something more destructive in store in Dark Nights: Metal.

Who’s Behind the Curtain?

The Batman Who Laughs is a very interesting character. Little has been revealed about what happened to his own world. Only one small detail was revealed in the pages of The Flash #33: The Tower of Babel. Many fans will recognize the storyline from Mark Waid and Howard Porter’s run. Porter was also the artist for the aforementioned Flash issue and did an amazing job. The story referenced is about Bruce Wayne’s plans for the Justice League. Should any of its members decide to rebel or fall prey to an unknown force, Batman has the capabilities to stop them. It’s a disturbing fact that destroys his trust with the League and leads to R’as Al Ghul using the information against the team.

Before revealing his major plan, the Batman Who Laughs talks about one such story. Where his Justice League discovered his plans, leading to an unknown situation. There’s a few clues there. It’s unclear if the decision about the line came from Snyder or Williamson, but because of its importance it’s likely the former.

But the Batman Who Laughs, seen here in a design by Boss Logic, is simply a servant to something greater.

It’s All in the Clues

A lot of the bread crumbs in Dark Nights: Metal lead to one writer: Grant Morrison. The entire series takes place because of his having created the 52 Multiverse map recently in the genius series Multiversity. In fact, one of the Batman Who Laugh’s Robin servants is seen holding a copy of the Multiversity hardcover. However, there’s another massive clue in the pages.

Barbatos was first mentioned in the pages of Grant Morrison’s Time and the Batman. He was a force that mixed itself in the force of Batman’s travel through time, ultimately becoming the man-sized Batman that would ultimately lead to the inspiration of Batman. It’s an interesting notion to explore with his presence in Dark Nights: Metal. According to his own history, he apparently created Bruce Wayne’s path to Batman as a portal for his own entry into this universe. However, Barbatos first glimpsed Bruce as he made his way through time. Vandal Savage also played a large part in that story.

As an immortal himself, he was also a character Morrison could readily use as a constant presence throughout history. It’s possible Savage and Barbatos are also connected, or that Savage is an asset that will be used later on in the series. What is clear is that the Batman Who Laughs is a servant. He bears a striking resemblance to the Mouth of Sauron, a Tolkien creation seen here in The Lord of the Rings: Return of the King.

As the character seems to be the “mouth” of Barbatos it becomes easy to draw the comparison between the two. The problem is the comparison ends there. The Mouth of Sauron is not necessarily an important character, while the Batman Who Laughs is. He is obviously the most complicated of the Dark Knights. He is a combination of complete opposites, leading to seemingly the most evil character of them all. However, there are quite a few questions about the Batman Who Laughs and his history. The reference to the Tower of Babel was an obvious clue. One that leads down the rabbit hole to how this series just might conclude.

There’s a key image from the marketing campaign that many people forget, and it’s this: 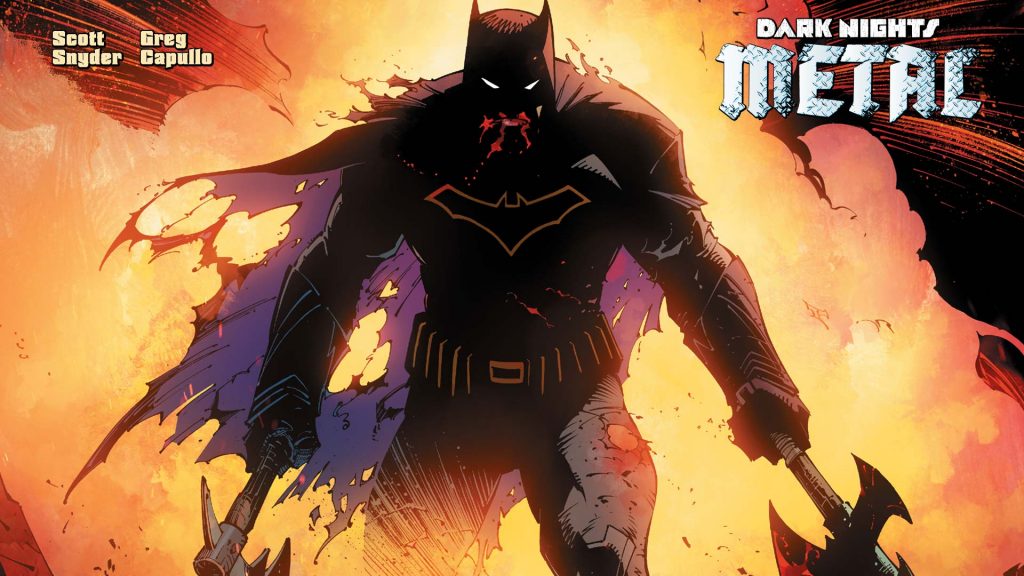 Batman will undoubtedly wield axes against his greatest enemies at some point in this series. But how does Batman return, and if he does, how does that not solve the problem itself? If he’s the reason they can be in this universe, will his return mark their departure? Probably not. We know Superman encounters what we believe to be Bruce Wayne who attempted to warn him away. Now, Clark and Bruce have both become batteries for the evil the Dark Knights and Barbatos. That leads to two major conclusions.

The first is that if they’re freed, Barbatos will be weakened somehow. The second is that as mentioned before, they’re return won’t spell the end for the Dark Nights and their god. Just that the villains will be weakened and our returning heroes will be pretty damn mad.

Now, when the Batman Who Laughs mentioned his plans to his Universe’s Justice League, he was likely giving the League a clue. We learned from a previous issue that Batman has been attempting to communicate with the League or Superman in various ways. Either by sending a signal or some coded message he only thinks they’ll understand. However, Snyder didn’t leave anywhere near enough clues for the reader to put together the messages that have been left so far. But what if the clue wasn’t the messages themselves, but that Bruce is sending messages in completely unconventional ways? What if by mentioning the Tower of Babel storyline to this Universe’s Justice League he was letting them know that Batman has such plans in the first place.

Now that the League has this knowledge, they may just be able to use it against a team of Batmen who happen to each resemble a member of the Justice League. Batman’s plans against his own teammates will come in handy when facing Batmen who’ve essentially become corrupted versions of other Justice League members.

The Batman Who Laughs is possibly our own Earth-0 Batman combined with the Joker. If this is the most sought after Earth, if this is the defining Earth for these Batmen to take over, it’s because it’s the best Universe. The best Universe likely has both the best heroes and the best villains. What would be the most corrupted, evil version of Batman? Certainly not any of the ones that combined themselves with a Justice League member. Yes, those are corrupted characters that are essentially “evil”, but they’re not the Joker.

The Joker is the complete opposite of Batman. The Batman Who Laughs is the consequence of those opposites combined. The Batman Who Laughs is slowly “leaking” Bruce Wayne however, and is peppering clues throughout the story for the Justice League. The presence of The Sandman is something that changes things. He warned Bruce of his path but at the same time affirmed that it was the right one. What if Bruce was destined to become fused with the Joker, because the subsequent creation would be the ultimate savior?

Batman combined with the Joker sounds like an idea almost too awesome to be true. And yet, here it is in the pages of Dark Nights: Metal. The dichotomous existence of this creature is likely the point of the entire event. Scott Snyder is famously well-versed in the relationship between the two. To see the literal form of the ying-yang combined into one murderous, metal, and leather-clad demon is one of the most badass things ever witnessed in comic pages. The reason the Batman Who Laughs has done nothing but talk so far is because his ultimate point and powers have yet to be revealed, whether they’re good or bad.

But needless to say, we ain’t seen nothing yet.