Tessa Thompson created quite a stir earlier this week when she revealed that Thor: Ragnarok’s Valkyrie is bisexual in the upcoming movie.

However, it doesn’t appear that Valkyrie’s sexuality in the movie will be explicitly addressed.

Thompson confirmed, “YES! Val is Bi in the comics & I was faithful to that in her depiction. But her sexuality isn’t explicitly addressed in Thor: Ragnarok.”

YES! Val is Bi in the comics & I was faithful to that in her depiction. But her sexuality isn’t explicitly addressed in Thor: Ragnarok. https://t.co/hmb5lYN5to

In fact, before Annabelle and Valkyrie merge bodies, Annabelle kisses Valkyrie. However, Valkyrie tells her, “Now is not the time.” And separates from her. 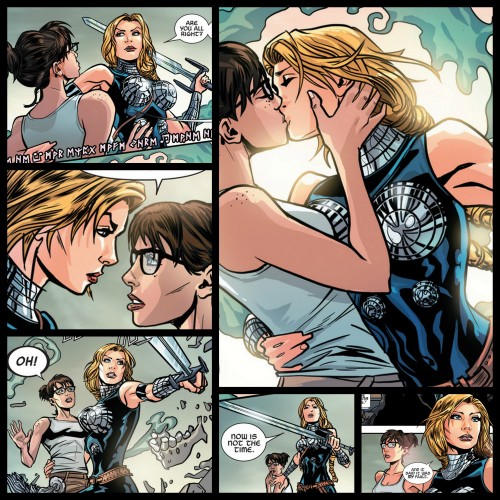 Imprisoned on the other side of the universe, the mighty Thor (Chris Hemsworth) finds himself in a deadly gladiatorial contest that pits him against the Hulk (Mark Ruffalo), his former ally and fellow Avenger. Thor’s quest for survival leads him in a race against time to prevent the all-powerful Hela (Cate Blanchett) from destroying his home world and the Asgardian civilization.

Thor: Ragnarok hits theaters on November 3, 2017. It currently has a 97% positive rating on Rotten Tomatoes. Will you be watching?