Oh man oh man, 2017 is looking to end on a high note for Marvel’s Netflix fans.

I thought The Punisher’s November premiere would wrap up the year for us, but I was wrong. One of the Devil of Hell’s Kitchen’s most dangerous foes, Wilson Fisk will return for Season 3.

Marvel Television and Netflix announced Vincent D’Onofrio will make his return to Marvel’s Daredevil as the Kingpin, Wilson Fisk. I can wait to be dazzled again by D’Onofrio’s on-point performance as the businessman willing to burn down Hell’s Kitchen in order to rebuild it.

It makes sense that D’Onofrio and Fisk would return given the final scene at the end of The Defenders that showcased Matt Murdock laying near-death in a hospital bed.

Comic book fans with sharp eyes caught how it was an almost identical scene as the title page to the “Born Again” story arc. 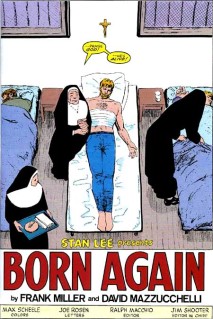 With the return of the Kingpin, Daredevil Season 3 is going to be chalk full of action, to say the least.

Also slated to return will be Deborah Ann Woll, who plays Karen Page. As we’ve seen in teasers of the Punisher, Karen Page might find herself overwhelmed in the dark, nasty, areas of New York City. In the Daredevil: Born Again comic, Karen ultimately betrays Daredevil in order to get a drug fix. She sells out Matt’s identity as Daredevil to a local dealer who quickly reports it to Fisk.  Kingpin doesn’t beat around the bush and quickly moves to destroy Matt Murdock’s life. While it appears Murdock’s life is already on the outs, it’s unclear what role Karen will play. However, Kingpin still doesn’t know the identity of Daredevil. But that might not matter because he knows Matt Murdock put him in prison.

In Season 2 Kingpin threatened Murdock, “I have something to say to you. When I finally get out of this cage, I will dismantle the lives of the two amateurs that put me in here. You, Mr. Murdock and Franklin Percy Nelson … I’ll chop both the heads off of that snake.”

Elden Henson aka Foggy Nelson will also return for the third season of Daredevil.

Vincent is an exceptional actor who returns with the incredible gravitas he brings to Fisk. We’re very excited how Marvel’s Daredevildevelops through the creative lens and guidance of our new showrunner, Erik Oleson.

Marvel’s Daredevil Season 3 is expected to hit Netflix sometime in 2018.

If they follow a similar marketing strategy that was seen with The Punisher. We can expect to be teased on the official date up until the very last few weeks before the premiere.

Are you ready for the return of Wilson Fisk?