Remember Deadpools amazing marketing in 2016? Well, it looks like the team wants to one-up their performance from last year!

Collider reports there’s a new magazine kingpin in town, who just happens to be the master of the house!

In a very similar fashion to the marketing of the first Deadpool movie, the team is once again taking an unorthodox route to promote Deadpool 2. Instead of lighting up social media with a trailer and promos, we’re getting something special. 20th century Fox put together a special issue of Good Housekeeping where Wade Wilson shows off his domesticated side, and I fully expect a few recipes related to tacos and chimichangas! 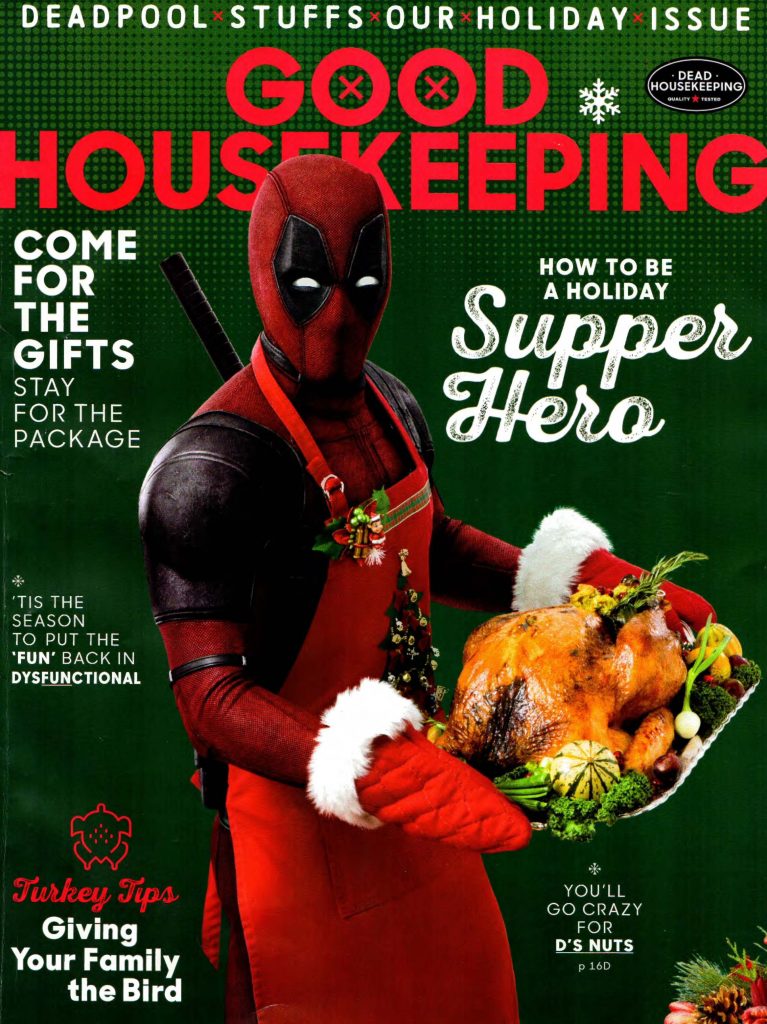 As you can see with the cover. Our favorite Merc with a Mouth is all kinds of ready for the upcoming Holiday Season. Just from looking at the cover we can see that it’s just screaming Christmas with the right amount of greens and reds. Then, you see all the goodies that is in this special edition of Housekeeping. One thing that caught my eye was at the bottom right of the cover. “You’ll Go Crazy For D’s Nuts.” And if you thought that might just be a cover prank, boy are you wrong. There’s a full recipe for D’s Nuts! 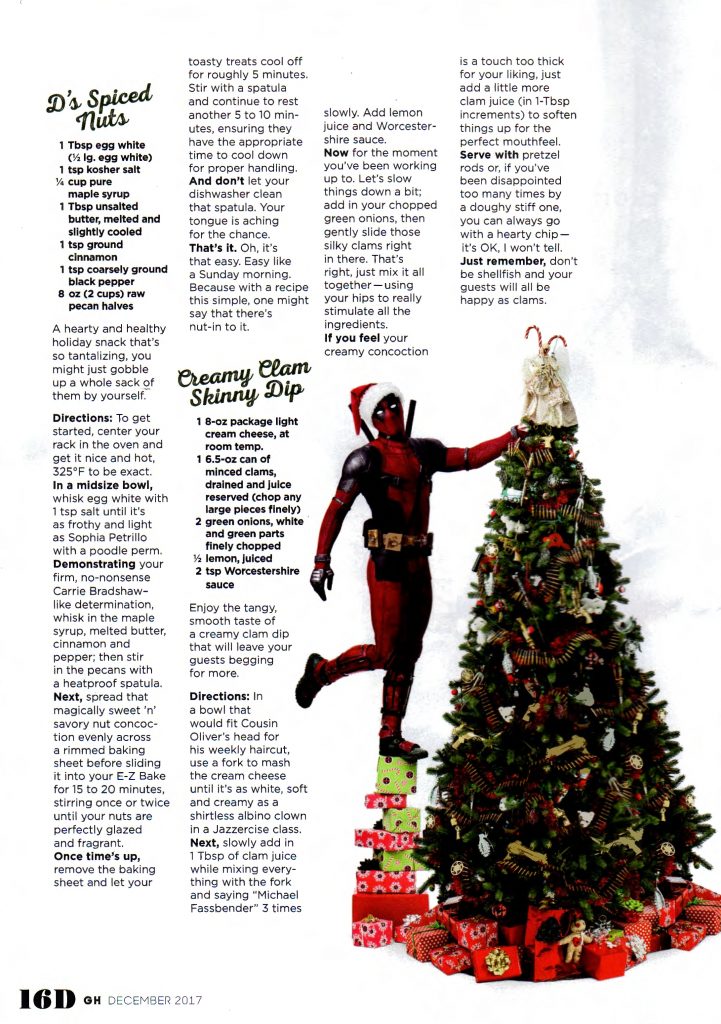 On this page of recipes, we find D’s Nuts along with some other great Deadpool inspired recipes. All of which I could imagine would make any holiday event better.

The issue starts with a heartfelt letter that only Deadpool could scribe. 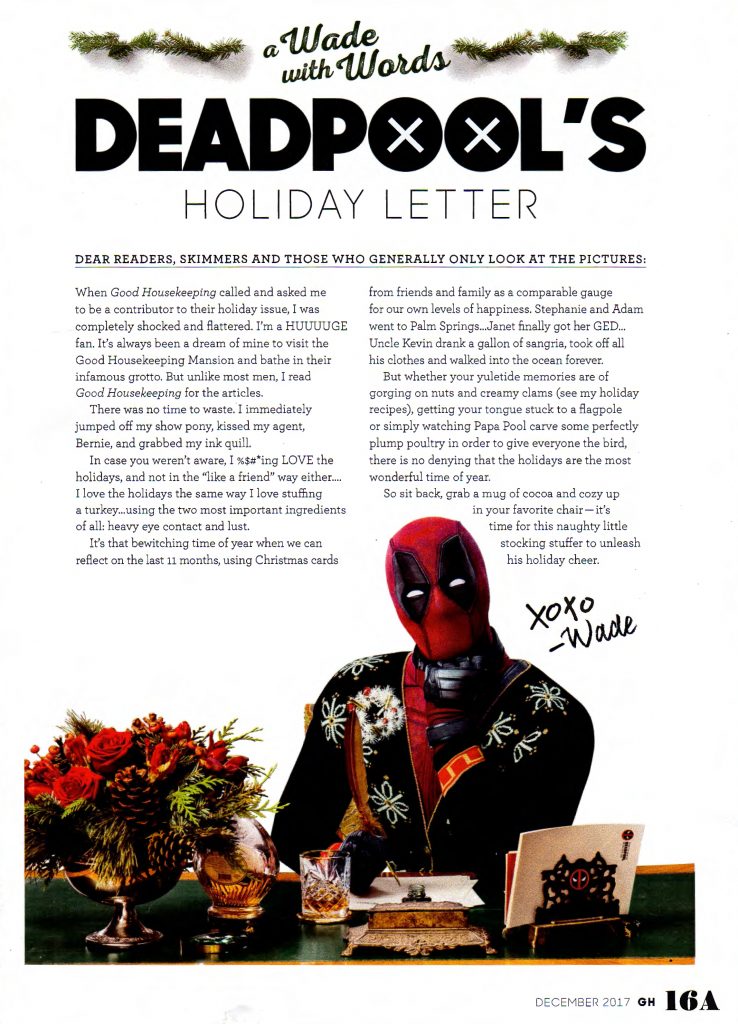 Then the magazine goes on to teach you how to work a turkey and a whole ton of other goodies. 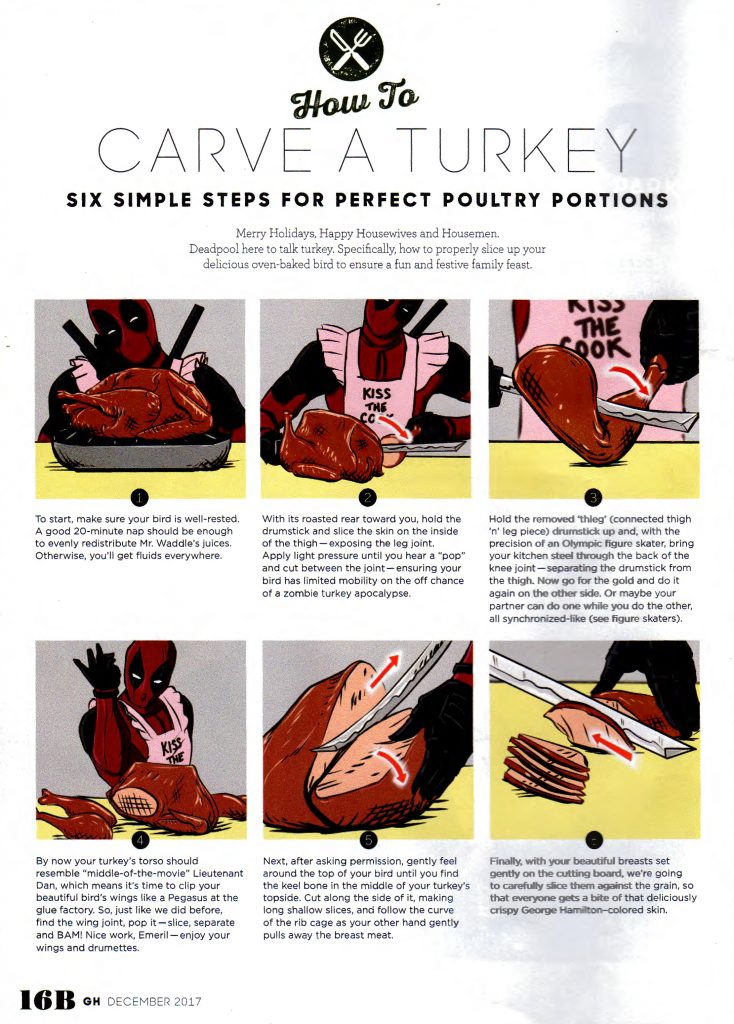 Good Housekeeping Editor in Chief Jane Francisco had some kind words about the amount of harassment her staff endured before they finally let Wade have his way:

Deadpool’s persistence to be in Good Housekeeping was impressive – initially we had no idea who he was, let alone that he was a fan of the magazine. But after repeated attempts to ignore his… passion… we came to a compromise. He could appear in one issue, if he promised to stop leaving care packages at our editors’ homes and agreed to maintain a 50-foot distance from the Good Housekeeping offices and our staff.

Deadpool responded to the process to make the issue became a reality:

After years of weekly emails and countless carrier pigeons, Good Housekeeping finally returned my calls. And while it’s a dream come true, apparently we have vastly different opinions on the definition of a ‘holiday spread’…

Looks like until the sequel comes out, Deadpool will be busy spreading that holiday cheer.