Last month the New York Times ran a story about the cult that provided some super creepy details about what they do with their members. The cults brands its members like cattle and physically assault those who do not recruit well enough. They even label their recruits, “slaves” according to the Daily Mail.

NXIVM purports itself as a self-improvement group that offers classes and lectures that are supposed to help one lead a better and more fulfilling life. This picture of the group is contradicted by reports and claims by former members who say that it’s nothing more than a cult. One which allows founder Keith Rainere to groom his victims

NXIVM’s former spokesman Frank Parlato revealed to The Sun that an “Emmy Award-winning actress” is a “key recruiter” for the group’s female sub-group, DOS. The Daily Mail shortly revealed that the person Parlato was speaking about was none other than Allison Mack.

The role of Allison Mack within the cult is further detailed in Parlato’s own blog The Frank Report. In it, he claims the Smallville actress created the female subgroup DOS. While, Raniere is at the top of DOS, Mack is his second in command. Mack runs a group of her own “slaves” who are ordered to recruit their own “slaves.” The master-slave hierarchy structure continues from there like a pyramid.

Slaves are reportedly recruited to immediately answer their master when they receive a call or text. If they do not recruit enough “slaves” they are beaten with a paddle on the butt.

The Frank Report details that Mack introduced the corporeal punishment to the group.

DOS according to Parlato stands for Dominos “Obsequious Sororium.” This translates literally into The Obsequious Sisters. However Parlato elaborates, “the actual Latin has a gender specific meaning. A man is dominant, the women are submissive.” Parlato also says DOS stands for Dominant Over Submissive.

Parlato describes that Mack and leader Rainere brand their members with their own initials. 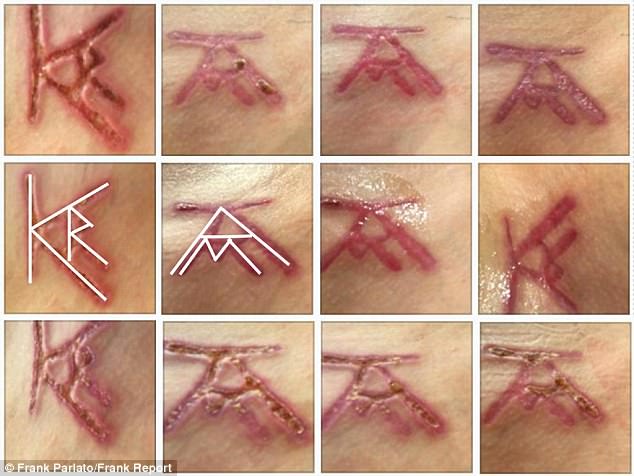 Parlato’s report also describes an extreme workout and eating regimen. He says the DOS slaves are “required to run 40 miles per week while maintaining a diet of 500-800 calories.” This is because founder Keith Rainere claims fat “interferes” with his energy levels. Members of DOS must be on call 24/7 and answer to their leaders at any given time.

The Frank Report claims Mack originally set out to create DOS as a “force for good and a female force against evil.

According to ex-members of NXIVM, only the most loyal members are given the chance to join DOS. There are stipulations to joining besides loyalty to NXIVM. Potential members must hand over “damning personal information as a show of trust.” However, ex-members claim that information is actually used in order to keep members silent about the horrors of the cult.