Alan Moore and Dave Gibbons’ graphic novel, Watchmen, may be the greatest comic book ever created. Initially, Moore pitched the series as a mature deconstruction of the Justice League. Rather than let him play with their biggest heroes, DC instead had him create his own team which to tell his story. Nite-Owl is a little Blue Beetle; Rorschach has a little Batman in him. And Dr. Manhattan is the nuclear deterrent readers know and love: Superman. With them he was able to tell an incredibly compelling story that Time Magazine named one of the best 100 books of the 20th century. 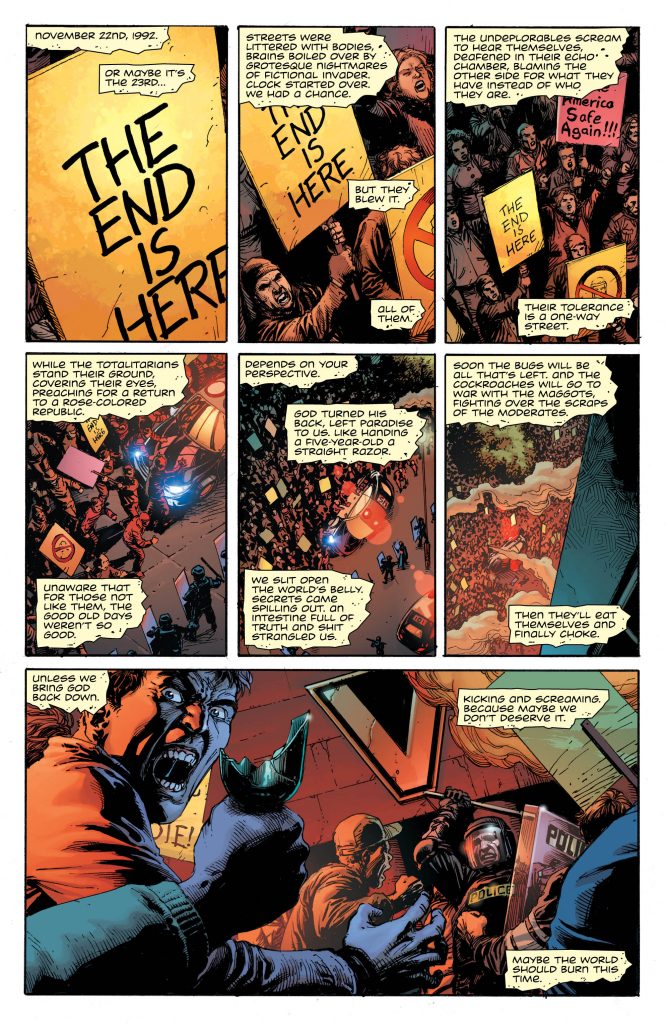 With Doomsday Clock #1, Geoff Johns has begun his long-awaited sequel to DC Rebirth. Along for the ride is frequent collaborator Gary Frank and colorist Brad Anderson. Like the work of Dave Gibbons, Frank has a classic style that can be both haunting and quaint. It makes some of the more violent aspects of the Watchmen work in the best way. While Johns and Frank don’t mirror the style of Moore and Gibbons, this is a remarkable beginning. Together this incredible creative team makes this the best debut issue of the year!

“Clock started over. We had a chance. But they blew it.”

There’s plenty of mystery lurking at the ends of the pages in Doomsday Clock #1. The appearance of the first book’s “central” character is the first clue that something is amiss. It leads down the rabbit hole of a putrid and grotesque world on the brink of war and chaos. The world knows of Ozymandias’ plot; the world knows of Dr. Manhattan’s disappearance. What followed isn’t entirely clear, but the fallout is. The world is once again on the brink of war. In fact, it would seem the current political climate is a clever backdrop for this brave, new world that has such characters in it. 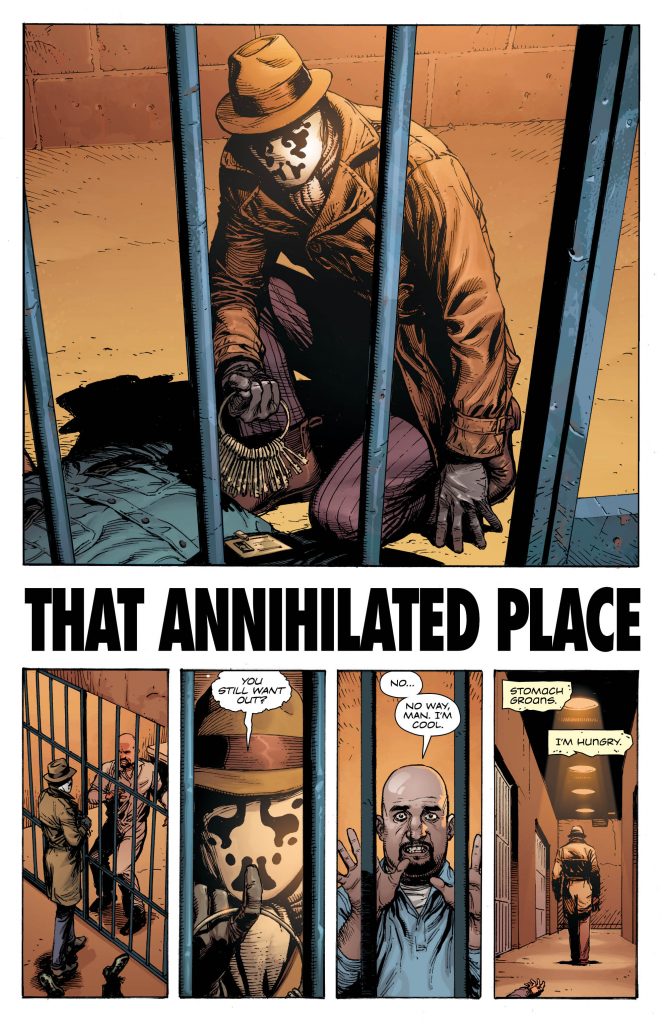 And the characters fit well. While the notable absence of a few Watchmen is unsurprising, those that do appear are strikingly well-written. Despite the identity of this Rorschach being something of a mystery he indeed sounds like Rorschach. This is the broken and flawed world that was depicted in the original graphic novel, because it very closely resembles our own. Making it all the more significant, and all the more terrifying.

“You’re out of your goddamn mind dressing like that.“

The art of Dave Gibbons is just as important to the tone of Watchmen as its scripts. While simplistic, the art perfectly captured the antiquated world it tapped into. This was a story about what could happen if some of our favorite heroes took advantage of the world in which they lived, and vice versa. Gary Frank and colorist Brad Anderson don’t replicate Gibbons’ style, but they don’t need to. Frank’s work itself is not unlike other famed artists Chris Burnham and Frank Quitely. They’re anatomy isn’t complicated; they’re settings aren’t embellished. As the enraged masses amass in the streets the bittersweet feelings brought on by the imagery only further the success of one of the most unlikely sequels of all time.

Johns and Frank have been partners in crime numerous times in the past and will be again in the future. Johns may not have a ton of time to devote to comic-writing now that he’s arguably in charge of the DC Cinematic Universe. But this issue serves as a reminder that Johns and Frank are some of the best in the business. Together, they make magic once again in the form of Doomsday Clock #1.

As ill-conceived as it is, Doomsday Clock #1 is the exciting beginning to a brand new story. While this is the sequel to Watchmen, it is also much more. Alan Moore’s original comic broke down our own world by way of the DC Comics Universe. Now, Geoff Johns sets out to deconstruct Moore’ s comic by way of…bleeding it into the one DC readers know and love. It’s remarkably simple and yet serves as a perfect template with which Johns establishes this new world. This isn’t a sequel to Watchmen simply because it contains the same characters, but because it embodies the same themes.

With Gary Frank at his side Johns is perfectly equipped to create yet another amazing comic. Though almost all of DC is starting to become his responsibility, Johns can still create one hell of a story. DC’s prodigal son once again creates an unforgettable comic. Here’s to many, many more.