Fans going to Comic-Con in Brazil are in for an awesome treat from none other than Deadpool!

The Untitled Deadpool Sequel star Ryan Reynolds revealed Deadpool was heading down to the Brazil Comic-Con and he was offering a special opportunity for fans to get exclusive Deadpool tattoos. He even promises it will be a “special memory that you will cherish forever.” Deadpool even says the 2016 U.S. Men’s Swimming team can back him up!

My mom barely has any room left on her face for another tattoo. But she’s going for it. Because she cares. pic.twitter.com/GFUNC3IWfX

The promo, of course, is full of Reynolds’ signature comedic antics as he explains to fans in character what to expect. In fact  if you want to get one of the tattoos you are instructed to head to Deadpooltattoo.com.br in order to get a spot in line. While the site is in Portuguese the layout is pretty simple to navigate for non-Portuguese speakers. When you get to the site you not only get a chance to sign up. There’s even a brand new image of Deadpool with his own tattoo gun. Take a look: 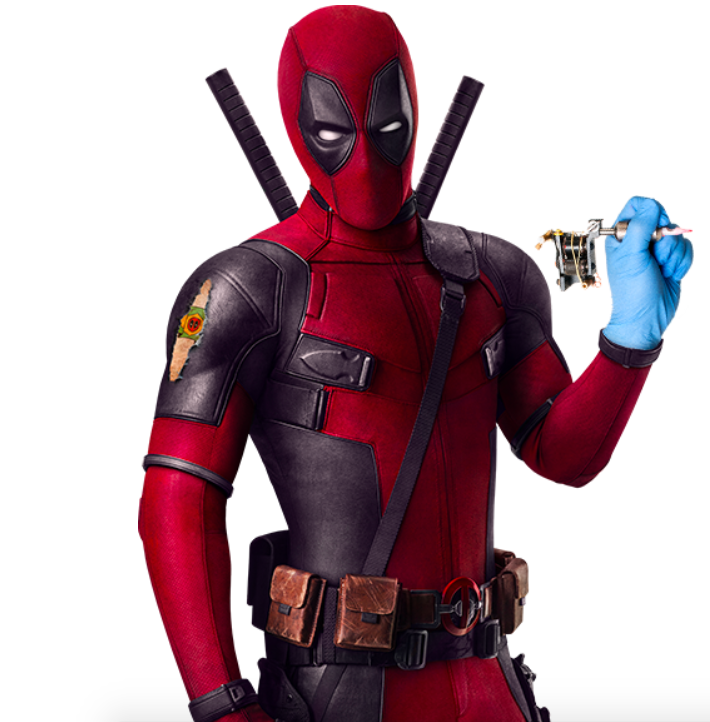 As you can see Wade Wilson is all kinds of ready to tat up fans in the promo photo. With tattoo gun in hand, he’s ready to put his face on your body forever. And not to be rude, he even has a variation of the Brazilian flag on his right shoulder with a small Deadpool mask in the middle.

There are also five Deadpool tattoos you can request.

If you’re fan heading to the Brazil Comic-Con, get signed up and have a piece of Deadpool on you forever! The Untitled Deadpool Sequel is expected to come to theaters on June 1, 2018.

Ryan Reynolds is, of course, reprising his role as the Merc with a Mouth. The film also stars Josh Brolin as Cable and sees Zazie Beetz as Domino. Returning from the first film are Brianna Hildebrand as Negasonic Teenage Warhead, T.J. Miller as Weasel, and Morena Baccarin as Vanessa.