“It was draped in shadow, and its voice… Oh God, its voice. It didn’t sound human.”

The fiercest warriors to inhabit the depths of the world meet the greatest detective to scale the heights of its city-scapes. Batman and Robin meet their mutant turtle counter-parts once again in the pages of Batman/Teenage Mutant Ninja Turtles II #1. James Tynion IV and Freddie Williams II return to give fans another glimpse into the “what if” machine. The results are fun and entertaining. A little juvenile, but considering the subject matter this is clearly geared towards kids. And with good reason. The Teenage Mutant Ninja Turtles are as funny as ever. Tynion proves he’s just as good at comedy as he is at drama.

Once again Freddie Williams II is the star of the show. His work is impeccable; his lines are perfect. His Batman, his Robin and just about every other character are each uniquely designed and incredibly well-executed. Jeremy Colwell’s colors are a wonderful addition to Williams’ work. Together they perfectly blend these two worlds. 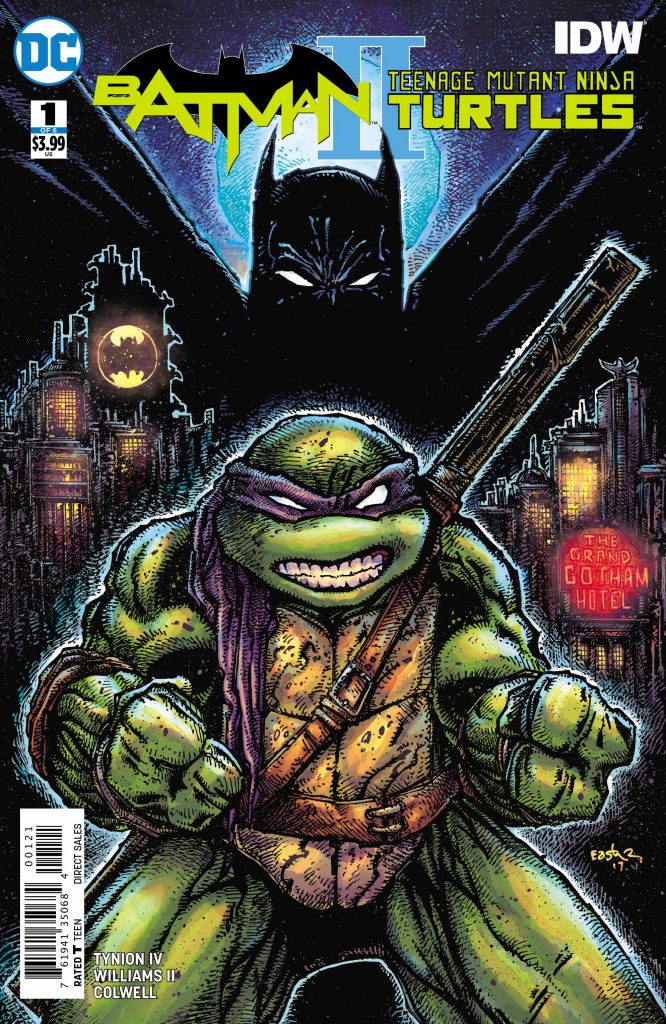 James Tynion IV has plenty to be happy about. He’s one of DC’s star writers, and has been the best writer on Detective Comics since his pseudo-mentor, Scott Snyder. But here he shows just how talented he is by writing something completely different. It is a little simple, but the story shouldn’t be overly complicated. The investigations of the titular heroes collide to hilarious and awesome effect. It was the plot to the first storyline, it will be the plot to this one.

However, Tynion is having some fun with the characters. The subplot beginning with Donatello is interesting to explore. It may not add a ton of weight or substance to the story but it’s a clever way for Tynion to flesh out the characters. With six characters who like fighting crime in the dead of night, Tynion will have to work his butt off to make sure their uniquely awesome.

“No one can master all things in one lifetime.” 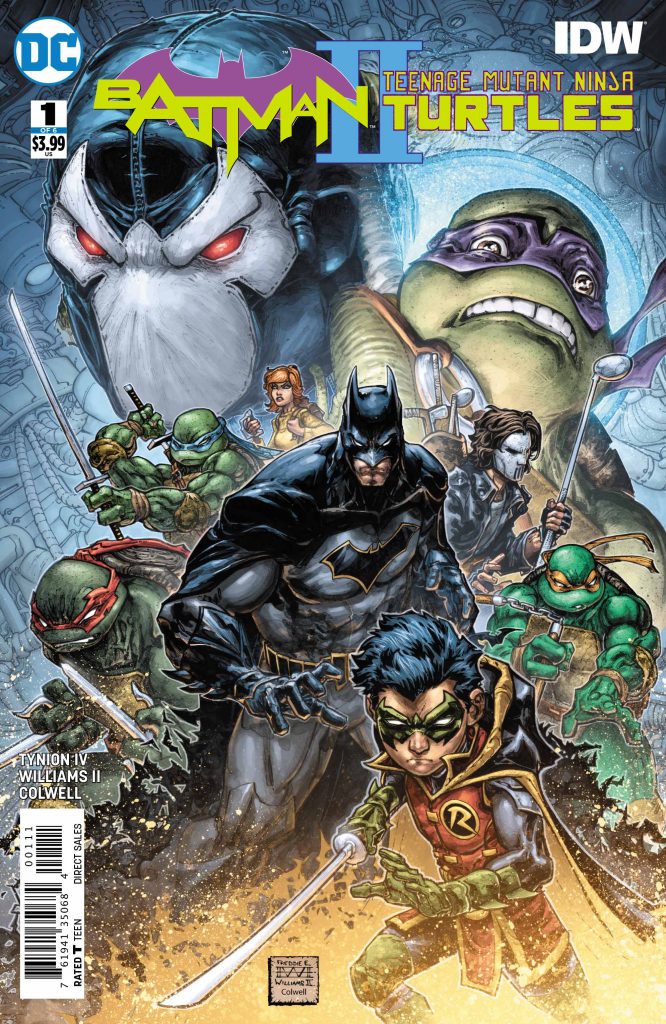 Every line along the pages of Batman/Teenage Mutant Ninja Turtles II #1 is just beautiful. That’s because Freddie Williams II has some of the most talented hands in the business. The art can be a bit “cartoony” at times but that’s in keeping with the tone of the story. This is a lighthearted bit of entertainment for all ages. The art needs to reflect both clarity and action. It’s no wonder the same creative team was brought back to craft a sequel to the first story.

Even Jeremy Colwell’s color are irreplaceable. He and Williams are both visionaries that could work on books in either category. Create dark worlds for the Batman to haunt; or fun lively sewers for the turtles to roam. The story may not be as substantial as the images that bring it to life, but it’s more than enough to warrant a return to the city.

DC and IDW’s partnership on Batman/Teenage Mutant Ninja Turtles was both surprising and unsurprising. Comic book publishers work together all of the time. The cross-overs that fans joke about in live-action films are often based on comic book reality. With some of comics polar opposites meeting. Like when Green Lantern found his way into Star Trek; or when Elmer Fudd snuck his way into Gotham City. But he isn’t alone.

A few friends have made their way into Batman’s territory. More often than not the stories don’t work; the art isn’t compelling. Not the case with Batman/Teenage Mutant Ninja Turtles.

It might be that both stories are about talented heroes fighting crime in the dead of night. With both sets of heroes spending years and years training to personify justice. Or it might be that both stories have histories filled with awesome entertainment and storytelling for all ages. Batman/Teenage Mutant Ninja Turtles II #1 may not be as appealing to the old as it is to the young, but it’s another fun trip into a ridiculous and great beyond.