A few days ago we got our best look at Tom Hardy as Eddie Brock in the upcoming Venom movie. Now, we are getting our first look at the logo as well as the tag line.

At the Brazil Comic Con a Venom movie display was front and center.   Check out the photos below.

The first photo shows a classic Venom coming out of the V. He’s got sharp teeth and all. In the next photo we see what looks to be the tagline for the movie, “We Are #Venom.” Under the tagline, it says “In Theaters Soon.”  It’s interesting they don’t have the expected release date of October 5, 2018 on the poster. It’s possible they want flexibility of the date or the film could release at a different time in Brazil than the announced U.S. release date

The coolest thing about this set up would have to be how they’re using a more classic cartoon image of Venom. This reminds me of his appearance on Spider-Man in the mid-90s. 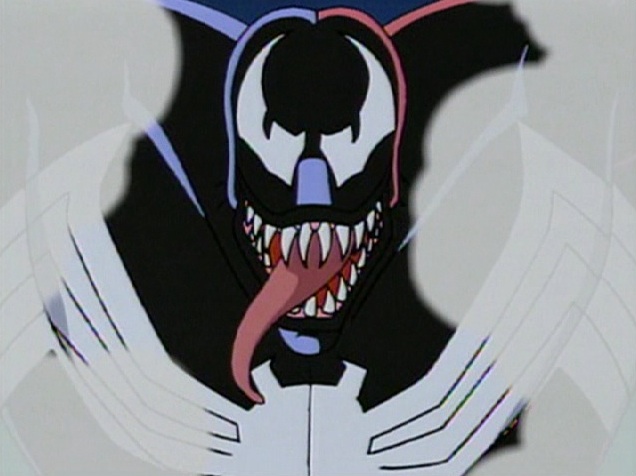 That was my first encounter with the character. It’s cool to see them use the image. It’s a good way to try and bring in the older fans who fondly remember it. Star Wars: The Force Awakens showed tapping into nostalgia works. It’s no surprise to see Sony using it.

Unfortunately, we still don’t have a good shot of what Tom Hardy will look like as Eddie Brock with the Venom symbiote, but this gives us a decent idea. But if the booth is any hint. It looks like they’re looking to capture the classic look.

The film has already done an amazing job with its casting choices. They’ve cast Star Wars’ Riz Ahmed and Oscar nominee Michelle Williams. Not to mention Tom Hardly as Eddie Brock. Each brings with them an amazing assortment of talent and industry experience. Sony is looking to capture the success of Spider-Man: Homecoming, but also potentially give us our first true villain-focused comic book movie. It’s possible they might adapt some of Venom’s anti-hero aspects though to soften the villainy. It definitely looks like Venom is getting much better treatment than he received in Sam Raimi’s Spider-Man 3.