With Avengers: Infinity War coming out in theaters next year, there were a few characters revealed in the trailer that a lot of fans had questions about. Like who is throwing the spear at Captain America? Who is prying the gem from Vision’s forehead? In the scene where a number of people are lying on the ground, who’s stepping over them?

Here we introduce an elite force comprised of the children of Thanos, The Black Order. Their task is to obtain the Infinity Gems for him, and force planets and other galaxies to pay him tribute. Thanos’ lead General, Corvus Glaive, is the one supposedly extracting the gem from Vision. Proxima Midnight is the one throwing the fancy looking spear at Captain America. It’s been speculated that Ebony Maw was stepping over the bodies of people in the scene before Loki offers up the Tesseract. We have yet to see the final member, Cull Obsidian, in the current trailer. However, I’m assuming with later trailers we will get to see more of these characters and perhaps more of their role in Thanos’ quest for the stones. 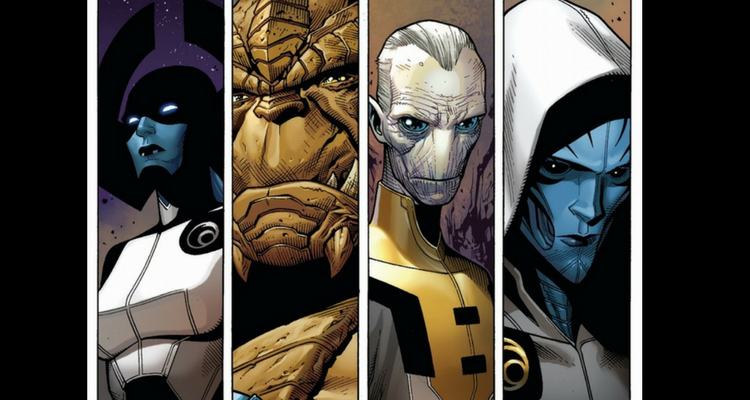 The Black Order was an elite force gathered by Thanos to obtain the Infinity Gems for him. It’s important to note that they weren’t part of the original quest for Thanos’ Infinity Gems. However, in later iterations of the comic, we see them more integrated in the story. They were briefly introduced in New Avengers Vol. 3 #8 , but only in cameo panels. Their full introduction wasn’t until Infinity #1, as aliens under Thanos’ employ, sending Outriders to planets throughout the system to find the Infinity Stones.

Ultimately, Thanos’ goal is to appease the embodiment of Death. His love for the being is driving him to do everything up to this point, in an attempt to achieve balance. The scope of his desire being so large, he will need the power of the stones to remove half the life in all the universe. In early versions of the comic book story, he takes on the responsibility himself. This was all in comic titles spanning from 1973 to 1991. It wasn’t until 2013 that Thanos doles the responsibilities of taking control of the universe to others, creating a system of universal management to ultimately serve him.

The inclusion of the Black Order to the Infinity Wars storyline is a recent occurrence. We have an order comprised of five members, the first three Ebony Maw, Proxima Midnight, and Corvus Glaive and two other members not described in the movie- Supergiant and Black Dwarf. The team of alien villains have gone through many versions over the years. This includes a run where some of the worst criminals in the galaxy were part of the group and more recently only having three members: Thanos, Proxima Midnight, and a new member Black Swan.

Corvus Glaive serves as the right-hand of Thanos. His overall task as General over Thanos’ armies is to force planets to give Thanos tribute. His powers are described as superhuman in strength, speed, durability, and endurance. This might be enough to give the Avengers pause. Yet, he is immortal to some degree, with his life being tied to his weapon. If his blade is somehow destroyed, then he dies as well.

Proxima Midnight is both the wife of Corvus Glaive while also serving as the mightiest combatant of the Mad Titan’s forces. In every iteration of the Black Order, she has been part of the roster. While being as strong, fast, and durable as her husband in every sense, she also has the benefit of almost being invulnerable. This combined with her expert combat ability makes her more than a worthy foe to the Avengers.

Ebony Maw is not so much a fighter, but a strategist of Thanos’ army. He is a genius-level intellect, able to manipulate even the wittiest minds. He is “the black tongue that spreads mischief and evil wherever he goes.” Even the most fortuitous minds have trouble dealing with his machinations, wherein he can coax even the hardest individuals into serving his means.

Supergiant was a mentally unstable telepath who sought to devour intellects. Hers powers are parasitic. She also has the ability to control minds, bending individuals and groups to succumb to her will. The difference between her abilities and Ebony Maw is simply in wills. While Maw will make the person think they are free agents in their decisions, Supergiant’s victims have no choice in the matter.

Black Dwarf is the sort of Hulk to the Black Order. His size and strength are comparable to the Hulk’s in every way, being also as durable in that his skin is unbreakable. Although being the first part of the invasion crew to Wakanda, it wasn’t Hulk who felled him in that battle. The Black Dwarf was defeated by Black Panther. For his failure, Thanos expels him from the Black Order. 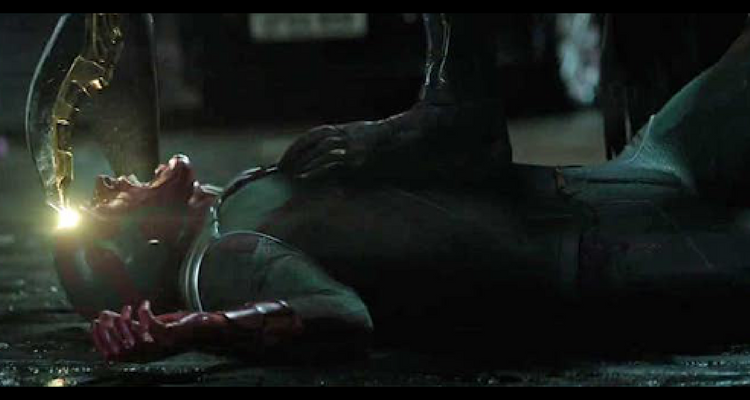 Marvel has been extremely tight lipped about the Black Order. However, we have been able to gather some important information about Thanos’ extremely ruthless and danger lieutenants. Marvel officially revealed statues of the Black Order at D23 this past summer and described them as “Children of Thanos.” Many have speculated they are much like Gamora and Nebula. They were kidnapped at a young age and raised to serve Thanos.

Proxima Midnight, from what we’ve seen in her spear-throwing scene, may keep her role as a combatant. She’ll probably show her combat abilities against Captain America. The most we’ll probably see is her trying to fight an enraged Hulk. Yet we’ve seen what superior combat prowess can do against the Hulk in the 2008 iteration of the character. A very human Emil Blonksy, played by Tim Roth, held his own against the raging green monster. If the Hulk is having a hard time with a human with high combat skills, it’s unlikely he will be able to tango with Proxima Midnight.

Corvus Glaive isn’t fully revealed in the trailer. We believe he is the one extracting the Mind Stone from Vision as Proxima Midnight stands by his side. His role will probably be more in line with the comics, as a General of Thanos’ Outrider armies, strategist, and leader of Thanos’ elite group. The movie will probably keep his superhuman strength and durability, and may even keep his immortality as a huge surprise when one of Earth’s heroes thinks they’ve killed him. Yet in the promotional sculpture for the movie, he does have his blade, kept closer to his side than Proxima Midnight does hers.

Ebony Maw carries no weapon in the promotional sculpture reveal for the movie. The only speculation we can draw from the trailers is supposedly he was the one stepping over the bodies in the one clip before Loki offers up the Tesseract. It leads me to believe that Ebony Maw convinced the members of that world that their demise was a viable option. The same goes for Loki- that Maw convinces him that giving up the Tesseract is the best option.

We won’t be seeing Supergiant in the movie. So, it’s possible Ebony Maw will have a combination of Supergiant’s powers and some persuasion skills faithful to the comics. I suspect he will use persuasion and logic to make some characters advance his own goals. However, I suspect he will be using some mind control to get the job done. The first might be like the comic book, and there might be a few scenes to reflect this. However, I believe the mind control will come in to play to keep dialogue down. Because, we want more action scenes.

The only thing we’ve seen is the actor playing Ebony Maw, Tom Vaughan-Lawlor, menacingly crouched over Doctor Strange on set in full motion-capture gear. And he’s reaching for the Eye of Agamotto (The Time Stone). Ebony Maw will more than likely, personally try to extract the Stone from the mystical item. It might also mean his mind control/persuasion of Strange has failed. And now Ebony Maw has resorted to means other than words to get what he wants.

The character called Cull Obsidian looks to be the hulking figure likened to Black Dwarf. It looks like the MCU made a conscious decision to change the name. This was probably an attempt to keep away from any controversial names, but still keep the physical characteristics from the comic book character. Interestingly enough, the name they chose also happens to be another name for the Black Order in the comics. We have yet to see this character or supposedly any part of this character in the latest trailer. Marvel hasn’t commented on whether his plot will follow the story line from the comic book. Yet we see both Hulk and Black Panther are in Wakanda for the big war. We may get to see a Hulk vs. Abomination style fight between the two. However we may also get to see a comic-book faithful defeat by Black Panther. 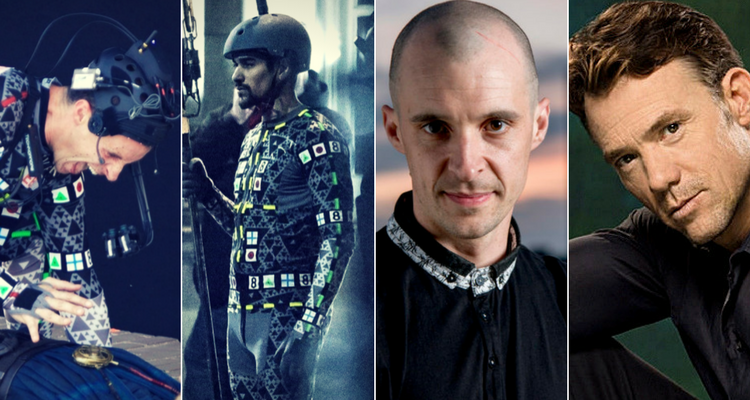 Tom Vaughan-Lawlor will be playing Ebony Maw in the film. Terry Notary will be Cull Obsidian and Teen Groot (probably motion capture). They have yet to reveal the actors for Corvus Glaive and Proxima Midnight.

Love/Hate star Vaughan-Lawlor remains very tight-lipped about his role in the movie. He was only found out from the above-mentioned motion capture set picture.

Terry Notary is most notable for his motion capture work in Planet of the Apes and Kong: Skull Island. We have yet to see an interview with him describing his work on Avengers: Infinity War. Add to that, production shots from the movie are hard to find. As for anything regarding Corvus Glaive and Proxima Midnight, we haven’t seen anything online about who plays them. Kudos to Marvel for keeping the bulk of the movie under wraps. Maybe when the new year rolls around, we’ll get some more information. And perhaps we’ll get some new trailers for the film featuring more of these villains.

Surprises Yet to Come

Having speculated about these characters, the movie may take a completely different direction from what we’ve talked about.

Avengers: Infinity War will premiere May 4th, 2018. Ironically, it will also premiere on the weekend of Free Comic Book Day. The same day Infinity #1 came out in 2013, when the Black Order first appeared.