Loki’s intentions have always been suspect. However, Kevin Feige revealed Loki would side with Thanos in Avengers: Infinity War at Comic Con Experience in Brazil. And as we saw in the first Avengers: Infinity War trailer it looks like he’s offering up the Tesseract to the Mad Titan. There are some minor spoilers ahead for Thor: Ragnarok to help develop some of what we believe to be Loki’s true side in the movie.

While the Marvel Studios boss might tell us Loki is on team Thanos, it just doesn’t fit his character. Loki is not on Thanos’ side. He’s not even on Thor’s/the Avengers’ side. He’s on his own side. Whether it means giving up his brother to the forces of evil or aligning with his brother to avert a catastrophe, he will always choose the side that best benefits him. Even when he has the chance to fight alongside his brother in Thor: Ragnarok he is secretly intending to turn his brother in. This is mostly because he wants to get back to an easy life. Luckily, Thor sees through this and incapacitates Loki before he enacts his plan.

Back to the First Avengers

In the first film, we see Loki using the Mind Stone on Hawkeye and later (unsuccessfully) on Tony Stark. The scepter with the stone embedded into it was entrusted to Loki by The Other, a being who speaks for Thanos to fulfill his will. His words to Loki are chilling, as he states:

If you fail, if the Tesseract is kept from us, there will be no realm no barren moon, no crevice where we cannot find you. You think you know pain? He will make you long for something as sweet as pain.

It’s important to note that Loki was king in Asgard, posing as Odin for a very long time before being found out by Thor. He had the Tesseract in his possession as a trophy, along with the Eternal Flame and the fake Infinity Guantlet. Yet he did not offer up the Tesseract as promised. However, in the first Avengers: Infinity War trailer we see him bending down and offering it up.

There’s a theory that Loki might herald the arrival of Thanos. That theory doesn’t really hold water if you examine The Other’s dire warning to Loki in The Avengers. I am lead to believe Loki didn’t summon the Mad Titan. His lifestyle as fake-king is over, but he’ll probably want a back up plan. The Tesseract was something Thanos needs to open up other realms for conquest. And the thought in Loki’s mind is simple: Why not use the stone for himself?

It all comes to that key moment in Thor: Ragnarok where he pauses at the sight of the Tesseract. I believe he takes the Space Stone with plans to use it when the time is right. However, Thanos is actively hunting Loki after his failure to get the Tesseract in the first movie. It’s been a few movies, but the Mad Titan has finally cornered him. Now Loki is in trouble.

And what’s the best way to get out of trouble? Offer up the thing they were looking for. The thing you planned on using for yourself. He doesn’t get any realms by doing this, but he does stay alive. 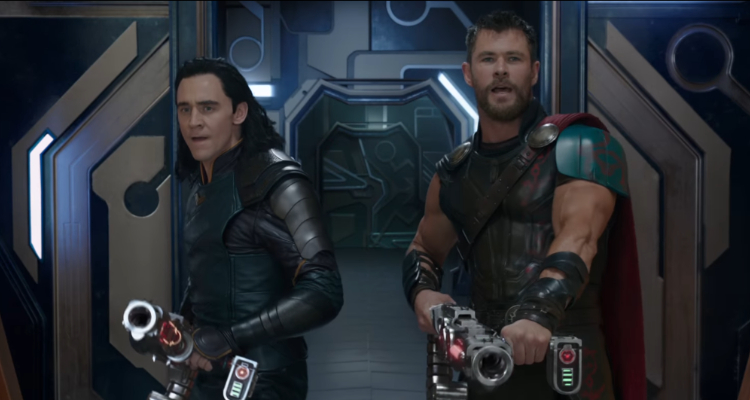 Always the Most Comfortable Way Out

Loki is about living an easy lifestyle. He will use trickery, deception, lies, etc. to ensure that he has that lifestyle. His ambition to rule led him to assume the throne in the form of Odin, and his ambition led him to lead the Chitauri forces to Earth in an attempt to conquer it. When both of these attempts failed, he took other routes.

More recently in Thor: Ragnarok, his decision to work to help stop Hela wasn’t so much a solid decision to do good for the people of Asgard, ut was his self-preservation kicking in. He realizes he is on the wrong side of the battle. He felt the pains of loss before, so to avoid it again, he works with the winning side. In the end, he escapes the destruction of Asgard with Thor and the rest.

With all that said, I believe Loki won’t be all gung-ho on working with Thanos. He wasn’t even that interested in the Mad Titan’s involvement in the first Avengers film. Him working with the purple guy on the chair was just a means to an end. And I believe that even in Avengers: Infinity War, the offer to work with Thanos is just his self-preservation kicking in. He is more a slave to the will of Thanos, like most other realms subjugated to his rule.

There are some theories also circulating that Loki might have a redemption in this movie by sacrificing himself against Thanos’ forces. I don’t think this is the case. It doesn’t fit his character. The only way this could work is if he was making the enemy/ally think he was dead. This would only be because the only viable option left for him is to fake his death (yet again).

Whatever plays out for Loki in this next film, we’ll be there to see it. Let us know your thoughts below! Avengers: Infinity War hits theaters on May 4, 2018.