Maz Kanata spoke those words to Rey in Star Wars: The Force Awakens. Rey’s answer is a simple one that assumes she’s essentially nothing. An unimportant stranger lost in an amazingly grand story. Well, that’s true. But her surname doesn’t have anything to do with it. She’s the protagonist of this story because the world dictated it. Whether or not she is a Skywalker is almost irrelevant to her story. Almost.

Rey’s parentage was the most talked about aspect of Star Wars: The Force Awakens. Would Rey be confronting her father when she sees Luke at the end of the film? Or did Rey witness her father, Han, die at the hands of her brother Ben? Those were just two popular theries.

They are questions that fans have wanted answered for two years now. But whatever the answer may be it won’t take away the power of those moments in the J.J. Abrams-directed epic. The answer won’t make Han’s death painless; it won’t make the ending any less hair-raising. Rian Johnson, Daisy Ridley and the people of Lucasfilm and Disney set out to give a satisfying background to the new star of Star Wars..

Rey’s answer to Maz’s question and a hint for what would be revealed in Star Wars: The Last Jedi.

In The Last Jedi, Rey notices a place calling out to her on Luke’s island. It’s a hold with deep, dark roots growing out of it. But more than that, it represents a dark place to her. This is not the cave in Dagobah. Luke knew of the place Rey mentioned, but it didn’t stand out to him as a haven for the dark side. It wasn’t a place of which she needed to be warned. But something still called out to her, and she opened herself up to it. That’s the moment Luke fears in the trailer. To which he said, “I’ve seen this raw strength only once before…”

But Rey goes to this dark place. There she finds a mirror-like wall resembling obsidian. Rey asks the wall who her parents are. Her answer? Well, her. Rey appears in the reflection, which leads to another vision. She falls into a vision that leads to a hall of infinite Rey’s. They mimic her movement, but slower and slower.

The first clue the film offers. A more definitive answer comes from the most unlikely of sources. 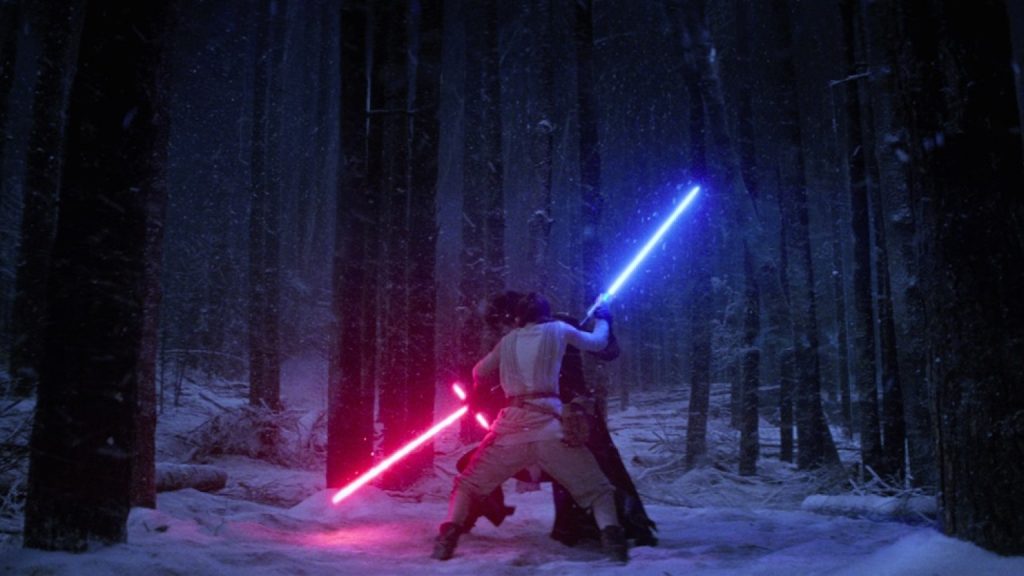 Kylo Ren and Rey share a strong connection. They actually have several conversations throughout the film by way of the Force. They discuss each other; try to turn each other. At first it seems like it could be corny but it ends up being one of the most emotional parts of the film. Even if it’s just two characters talking to one another from far, far away.

At one point Kylo Ren is trying to turn Rey in their connection. To do so he brings up her parents, becoming her to reveal the truth to herself. The truth she’s always known.

Her parents were nothing more than Jakku junkers who sold her for some petty cash. They died trying to get off the planet and are buried in an unmarked grave somewhere on the desert planet. That is all.

The expression on Rey’s face is the same one she had when Maz told her they weren’t coming back. Her parents don’t matter. But that does not mean she doesn’t matter. Rey is the protagonist of this story. She is the new Jedi. She would not be turned to the Dark Side. The galaxy’s brand new warrior would stand in the light.

Rey truly is a no one. But that’s the message of this new Star Wars world. That anyone can be of importance. Jedi will once again take their place spreading good will across the universe. That’s what The Last Jedi is about. Just because you are the last of something doesn’t mean you always will be.

It doesn’t take a Skywalker to save the universe. Anyone can do it. Even no one.