Porgs were front and center in the marketing campaign for Star Wars: The Last Jedi. They were seated right next to Chewbacca aboard the Falcon; they covered Luke’s island. Many people assumed that Disney forced writer and director Rian Johnson to include a new creature. A “cute” creature the company could market the hell out of. Well, they did market the hell out of it. But as it turns out, Disney had nothing to do with the porgs.

StarWars.Com recently released an interview with The Last Jedi’s Creature Designer Jake Lunt Davies. In it, Davies revealed that Johnson created the porgs after realizing he had a peculiar problem.

From what I gathered, Rian had gone to shoot this sequence on Skellig Michael, which is the real island location that stands in for Ahch-To, and that island is covered in puffins. It’s a wildlife preserve and everywhere you look there are hundreds of birds dotted around the landscape. From what I gathered, Rian, in a positive spin on this, was looking at how can he work with this. You can’t remove them. You physically can’t get rid of them. And digitally removing them is an issue and a lot of work, so let’s just roll with it, play with it. And so I think he thought, “Well, that’s great, let’s have our own indigenous species.” We’d already started work on the Caretakers, which again was a brief from Rian. We’d just been told “puffin people.”

Star Wars: The Last Jedi was a polarizing film, but that reveal may be one of the film’s biggest surprises yet. Everyone assumed the porgs were Disney’s intervention. Not the case.

Just Along for the Ride

Without revealing too much, the porgs aren’t important to the plot of Star Wars: The Last Jedi. It’s unclear if audiences or filmmakers will ever return to the planet of Ahch-To. Fans may never get to glimpse the hilarious and underutilized Caretakers. But the porgs. Well, the porgs managed to wedge their way onto the Falcon. Into every single nook and cranny. The delightful creatures do make a rather annoying noise. But they were an otherwise funny addition to the film.

They didn’t impede the overall story; they are not the parts of the film many fans are complaining about.

At first, the porgs seemed to resemble a creature from a completely different franchise. But one that Disney is very much involved in. Considering his appreciation of Japanese culture it was a surprise that Johnson’s creatures  didn’t resemble the small, cute loveables from one of the best films ever made… 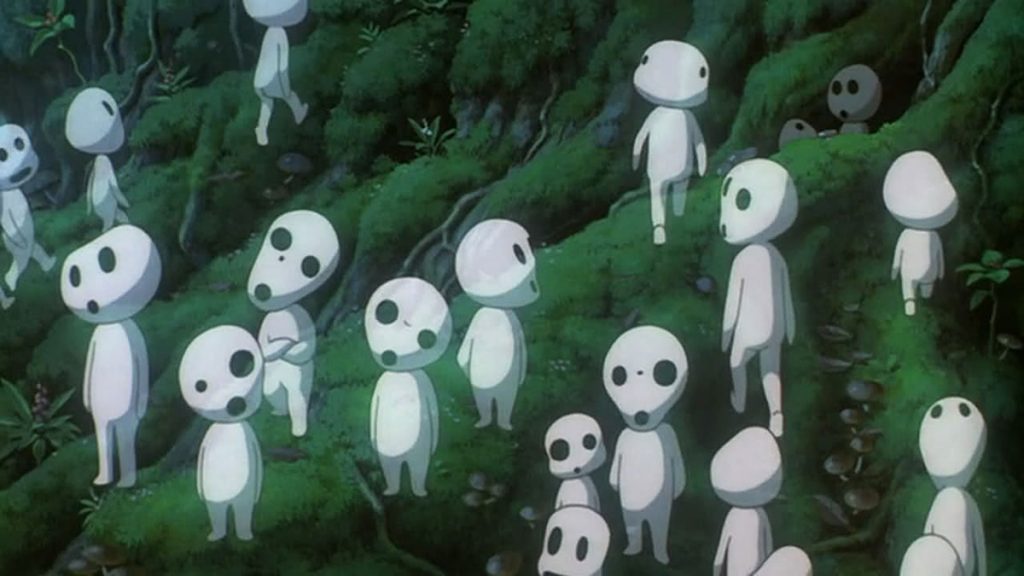 Kodamas populate the forests of Japan in Hiyao Miyazaki’s film, Princess Mononoke. The film is one of the best ever made, live-action or animated; Miyazaki is one of the best writers and directors ever. Every film of his is a classic worthy of study and deconstruction. Fans will argue for years whether or not his magnum opus is Princess Mononoke or Spirited Away. But it’s a lively discussion, one in which all fans realize that no matter who wins everyone loves what this amazing artist has given the world.

What possible lessons could Rian Johnson have learned from these lovely creatures?

The Kodama are a mythical legend in Japan. Have you ever been in a forest and heard a random branch breaking, or a soft sound in the distance? No, it wasn’t an echo, it wasn’t a bird. It was a Kodama! But they aren’t creepy, despite being one of the creepiest looking things around. Like the porgs they take some getting used to. But as the main character of that film, Ashitaka, says the Kodamas are nothing but a good omen. Good luck. More importantly they represent a peace in the forest. An ever-present representation of the Forest Spirit. When the forest suffers a major loss near the end of the film, it’s the kodama’s return that serves as the final sign that all life will return.

The Dark Side and the Light

Life and death; love and hate. Those themes are just as much at the center of Princess Mononoke as they are in Star Wars. The source of the Jedi and their original intent may still be an important part of the Star Wars story. But the porgs and caretakers could have played into that more. They could have represented the peace on the island that humans, Rey and Luke, upset. The creatures could even represent the Force, a natural beautiful energy that can sometimes be manipulated for the forces of good and bad.

But the creatures themselves are not good or bad. They simply are. Like the Force.

There appeared to be many lessons that Ahch-To can teach Rey and the Star Wars Universe. Like many of the interesting elements that appear in the corners on every one of these films it may remain unknown. A living and breathing part of a relatively small world in a galaxy far, far away.