“You’re giving them their costumes, makeup kits…expecting what?”

Geoff Johns and Gary Frank are trying their best to create a phenomenal comic to please those both excited about and hesitant of Doomsday Clock #2. At first, the story was playing out as a rather successful sequel to Watchmen. Rorschach made a surprising return; Ozymandias is plotting away once again. The politics of the modern world act as a pseudo backdrop to the story. It’s all reminiscent of the original comic’s intent.

But there are some deeper revelations at play.

Instead this is more accurately a sequel to DC Universe: Rebirth #1. Johns and Frank’s previous collaboration completely reset the entire DC Universe. It was also a fantastic success and kick-off to DC’s entire Rebirth relaunch. But eventually questions from the issue needed to be answered. There’s more story to be told. The inner-workings of DC have been tampered with. Someone has altered the course of time and space. An unlikely band of heroes and villains have banded together to find him.

The man they’re looking for is the most powerful superhero ever created. Capable of changing the very fabric of the galaxy; the very panels of the comic book. The hero needed to save the world is also more than capable of destroying it. As the story of Doomsday Clock unfolds, Johns reveals the pages of yet another masterpiece awaiting its place in comic history.

Men and women argue and fight as the world falls and crumbles around them. The setting and tone Johns captures perfectly mirrors that of the original stories. This is comic maturity at its best. Not because of the language; not because of the gore. But because the themes at play challenge what it means to be reading a few sheets of paper. To imply that the metahumans contained within are powerful enough to affect our world. Or more importantly, the reader’s perception of the characters.

When it comes to comic books, what more can you ask for? The plot of the comic is simple. This isn’t the slow-burn of Alan Moore’s original. A grand mystery is the central plot but it’s one without a clear twist or direction. The impending doom Geoff Johns has created is in a mysterious fog. The Doomsday Clock that counts down is unknown to the reader, but the tension is tangible nevertheless.

Unfortunately, sequels have occasion to borrow too much from their original source. Doomsday Clock #2 is guilty of that. The shadow of Moore’s original cast of characters looms over this entire series. Because of that, Johns has seen fit to bring more than a few of them along for the ride.

Some recent additions aren’t as necessary as Rorschach’s resurrection and somewhat hurt the story.

“This city is called Gotham.”

Gary Frank might have the toughest job in comics this year. To follow up the work of Dave Gibbons is one thing. To then be responsible for blending that world with the DC Universe everyone is familiar with is quite a task. But Frank succeeds in a fantastic way. He doesn’t embellish the extraordinary characters created by Johns.

Like the original work the costumes are simple and effective. All of the character designs are perfect. Capturing the essence of the depraved, insane or brilliant minds within them.

The action is also top-notch. Explosions seem to be a particular skill of Frank and colorist Brad Anderson. Any use of fire is a wonderful mix of complex edges and gorgeous shading. The destructive force in the pages of Doomsday Clock #2 licks and vignettes several pages throughout the issue. Man’s violent nature and being on the brink of violence has been a major theme in the Watchmen world. Luckily, here it’s perfectly captured by the veteran art-team. 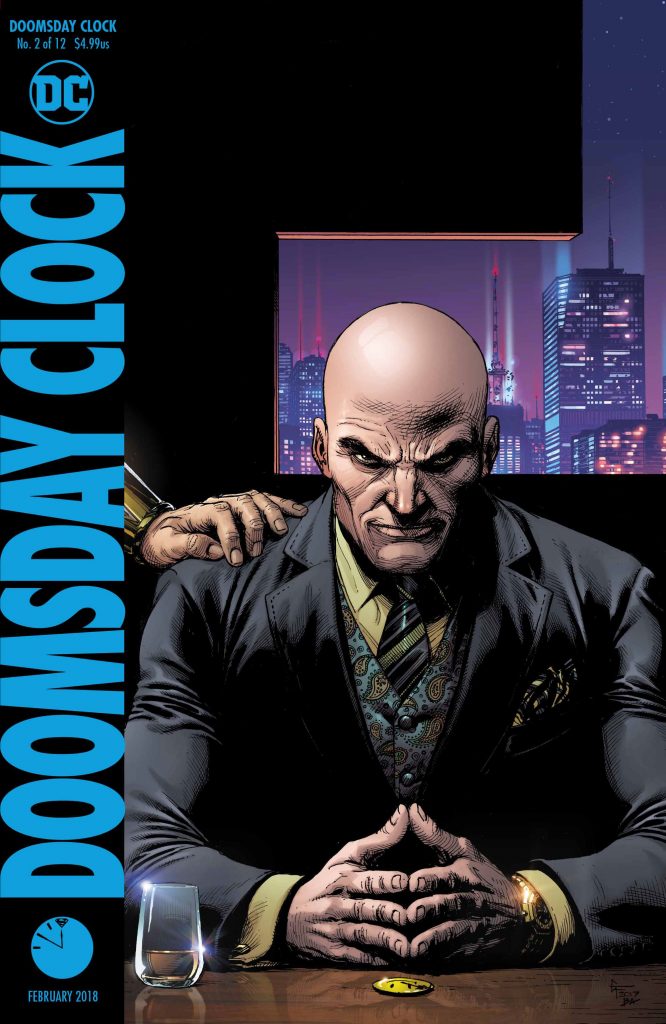 The promise of power is tempting. But what if a character already has some? Greed is contagious. But more importantly, it can lie dormant. A character can appear to be good, or changed for the good, only to change for the promise of something more. Lex Luthor’s presence in this issue is the best amalgam of the two DC worlds so far. An extension of the promise Doomsday Clock hopes to deliver: a place in DC for the Watchmen.

Geoff Johns and Gary Frank are two of the best choices for this story. Johns has been planning this for years, that much is obvious. But Frank’s work feels as if he has as well. That the two artists have been showing these characters to each other for years. Sharing ideas about how they might play into each other. What it could mean for the Justice League to meet the Watchmen. The significance that would have to the story and the entirety of the comic world.

All of those elements seemed to be in Johns’ mind as he was crafting this story. There is no one who loves these characters more. He has a remarkable talent for telling uniquely classical stories that make clever, innovative use of their starring characters. Doomsday Clock looks to epitomize that skill. Many readers never expected, or wanted, these worlds to meet. But Geoff Johns did. And in his hands the meeting of these comic legends is a must-read comic.