Beware of spoilers to Wonder Woman #37, ye who enter here

Darkseid is back, baby! DC’s big bad has been out of commission for a while now. After his “death” at the hands of the Anti-Monitor in Justice League: Darkseid War, the massive monstrosity has been nothing more than an infant. A child. But recently in the pages of Wonder Woman, James Robinson has given the New God a bit of a booster. Darkseid has been hunting down and siphoning power from the children of Zeus. Well, as revealed in the final pages of Wonder Woman #36, Zeus noticed.

Diana’s father had a fantastic showdown with the young Darkseid in Robinson’s most recent entry into his Wonder Woman run. It has powerful magic, explosive action, and fantastic art-work. But the more interesting part of the entire issue was the underlying threat behind Darkseid’s intent. Well, the first clue was that he hasn’t fully reformed yet. By siphoning off power from Zeus’s children Darkseid has been able to return to the form of a young adult.

So what would be the best power source for the New God to use to reform completely?

Why an Old God, of course! The father of those characters he’s been robbing of power. It seemed like Zeus’s return would save the day. That Diana would see her long-lost Father triumph in the face of the most evil force in the Universe.

Instead, her father fell to that force. His death fed that force. And now, Darkseid has returned. 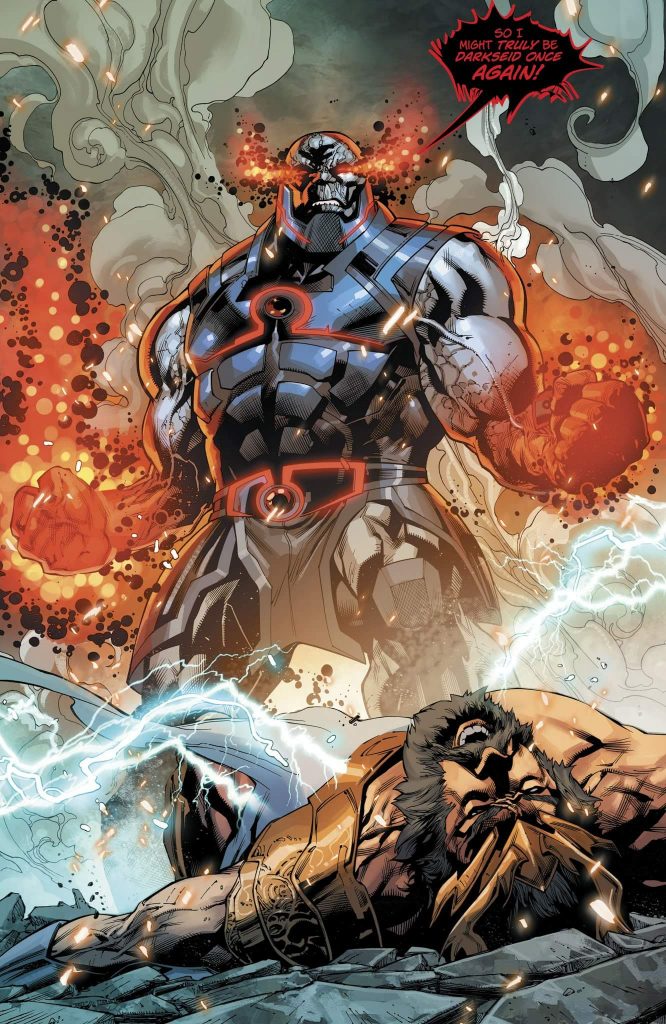 Darkseid returning in the final pages of Wonder Woman #37.

The death of Diana’s father is hardly tragic. He hasn’t exactly been around much. Instead, it provided for a glorious fight that brought about the return of the most important villain DC Comics has. Darkseid might not be that important to the film Universe at the moment, but he’ll always be a fan-favorite comic villain. Jason Fabok did an amazing job of realizing the character for Geoff Johns in Darkseid War.

Carlo Pagulayan and Jason Paz also give Darkseid a wonderful new look with the help of writer James Robinson. Robinson’s run has been interesting so far, but this is the most important development to say the least. The consequences Darkseid’s return will have for the ENTIRE DC Universe is immeasurable. He’s certainly a heavyweight, power-wise. To see him wreak havoc across multiple titles and characters would be objectively awesome. Sure, no one ever wants to see their favorite superhero have a bad day.

But a big showdown with one of DC’s best villains? Always a welcome sight.

In fact, quite a few titles have been building to something special. DC Universe: Rebirth #1 revealed someone has been messing with the Multiverse. Chances are, it’s Dr. Manhattan. There’s even an entire story about it. Written by comic greats Geoff Johns and Gary Frank.

The title, Doomsday Clock, has had some major reveals lately. Some of the story elements are incredibly difficult to handle. But with one of the best writers in the business on the title, it’s been a great read so far.

Whether it’s Darkseid or Dr. Manhattan’s presence that’s upsetting the Multiverse is unclear. But what is clear is that DC is building to something.

A crazy happening on a similar scale to their previous Universe-destroying, world-shattering events.