“Some people break their patterns. Some don’t.”

Wow. Batman #38 is something else. Bruce Wayne is a topic often synonymous with Batman. They happen to be the same person. But recently, Tom King has been hinting at the creation of a villain who’s also named Bruce. It was more than a little confusing; more than a little surprising. But the issue is one of the darkest stories Tom King has told. Bruce Wayne does some good old fashioned detective work in this issue. There are gruesome murders befalling Gotham.

Like any good story, there’s much to dissect. The murders appear to be the work of Batman’s usual suspects. Another madman with another crazy background. But there’s much more to it than that. What Batman #38 becomes is the origin for yet another crazed villain. An obsession begins here. One that mirrors the life of Bruce in more ways than one. How can a man stand so tall after suffering so much? It’s a question that Bruce must ask himself from time to time. It’s also a question that serves as the foundation of another villain. 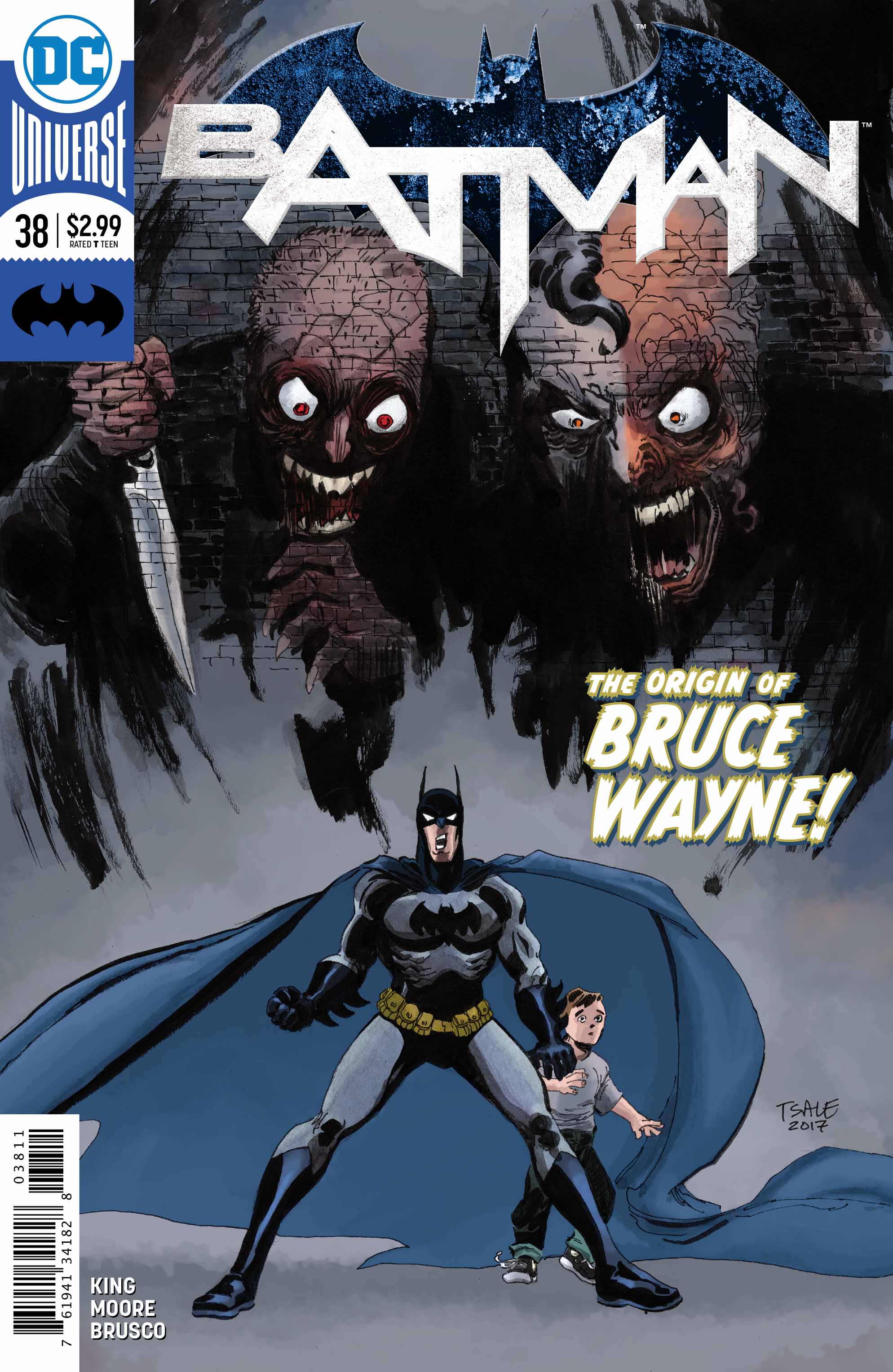 King’s creation is a gruesome look at just what lengths some people will go to to resemble their heroes. Recreating the traits that make them so special. By recreating the tragedies that define them. It’s a brand new story that is almost too shocking for the pages of Batman. But considering how much fun King’s last arc was, he can afford to go dark for a while.

There’s quite a bit of misdirection going on in the pages of Batman #38. The plot is thick with suspects and victims alike. The premise is simple and twofold: a boy, who’s father was on the Wayne board of directors, has lost both his parents to murder. The suspect? One of Batman’s worst villains, Zsasz. As Batman follows the trail of murders, suspecting a copycat killer, Bruce Wayne tries to comfort the boys who’s seemingly lost it all. It’s touching, and reminiscent of some of King’s existing work.

The use of parallel comic panels to tell the story is something Batman readers are probably getting used to. In fact, it was used literally in the last arc. But does that make it a cliche or a style? The real answer is: who cares? This story is fantastic. The drama is real; the tension is tangible. If a reader thought King’s previous outings were too lighthearted, they’ll find one of the darkest stories to star the character in years. It takes the Bruce Wayne mythology and turns it on its head. Revealing a hideous truth behind the creation of Batman.

The need for tragedy.

Travis Moore does a fantastic job on this issue. Moore’s work has an almost Francis Manapul-like look to the lines. Batman’s cowl has never looked better as he travels throughout the whole of Gotham City. Giulia Brusco gives Jordie Bellaire a much needed break by taking over in the color-department. And with good reason. Brusco’s work gives a painted look to every one of Moore’s panels. It’s a classic touch to an already classic look.

King’s had some of the best artists in the business as collaborators over the last couple of years. And with good reason. His work is exciting and new, with a no-fear approach at changing the status quo of the somewhat ancient streets of Gotham. King, and some legendary artists, are making legends in the pages of Batman.

Tom King has stated he intends to stay on Batman for 100 issues. If it were any other writer that might seem like too long of a run. But with King it doesn’t seem like enough. Every one of his arcs feels like a completely different story. Yes, there are similar styles to his storytelling. He repeats significant phrases, uses parallel panels to mirror characters, and often relies on the 9-panel page for entire stories. But that’s the beauty behind his style.

With each story his technique manages to feel fresh and unique. He’s created characters; he’s reinvented old ones. He hasn’t been afraid to get weird. In fact, he’s thrown almost everything in the book at Bruce and the Batfamily. With the help of Travis Moore, Tom King makes another significant creation by bridging it with the old. Taking the world that Bruce endured and blending it with the world he’s manifested for himself.

King’s reign seems to be both lovely and exhausting for Bruce. But it’s nothing short of comic perfection for readers.