One of the better comics of last year from Marvel Comics was Jeff Lemire and Mike Deodato’s run on Thanos. The story saw a weakened and dying Thanos struggle to return to his former glory with agents from the Shi’ar Empire and his own son Thane, empowered by the Phoenix Force, set against him.

With Thanos returned to his former glory, writer Donny Cates and artist Geoff Shaw took over the book. In Thanos #13, they introduced a cosmic Ghost Rider who fetches Thanos and brings him millions of years into the future to meet with his much older self.

It’s a future where Thanos has won. He has defeated every single superhero and cosmic threat in the Marvel Universe. He even sits upon a throne in a room full of dead Celestials.

Well the story picks up again in Thanos #14, where the older Thanos must beg his younger self to help him. In order to gain his younger self’s loyalty he reveals his true birth name.

It’s a name his mother revealed to Thanos before “her mind had been shattered.” Before the Mad Titan killed his mother.

She named him Dione. 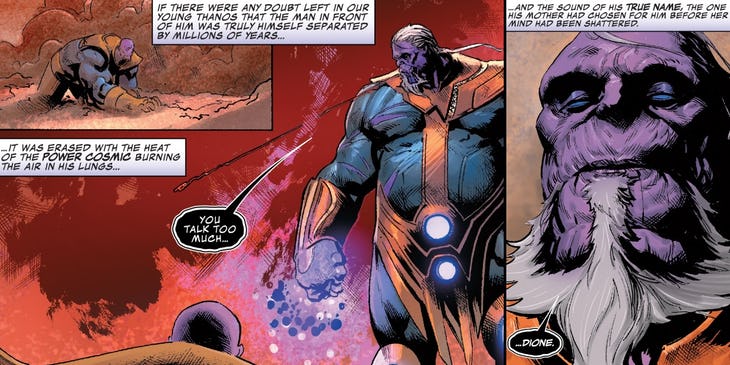 The name is significant. It is the name of one of Saturn’s moons. Thanos was birthed on the moon Titan which also revolves around Saturn. However, the name is also translated from Greek to mean Goddess.

What the elder Thanos wants with his younger self is still a mystery, but it has to do with the one lover Thanos held dear, Lady Death.

It’s an interesting twist given that in Lemire’s run, Lady Death is who weakens Thanos and is causing him to die. However, she reveals it was her plan all along to have Thanos return to his former glory. Her plan might have backfired because once Thanos is back, he reveals he has no use for Lady Death any more. 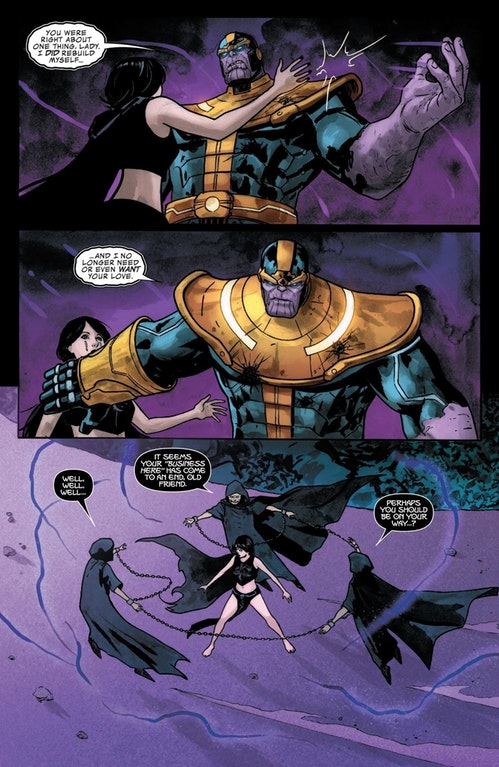 Obviously things have changed in the future and the elder Thanos does have a use for Lady Death, but what that use is, we won’t find out until Thanos #15 due out next month from Marvel Comics.