Actor James Franco just won the Golden Globe for Best Actor in a musical/comedy for his performance in The Disaster Artist. It was also recently revealed the actor is working on a Multiple Man project with 20th Century Fox.

However, after winning the Golden Globe at least five women have accused the actor of sexual misconduct. Actress Violet Paley, who had an uncredited role in the Beach Boys film Love & Mercy explicitly accused Franco of coercing her into performing a sex act. Paley was engaged in a consensual sexual relationship with Franco at the time, and after the alleged sex act occurred the two advanced their relationship.

Breakfast Club’s Ally Sheedy also hinted that James Franco drove her out of the film/TV business. In another deleted Tweet she also referenced Christian Slater. 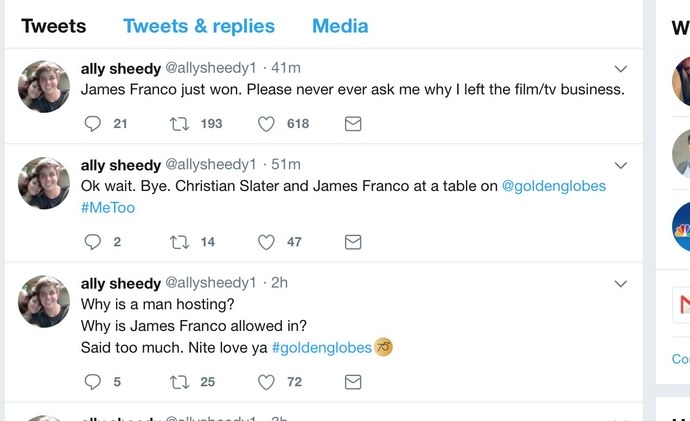 Actress Sarah Tither-Kaplan who starred in The Long Home as well as the TV series Making a Scene with James Franco called out the actor for hypocrisy. Tither-Kaplan also attended the film school, Studio 4, that Franco founded. In a Tweet she said, “Hey James Franco, nice #timesup pin at the #GoldenGlobes , remember a few weeks ago when you told me the full nudity you had me do in two of your movies for $100/day wasn’t exploitative because I signed a contract to do it? Times up on that!”

Hey James Franco, nice #timesup pin at the #GoldenGlobes , remember a few weeks ago when you told me the full nudity you had me do in two of your movies for $100/day wasn't exploitative because I signed a contract to do it? Times up on that!

Tither-Kaplan would join four other women including Violet Paley to accuse Franco in an LA Times exposé. She told them, “I feel there was an abuse of power, and there was a culture of exploiting non-celebrity women, and a culture of women being replaceable.”

She would go on to recount her role in Franco’s The Long Home. She said there was a “bonus scene” filmed for the movie which included a raunchy sex act. She says Franco asked the women to remove their plastic guards as he simulated a sex against on them. She then says Franco had the women dance around him wearing animal skulls on their heads. One woman who balked at the scene was removed from the film the next day.

“I got it in my head pretty quickly that, OK, you don’t say ‘no’ to this guy,” said Tither-Kaplan.

The LA Times report another woman who performed in The Long Home confirmed the bonus scene and the removal of the plastic guards.

However, Franco’s attorney Michael Plonsker denies their story. He says “the allegations about the protective guards are not accurate.” He also said that Tither-Kaplan had numerous social media posts indicating a positive experience on the set of the film.

Cynthia Huffman who was the casting director on The Long Home also wrote a statement that “she personally checked on all the actresses constantly to make sure they were ok and comfortable. James is all about giving up and comers, actors and actresses and young filmmakers a break in this business. I feel horrible that anyone was made to feel uncomfortable but we went to great lengths to make sure all the actresses in the nude scenes felt comfortable and safe.”

Tither-Kaplan did say that Franco apologized to her about his behavior on the set. “I want to give him credit for at least being open to communicating with me. I felt that he was still not really taking accountability for the environment on the sets.”

Hilary Dusome, who also attended Franco’s Studio 4, described an uncomfortable exchange with Franco when he chose her to be in one of his “art films.”

I felt like I was selected for something based on my hard work and my merit, and when I realized it was because I have nice [breasts], it was pretty clear that was not the case. I don’t think he started teaching with bad intentions, but he went down a bad path and damaged a lot of people in the process.

Franco had asked Dusome and a number of other women to take their shirts off while shooting a scene at a strip club.

Natalie Chmiel was on the same set as Dusome and recalled that after Franco asked them to remove their shirts and no one volunteered he was “visibly angry.” She also said, “He just took advantage of our eagerness to work and be a part of something bigger. We were all these up-and-coming actors who were so hopeful.”

Franco’s attorney denies the claims by both Dusome and Chmiel.

Another student at Francos’s Studio 4, Katie Ryan, recounted Franco “would always make everybody think there were possible roles on the table if we were to perform sexual acts or take off our shirts.” She also said she received multiple email requests to audition for roles as a “prostitute or a hooker.”

Franco’s attorney also denied Ryan’s claim saying he’s “not aware that any of the actions alleged by Ms. Ryan ever occurred.”

Franco addressed the accusations on The Late Show with Stephen Colbert.

First of all, I have no idea what I did to Ally Sheedy. I directed her in a play Off Broadway, I had nothing but a great time with her, total respect for her. I have no idea why she was upset. She took the Tweet down. I don’t know.

He continued, “The others, look, in my life I pride myself on taking responsibility for things that I have done. I have to do that to maintain my well-being. I do it whenever I know that there is something wrong or needs to be changed, I make it a point to do it.

“The things that I heard that were on Twitter are not accurate, but I completely support people coming out and being able to have a voice because they didn’t have a voice for so long. I don’t want to shut them down in any way. I think it’s a good thing and I support it,” Franco added.

He then said, “If there’s restitution to be made, I will make it. If I’ve done something wrong I will fix it. I have to. I mean, I think that’s how that works. I don’t what else – I don’t know what else to do.”

He continued, “I mean as far as the bigger issues, you know, how we do it. Look, I really don’t have the answers. And I think the point of this whole thing is that we listen. There were, you know, incredible people talking that night. They had a lot to say, and I’m here to listen and learn and change my perspective where it’s off. And I’m completely willing and want to.”