Trump supporter and former Hercules and Andromeda actor Kevin Sorbo has been denied a spot at East Coast Comicon. The real kicker is the reason why Sorbo was denied.

According to Cliff Galbraith of Crucial Entertainment who organizes the Comicon, he turned down Kevin Sorbo because “he’s pals with Sean Hannity. I just can’t do it.”

**Update: Cliff Galbraith took down his Facebook post. Fortunately, we grabbed a screenshot so you can still it.** 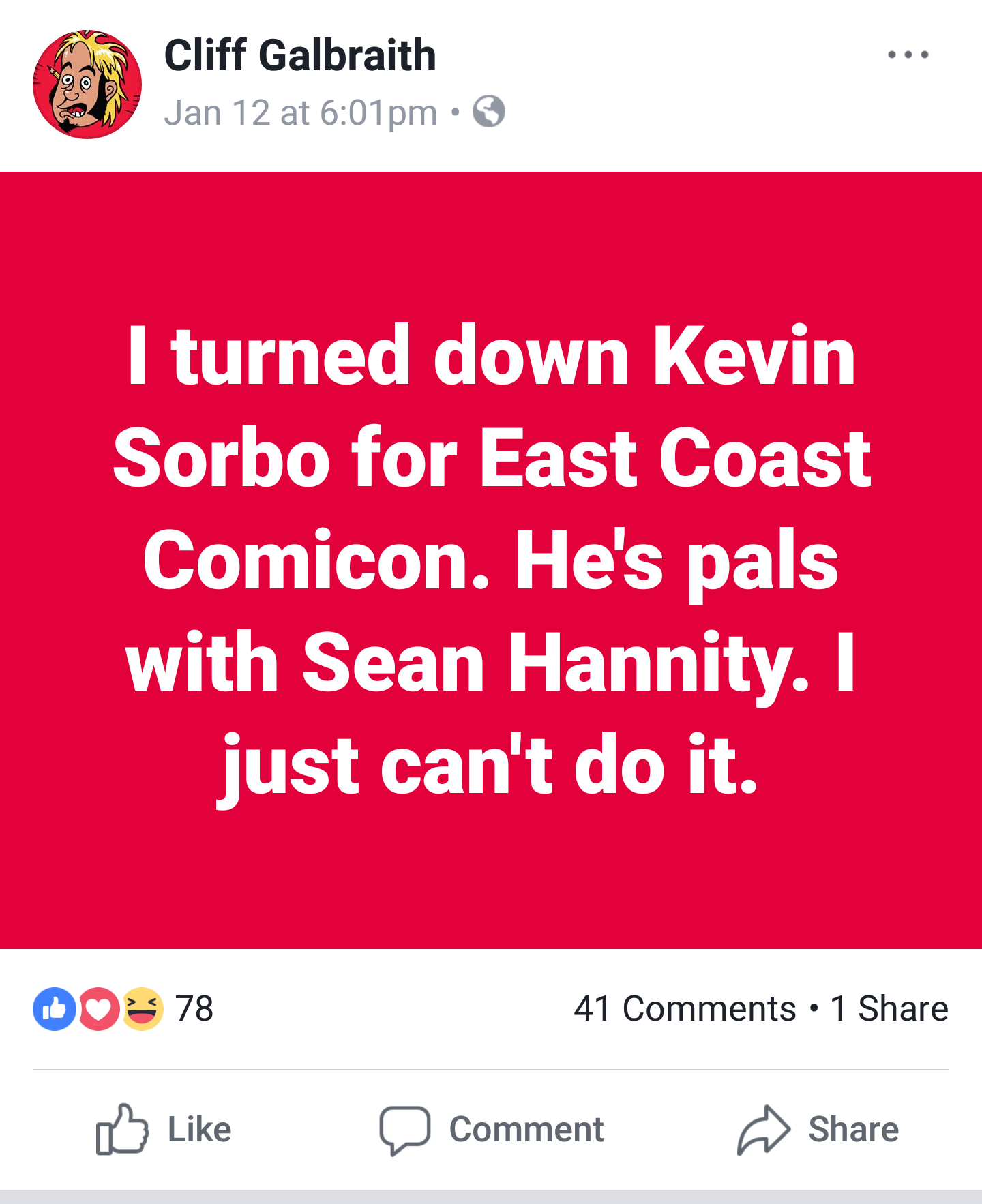 East Coast Comicon takes place from April 27 to April 29 of this year at the Meadowlands Exposition Center in New Jersey.

The Comic Con has been able to bring in some top talent over the years. In 2016, guests included comic book legend Neal Adams as well as Simon Bisley, Billy Tucci, and others.

In 2017, they were able to sign Machete actor Danny Trejo as well as bring in top comic book talent such as Marvel Wolfman, George Perez, Denny O’Neil, Yanick Paquette, Fabian Nicieza, and others.

One YouTube user said he would be boycotting the East Coast Comicon after he attended it in 2017.

He explains the East Coast Comicon’s program uses “your typical leftist made up CNN terms: homophobia, misogyny, voter suppression, intolerance, racism, xenophobia, treasonous acts.” He continues to explain and show that the art was created by Cliff Galbraith, the organizer of the East Coast Comicon.

Which brings us back to Kevin Sorbo. It seems Cliff Galbraith is making his political positions and those of others part of his business. He is going out of his way to deny possible guests who are “friends with Sean Hannity” from attending the East Coast Comicon.

This isn’t the only time we’ve seen leftwing people go after people’s livelihood and careers because of their politics. Mozilla CEO Brendan Eich was forced out of his position just after 11 days on the job for his positions on California’s Proposition 8.

Maybe it’s time Cliff Galbraith and the East Coast Comicon need to learn the same lesson the NFL, Hollywood, and Marvel Comics are learning. Americans and especially pro-Trump conservative Americans will not spend their money on products and companies that constantly talk down to them and try to belittle and attack them at every turn.