Welcome to the DC Universe!

It’s been an exciting day for DC Comics. They premiered Damage, a new series from Robert Venditti and Tony S. Daniel. And quite a few developments are coming from Tom King in the pages of Batman #39. First, he presents a big challenge to Catwoman and Batman’s relationship. And being the “2 birds, 1 stone” kind of writer, he also introduces a new hero to the DC Universe, The Gentle Man.

Tom King gave fans their first glimpse of the hero back in December with this Instagram post.

Obviously, there isn’t much to go on. It’s a great piece of art by an amazing artist, but what does it say about the character? His armor looks like a mix of Viking or Greek culture, with horns not unlike Ares.

So just who is The Gentle Man? Well, he’s very comparable to “Heimdall” from the Marvel Universe. He stands at the portal between this realm and Gehenna. In several cultures, Gehenna is a place for the wicked. For demons. In the DC Universe the “endless hordes” are constantly battling their way through the portal. One man holds them back. The Gentle Man.

This is how we meet our latest hero. Because Wonder Woman and Batman once offered to give him a brief respite from his job. And…

He looks like one helluva fighter. And he would have to be. The area he protects removes all powers from meta-humans. So when Catwoman asks why Superman isn’t better suited for the job, the answer is obvious.

Vacation, All I Ever Wanted…

It takes the two of them to adequately do the job of The Gentle Man. The problem is the way time and space are warped on this middle-ground between Gehenna and Earth. 10 years pass in the time it takes Gentle Man to have one meal with Selina Kyle. 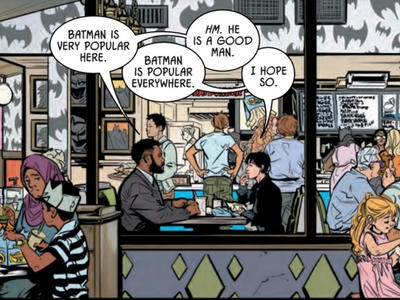 It would seem The Gentle Man failed to adequately articulate how time might affect Diana and Bruce. Leading to quite the cliff hanger for our 2 superheroes. But it becomes clear that the character doesn’t even comprehend how time works in the plane on which he protects our Universe. When Catwoman questions him about an apparent “wife” he has, he has no clue but expects it’s been around a year since he’s seen her.

The group expected The Gentle Man to have been in his position for thousands of years, not 1 year. Well, it’s technically true considering the way time passes. To him it would have been thousands of years. That’s right a year, feels like a thousands of years at the portal between Gehenna and Earth. King doesn’t have a scene between Wonder Woman, Batman, and The Gentle Man in this issue so they don’t get a chance to discuss the details. But since the horde is actually endless, there probably wasn’t that much time to talk about it.

Much like Atlas who holds the world aloft on his shoulders, The Gentle Man remains ever vigilant at his post. It’s unfortunate that he didn’t disclose to our heroes just how long they’d be facing the horde, but he won’t be the first hero to make a mistake.

Hopefully, readers get more chances to see The Gentle Man work his magic against the hordes he faces endlessly. He still remains a mystery, but he’s another exciting addition to the DC Universe made by the ever-inventive Tom King.