Beware of Spoilers to Batman #39, ye who enter here

Batman and Catwoman have been enjoying a rather breezy engagement. Writer Tom King has crafted a great relationship between the two characters. They’ve always enjoyed a “will they/won’t they” dynamic, but what they have now is love. For Bruce Wayne, The Batman, to be in love is a difficult thing. There’s a reason he hasn’t had a definitive romantic interest, until now. His story is tragic. For that reason not many writers have given him the gift of a semi-normal life.

But Tom King seems intent on doing that. And like any relationship there are obstacles. Bumps in the road. Trials and tribulations. Batman #39 introduces the first “obstacle.” Or does it?

The issue begins with a fellow superhero contacting Batman via the Bat-Signal. When he appears, the superhero reminds him that they once met a man. A…Gentle Man. This man serves as a Heimdall-like character. He guards a portal to this dimension from another. The doorway is constantly attacked because as the warrior puts it, “the hordes are everlasting.” So the guy could use a break. At one point Batman and the other superhero offered him one. And now he’d like to collect. So Batman dons some kick-ass armor, is hilariously ridiculed by his betrothed, and heads out to the great beyond.

As for the superhero he’s with… Well, she’s the obstacle he’ll have to overcome. Because it isn’t a matter of might, it’s a matter of mind. Because there’s another hero who fans have always liked seeing stand next to Batman. 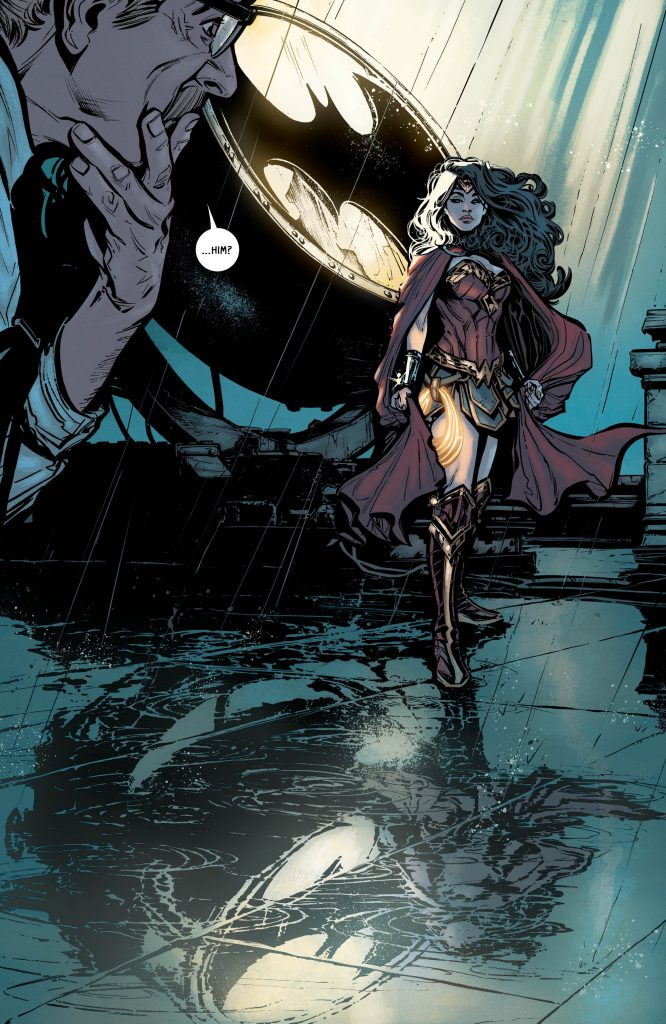 Wonder Woman and Batman face down these “everlasting hordes” together while the Gentle Man is escorted through the normal world by Catwoman.

Since Tom King is an incredibly clever writer, he can’t just have Wonder Woman call Bruce out of nowhere. He has to have a little bit of fun with it. So Diana decides to get Bruce’s attention the old fashioned way. 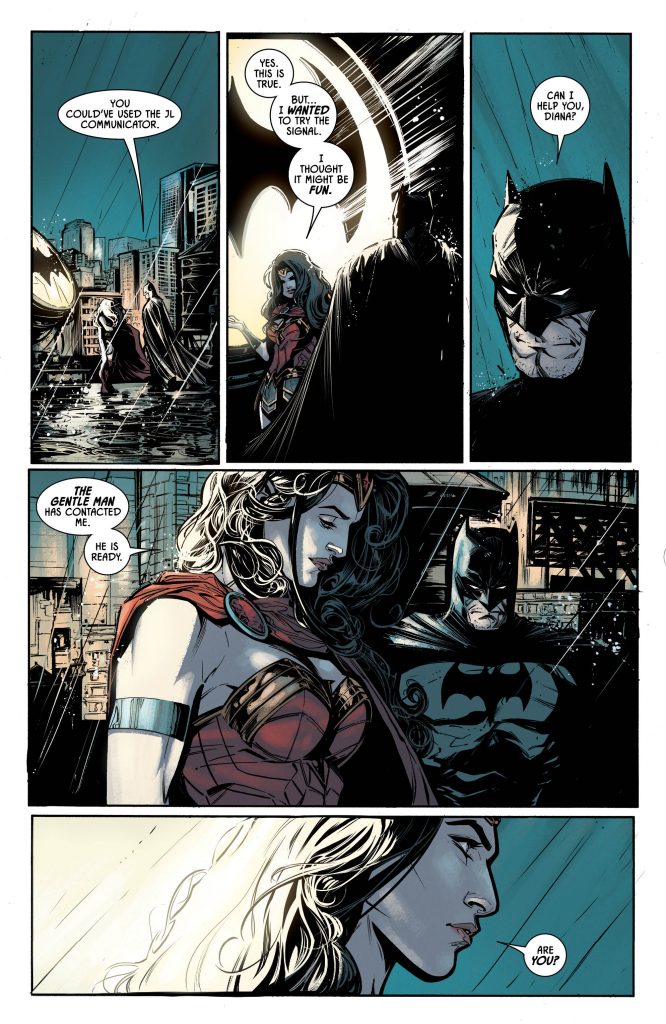 Bruce and Diana are two of the greatest warriors in the DC Universe. Diana is the best sword and shield fighter; Bruce is the most highly trained man in the entire world. Together these “endless hordes” are nothing but fuel for their swords. But it can’t last forever, and that’s the problem.

Time works different when facing these hordes. In the time it takes the Gentle Man to have one meal with Catwoman, Batman and Wonder Woman have been fighting the horde for 10 YEARS! At first, the pair seemed to be convinced that the Gentle Man had been facing these evils for thousands of years. And maybe he has, but only because time expands in that Universe. A second in their normal lives amounts to days of facing the horde. Clearly, The Gentle Man didn’t explain everything to our heroes. Because he reveals that he’s only been away from the regular world for maybe one year, real time. Something that surprises Catwoman, his normal-life guide.

So Wonder Woman and Batman battle the horde. Over and over and over again. They thought they’d be their for hours, days. Instead it’s been 10 years to them. As stoic warriors not known for long conversations, Diana and Bruce share a quiet moment over the long years. The final pages have them dwelling on the thought that the Gentle Man could never return. Meaning they can never leave this cursed existence. And in the final panel, as a soft fire warms them, the warriors lean in close and… 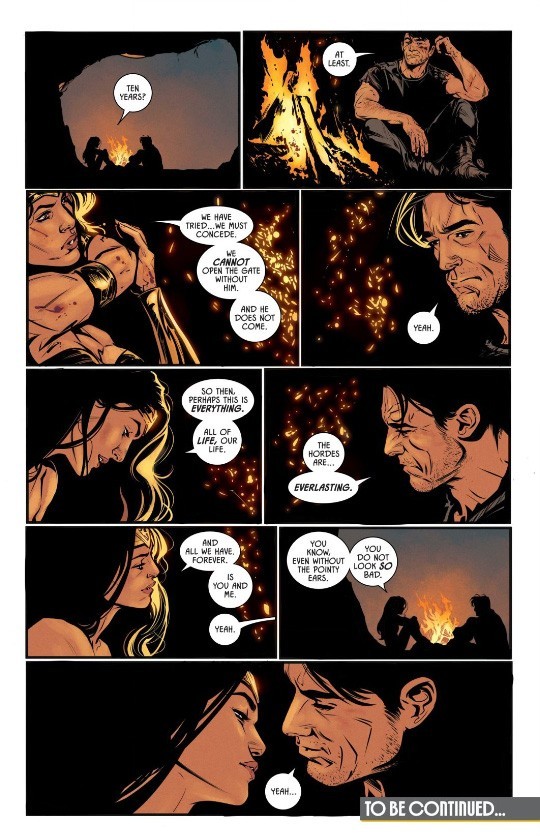 Will They or Won’t They?

Diana and Bruce; Catwoman and Bruce. Diana and Bruce shared some wonderful scenes together in Justice League: The Animated Series as well as in a comic here and there. But Bruce and Selina have been off and on since the beginning. Let’s not forget that Bruce’s first child was with Selina. Could Tom King be building to the birth of Helena Wayne?

Grant Morrison opened the door for additions to the BatFamily with Damian Wayne. He may have created the best Robin ever. Helena’s return has been teased for years. She shared a comic series with Power Girl. But more importantly, she appears as a brand new character in one of the New 52’s best series. In Grayson. The series is about Dick becoming an Agent for an organization called Spyral. His contact? None other than Helena Bertinelli. And who wrote co-wrote Grayson? Tom King. King also reintroduced Helena Wayne in Batman Annual #2 in a possible future of Catwoman and Batman.

But not all roads are clear. Stories need conflict. Fans ignore some comic stories because they don’t believe it will affect the character overall. With good reason. Batman has died numerous times, but he never really dies. He gets in a relationship, but it’s never going to be Clark and Lois. Or will it? Time’s are changing. Where Marvel Comics is a creative nightmare at the moment, DC’s is having the time of their lives. Instead of making Batman’s life worse, Tom King gave Batman a happily ever after. But it can’t all be roses. 10 years is enough to challenge any man or woman who’s facing a seemingly endless line of demons.

However, almost kissing isn’t kissing. Wonder Woman and Batman have faced down more than their share of challenges. Chances are, they’ll do the right thing. But Tom King knew just how to end Batman #39 to get readers talking about it.