Will Caligan is a Desert Shield and Desert Storm veteran who was an Airborne Counterintelligence Agent who attained the rank of Specialist. He recently lost his job as a comic book creator because of his conservative beliefs.

Caligan decided to express his opinion about a trending news topic. Rapper Ginuwine refused to kiss a transgender person. He commented on his friend’s Facebook wall about his beliefs on the subject. 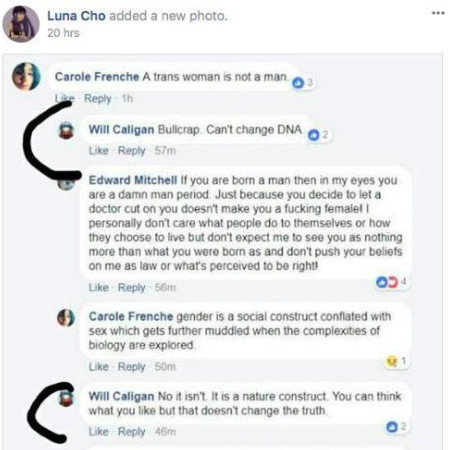 Caligan told us, “The only thing I put was that DNA was science and of God. That a person could not change their sex no matter what they did. It is a natural construct. In total the statement was only about three sentences long.” You can see above that pretty much sums up what he said.

Despite Caligan’s views being held by many others, that did not stop a witch hunt against him that ended up causing him to lose his job.

The hunt began by a Facebook page called Malikali Shabazz. 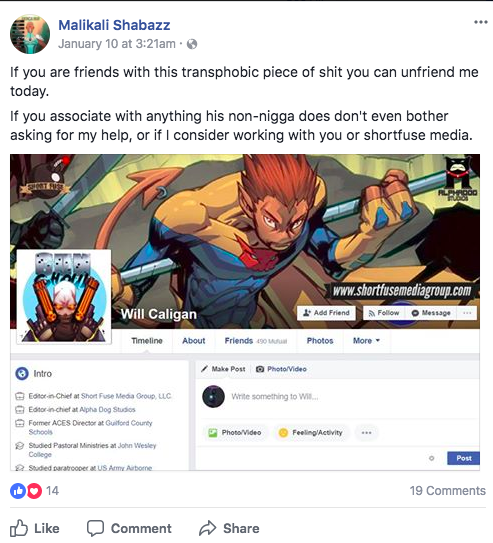 Malikali Shabazz then got his friends to gather their digital torches to pressure Caligan’s employer, Short Fuse Media Group.

Luna Cho, who is the Chief Designer and Artist at Cryptic Raven Studio, lead the hunt with Hoelho Art. 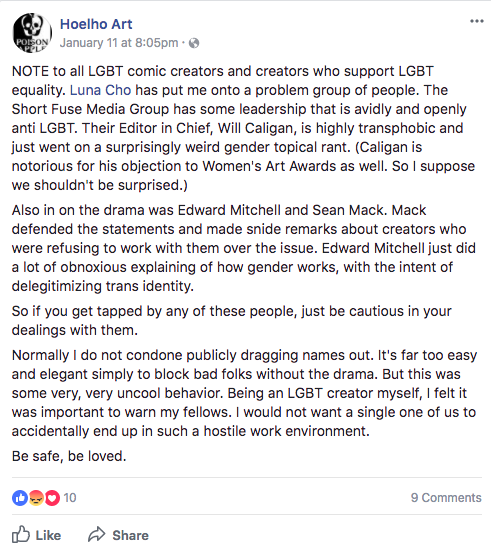 Will noticed that he was being targeted and contacted his boss at Short Fuse Media Group, Sean Mack. Mack originally told Will, “If it’s not this, it would be for something else. Don’t stress over it. I’m good and we’re dealing with it head on. I have you back!”

However, his tune would quickly change as he seemingly lost his spine and bowed down to the lynch mob. “I’m going to have to put some distance between us until you can change the perception people have of you. I think you can fix this. It’s really up to you. Apologize and keep your comments and beliefs to your inner circle instead of public forums.”

It wouldn’t take long after that for Short Fuse Media Group to issue a press release stating they severed ties with Will Caligan and Alpha Dog Studios. Caligan tells us, “I was under contract with Short Fuse. I have the contract but the whole point they went after Sean was because I was part of the four Joint Chiefs which is their editors. Pay was based on sales of our books. They handled all the printing and media. We were the talent that focused on producing titles.”

The press release details they severed ties with Caligan because of “comments that were made by Will that were deemed to be offensive by members of the indie comic book community as well as the LGBT Community.” 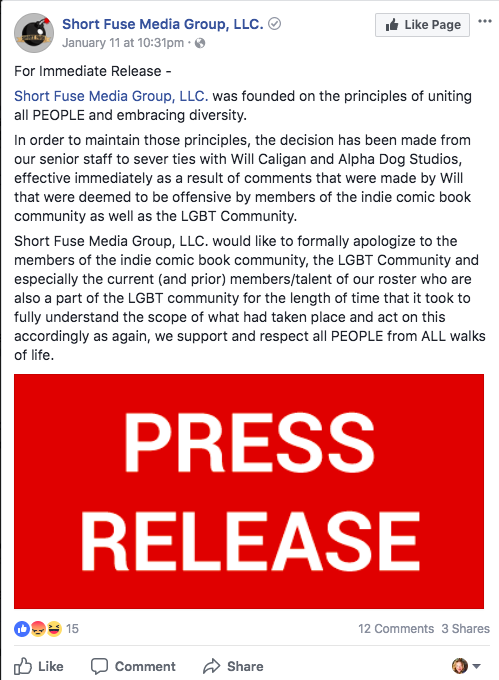 You read that right. Will Caligan lost his job with Short Fuse Media Group because comments were deemed offensive. But Will tells us that losing his job wasn’t the worst part.

“Sean told me he was going to cut ties but in his press release he pretty much threw me under the bus. The issue was not getting fired. I think he has a right to work with whom ever he wants but what he doesn’t have the right to do is slander my name and throw me under the bus to do it. If his press release would have just said “We are cutting ties with Alpha Dog Studios” then I probably would have just let it go but that isn’t what he did. You can read the press release. He attacks me in it.”

And that’s exactly what the press release does. It attacks Will. But what’s even more ironic is that in the same press release where they are severing ties with Will for expressing his beliefs, the Short Fuse Media Group claims to “support and respect all PEOPLE from ALL walks of life.” Apparently, they don’t really believe that. And have no problem severing ties with someone for their conservative beliefs.

The firing has taken a toll on Will both financially and mentally.

I am still in some shock. This all happened so freaking fast. I mean it only took about 13 hours for the whole thing to blow up. I still think that this was a mole hill that was turned into a mountain. They purposely tried to make an example out of me. It has hurt me financially. I had to stop producing books, due to not have a publisher, which in turn hurt the folks working for me. Not to mention what this has done to my reputation. I do think it will always been something that will follow me and I do see it as something that will affect me when it comes to be invited to shows and such. I will lose money on this but that is what they wanted. Now in saying all of that there are a ton of folks out here willing to help me. So in the end I am not sure how it will all work out. God is in control.

Will’s Alpha Dog Studios also released the following press release where he issued no ill will on Sean Mack or Short Fuse Media Group. The press release reads, “We appreciate all that Sean, and his company, has done for us in the past. It is sad to us that it had to end on this type of situation. Remember folks that no one should be persecuted for their beliefs. No one.” 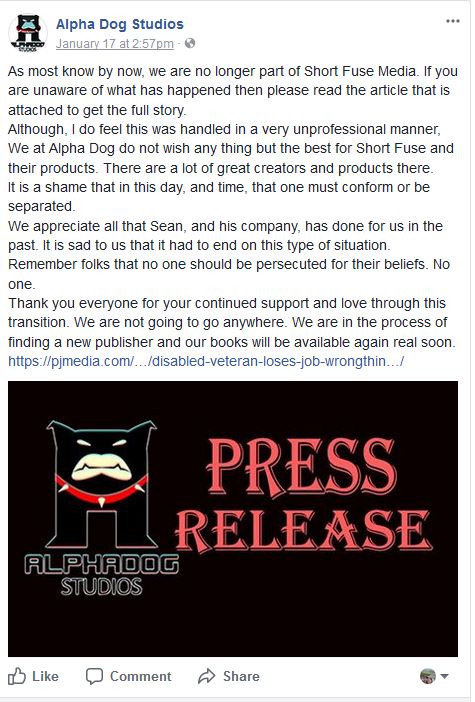 Will also believes he won’t be the last one to be targeted for his beliefs in the comic book industry.

“I do think I am not the last person this will happen to. This industry has become bloodthirsty when it comes to conservatives and not towing the line of the left. I have lost a lot of friends over just some really stupid positions. In all my years as a comic artist I never thought it would be like this.”

Liberals even created an entire spreadsheet of companies, called Grab Your Wallet, to boycott because they do business with the Trump family. Some of those companies include Yuengling Beer, Whole Foods, Wegmans, Walmart, Amazon, Dollar Shave Club, Hobby Lobby, Joseph A. Bank, L.L. Bean, and more.

The left also forced out Mozilla CEO Brendan Eich after 11 days on the job because of his positions on California’s Proposition 8. MLB legend Curt Schilling was fired from ESPN because of his views on North Carolina’s bathroom laws.

Even Mike Rowe was a victim of these witch hunts. Rebecca Bright called for Rowe to be removed as the narrator for “How The Universe Works” on the Science Channel.

She was quoted by Rowe as saying:

“I’m lost on how the producers and the Science Channel can allow anti-education, science doubting, ultra-right wing conservative Mike Rowe to narrate the show. There are countless scientists that should be hired for that, or actors, if you must, that believe in education and science that would sound great narrating the show, example: Morgan Freeman. Cancel this fools contract and get any of your scientists so often on the show to narrate it.”

Rowe had a brilliant response and it’s something we all can learn from.

“If you’re trying to get me fired simply because you don’t like my worldview, well then, I’m going to fight back. Partly because I like my job, and partly because you’re wrong about your assumptions, but mostly because your tactics typify a toxic blend of laziness and group-think that are all too common today – a hot mess of hashtags and intolerance that deepen the chasm currently dividing our country.”

His words ring true for those who caused Will Caligan to lose his job. Differences of opinion or comments that offend someone should not lead to a person being fired. If we let this be the barometer, we might as well be living in Soviet Russia and not the United States of America.