Marvel Artist Jon Malin doubled down on his views concerning the “SJW infestation of [the] comic book industry.” Malin came under attack after a controversial Tweet about the X-Men.

While many of the attackers were just people on Twitter, Rich Johnston of Bleeding Cool took it to another level when he leveraged his platform to insinuate that Jon Malin was part of the Alt Right and was even placing Alt Right symbolism into his comics.

In his article, Johnston suggests that a billboard reading Shell Beach from Thunderbolts #4 is a reference to an Alt Right reading of the film Dark City. 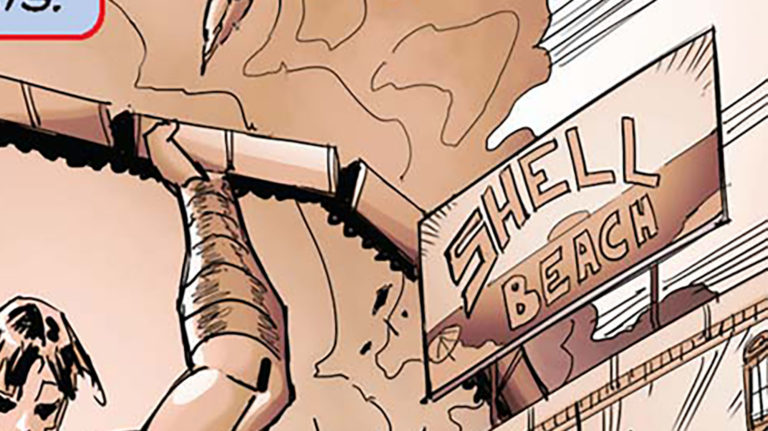 Shell Beach, Jon Malin? What would that be a reference to?

Turns out it’s a reference to an alt-right reading of the movie Dark City. The Matrix is often used with the concept of choosing the red pill to evade the “social justice warrior” version of reality, also big government, mainstream media, and liberal-tinted glasses to get at the real truth.

However, Johnston tries to cover his tracks by offering another possibility for the reference:

The Shell Beach billboard could be a reference to the recreated reality of Pleasant Hill in the comic, where SHIELD has taken supervillains, changed their memories and minds and have kept them imprisoned in a mundane reality.

But then he goes on to say:

It could also be a shout out to those who see Shell Beach as an idealised icon of the alt-right, and one that, if it doesn’t exist, should be fought for.

Malin took Rich Johnston to task, rightfully calling his article a “hit piece.” He even explained why he used the imagery, “I referenced a movie that creeped me out as a kid because of Pleasant Hill similarities, not some “reading.”

Saw @bleedingcool hit piece saying I'm = Ardian Syaf. Syaf hid blatant anti christian/jewish messages. I referenced a movie that creeped me out as a kid because of Pleasant Hill similarities, not some "reading". Comics journalism, everyone. Take an ideological bow, @richjohnston

After Johnston said he would add Malin’s response to the article, Malin told him how dangerous that label is to someone’s career.

Yeah. Other than how much you suck… 🙂 You are painting me as referencing Alt-Right materials and you know how dangerous that is not only to career but personal safety. If I was Alt-Right I'd own it. I'm not. Oh, and… you suck. Add that to your fable.

And Johnston’s “hit piece” insinuating that Jon Malin is a part of the Alt Right would spread throughout the comic book industry. Marvel writer Kieron Gillen, who writes The Wicked + The Divine, Doctor Aphra, and Star Wars believed Bleeding Cool’s insinuation and spread the speculation.

(Malin admits it was in a tweet in that article.)

What makes this even more interesting is that some sleuths on Reddit discovered that the film review Johnston uses as evidence was actually published more than seven months after Malin’s Thunderbolts #4 hit comic book stands.

Malin calls out Gillen’s Tweet and Rich’s insinuation as a lie and even says he voted for Barack Obama in 2008.

Complete lie. Big thanks to @Bleedingcool and @richjohnston for not updating it's hit piece on me with my reply continuing to damage my reputation and jeopardize my safety by labeling me as Alt-Right. I'm not. I'm a moderate that leans Libertarian. I voted Obama the first time. https://t.co/WuqzlniQDI

So @CBR is repeating @bleedingcool trash and said I have "declined comment", I wasn't even aware CBR tried to contact me. Disingenuous. I'm going to follow you CBR, DM me.

He also explains that his words are true and the “SJWs are now getting a taste of what they have been doing.”

I have triggered the SJWs to reveal themselves in this industry. It wouldn't bother them if it wasn't true. Imagine that, just by comparing them to Nazis. SJWs are now getting a taste of what they have been doing to Editors, Writers, artist, colorists, etc and they can't stand it

But he didn’t stop there.

We spoke to Jon Malin about the ongoing controversy and he was fired up when he explained some of the major problems in the comic book industry. He specifically mentioned the tactics used by Rich Johnston and Bleeding Cool.

“It’s the dishonest journalism tactics like Bleeding Cool’s, it’s minions, and specifically it’s founder Rich Johnston that have allowed this industry to be smashed into the dirt. They are ideologues protecting ideologues as more and more see the opportunity to rush in and kill this weakened “patriarchal” institution. They want to say ‘I Helped!’

Bleeding Cool has gone to an AMAZING and terrifying length to label me, a political moderate and Obama supporter as ALT-RIGHT. They are knowingly jeopardizing my reputation and personal safety, but they do not care. I am a message to the next person to “Shut up!” When this industry is nothing more than a smoldering mound of ash they will be shouting, ‘We WON!’ Thousands of comic shops will close their doors and thousands more will be unemployed.”

“Media sites and plenty of good people have turned a blind eye, fearing a SJW accusation from someone in the next cubical or even friends and family. They are afraid of being labeled a ‘racists, sexists, homophobes’ because it could ruin their career and advance the accuser Game of Thrones style. A rational critic and closest thing to respectable comics journalist, Douglas Ernst, has bravely chosen to put his own neck and safety on the line to speak out because he loves this industry. He was vilified for pointing out that an ideology was firmly setting up shop in mainstream comics and he’s 100% right.”

“I think anyone with reason can see that he and other YouTubers like Captain Cummings and Diversity & Comics, who may be more abrasive, but saw no other options at this point chose to become hammers against this ideology. Their choice saw them threatened with physical harm including an implied threat by a major SJW comic book writer with temper issues and a messiah complex. Think about that. Who encourages and threatens physical harm against their critics? Critics have never asked for harm against them. These authoritarian SJWs, are they now the good guys or the peaceful critics? Take a step away from this industry, look back, and the truth is clear.”

Jon Malin sees SJWs as people who have infected the comic book industry by persecuting people they deem “racist, sexist, or homophone” or who disagree with their political ideology. He even points out they have no qualms ruining people’s careers in the comic book industry or even inflicting violence on their opponents. He’s taking a heroic stand against these SJWs or “Store-Killers” as Diversity & Comics calls them.

Courage in the face of adversity makes for great comic book stories. Jon’s supporters have already begun stepping up to fund an independent comic book project which includes Graveyard Shift with co-creator/writer Mark Poulton People through Patreon. They already have two issues created.