Beware of spoilers to Doomsday Clock #3, ye who enter here

Geoff Johns has made some big changes to the conclusion of the Watchmen story. First, he brought two major heroes back. In the pages of Doomsday Clock #3, Johns finally explains how. First, he explained just how The Comedian Eddie Blake found his way to the DC Universe. Now, he has revealed the identity of the new Rorschach.

In the previous issue, Johns revealed that the character’s name was Reggie. But other than hinting at the deal between Ozymandias and this new Rorschach, nothing was revealed. But now Geoff Johns has shown the face and the motivation for Reggie to become arguably the greatest hero of the Watchmen Universe.

First, Reggie’s face is revealed as he starts to get comfortable in Wayne Manor. 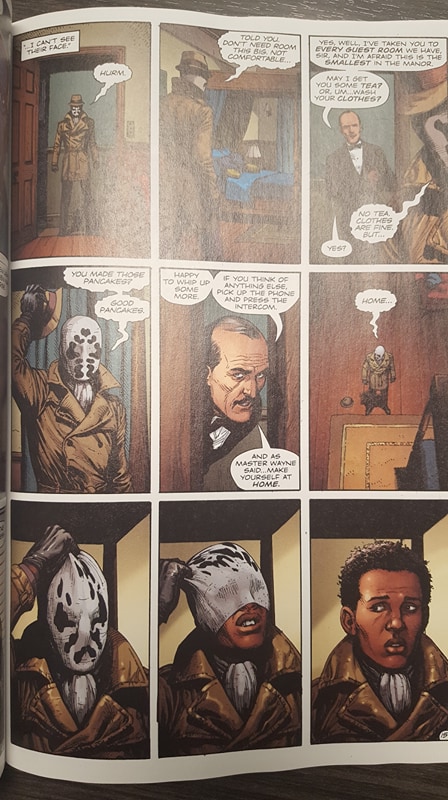 Unlike Walter Kovacs, Reggie isn’t an aged veteran of the cape and cowl. He’s just a kid. He reveals himself to be a young but talented crusader not unlike Batman.

But that doesn’t reveal much about Reggie other than his skin-tone, which was already revealed in the first issue. What really makes a character like Reggie, like Rorschach, tick is their motivation. The reason for them to don the costume and take up the cause. Well, Geoff Johns just so happened to use the plot of the original comic to create this latest hero. 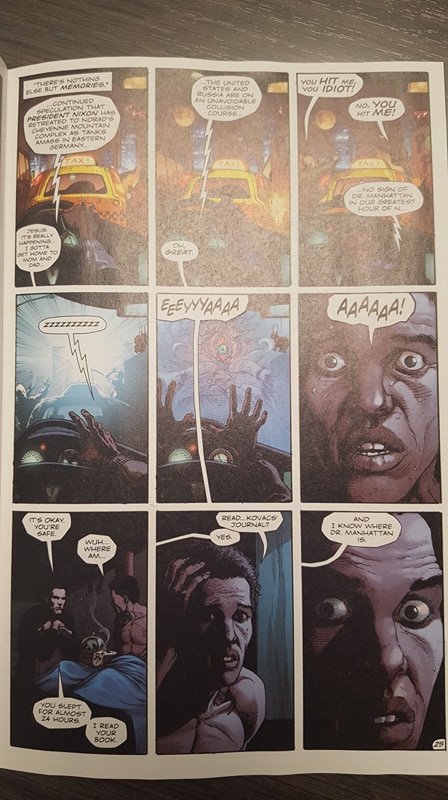 Reggie is revealed to be nothing more than a taxi driver who had the worst day of his life. Over the course of these three issues he’s murmured about his family, as well as his hatred of Ozymandias. But he clearly hates Dr. Manhattan more. Unfortunately, Batman doesn’t exactly have a “team-up” in mind when he tells Reggie he knows the whereabouts of Dr. Manhattan.

Instead it leads to an important, but unsurprising development for the character.

Batman leads Reggie to Arkham Asylum, under the pretense that they will find Dr. Manhattan. Rather than the most powerful meta-human ever, Reggie finds himself in a cell. Batman tells him that’s where he belongs and walks away.

At first glance, this would seem like typical, skeptical Bruce Wayne. Unfortunately, Geoff Johns hasn’t always had a great interpretation of the character. So a lot of his writing ends up demonizing his actions and using them like dramatic story elements. Which is exactly what’s happening here.

Every story follows certain beats and Doomsday Clock has finished its first act. The goal of the story is to find Dr. Manhattan; readers know the heroes that seek to achieve the goal. But the rest is a little blurry. Dr. Manhattan’s motivation for tampering with the DC Universe is unclear. Whether or not Batman and Superman will become privy to what’s happening in time is also up in the air. Part of the overall story of Doomsday Clock might be to watch as unlikely heroes, like Ozymandias, save or alter the DC Universe for the better.

But as of issue #3 their story is preposterous. Bruce Wayne is most likely aware of Reggie’s talents. Someone capable of entering the Batcave in such a manner is worthy of Batman’s respect. But he’s still a loose end that knows Batman’s biggest secret. Not only that, Kovac’s journal will not seem like the thoughts of a sane individual. As the Watchmen story becomes clear to Bruce, he’ll have more than a few questions for every hero involved.

Reggie, Rorschach, has a major part to play in this story. Johns and Frank will still probably have Batman and his Alan Moore-created, metaphorical self, team-up in Doomsday Clock. Hopefully, sometime soon. The clock is ticking.