@CaptMarvelNews I'm sorry it's not better quality but here ya go!!! pic.twitter.com/RWpAoh7gCS

You can see a still of the villain grimacing in pain.

The actual video of Brie was about 5 seconds of this happening. pic.twitter.com/v1jtcwRQTf

In the video she appears to be shocking him or maybe sending energy waves pulsing through his body forcing him to convulse and eventually fall to her feet in agony.

In the comics, Captain Marvel’s powers include super strength, endurance, stamina, flight, physical durability, a limited precognitive seventh sense. She is also resistant to many toxins and poisons. She also has energy absorption powers which allows her to absorb electricity magnifying her strength and energy projection powers. In fact, she can use her energy projection powers to channel the force of a nuclear bomb. 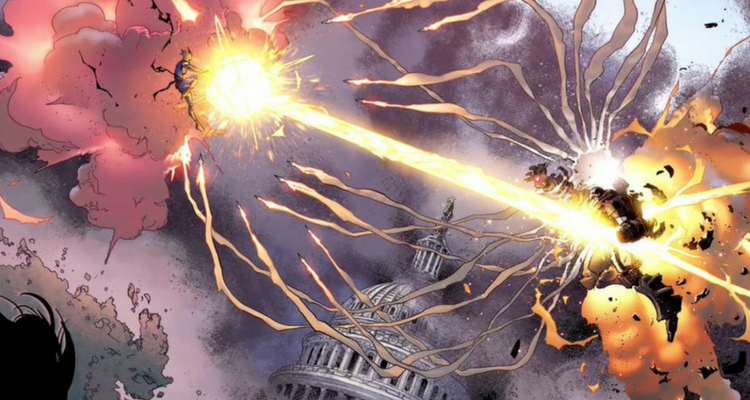 It wouldn’t be a surprise if she was using her energy projection powers to send waves through this man’s body.

Other set photos show Larson’s Captain Marvel examining a map of Los Angeles as she appears to communicate through an ear piece. You can see her hand reaching for her ear. It’s possible she might have pried the location of an even more treacherous villain and now needs to track him down. Remember, this movie is set in the ’90s so GPS wasn’t really around and if you wanted to find something, your best bet was a good old fashioned map.

Captain Marvel is expected to hit theaters on March 8, 2019. The film is being directed by Anna Boden and Ryan Fleck. It stars Brie Larson as Carol Danvers aka Captain Marvel. Also appearing in the film will be Samuel L. Jackson as Nick Fury and Jude Law as Walter Lawson or the Kree known as Mar-Vell. DeWanda Wise will also star in an unknown role and Ben Mendelsohn is also rumored to play the primary villain, an unknown Skrull leader.