The DC Universe will be Unleashed!

Scott Snyder and Greg Capullo are currently working their magic on Dark Nights: Metal, DC’s latest event-comic. Starring the Justice League, the story is a harrowing and awesome exploration of DC’s dark side. Now, DC has announced an equally awesome follow-up to the story – Justice League: No Justice!

Famed Batman and Dark Nights: Metal writer Scott Snyder is joined by writers James Tynion IV and Joshua Williamson as well as artist Francis Manapul for a brand new series! The comic is a limited title with 4-issues beginning on May 9th.

The creative team had incredible things to say about Justice League: No Justice.

“We thought we knew the entire map of the DC cosmos,” says Snyder. “We thought we had explored all there was to explore. But now we know that all this time the Multiverse was nothing but a fishbowl, and now we’ve been dumped into the ocean, unleashing terrifying new threats, and wondrous new possibilities. METAL opened up channels of storytelling that Francis, James, Joshua and I are excited to explore in a big way. When we’re finished, fans will never look at the Justice League in the same way again.”

Of course, Snyder and company skimp on the details. But with good reason. The story of Barbatos and the Batman Who Laughs is far from over. Issue #5 hits shelves this Wednesday. But it’s great to see DC is once again building to something. Unlike Marvel Comics, and DC’s own film counterparts, DC Comics have had a plan for years now. One that is allowing creators to create amazing, wondrous titles. That just so happen to give the fans and readers exactly what they want.

Hell hath no Fury like a DC Universe Scorned

The announcement came with four new pieces of Francis Manapul art. Manapul’s pencils and colors alone are worth the price of admission. Each beautiful landscape of heroes and villains focuses on different members of the league, implying each issue will have a different team. This definitely isn’t a Justice League you’ve seen before. There are a number of major villains in this League. 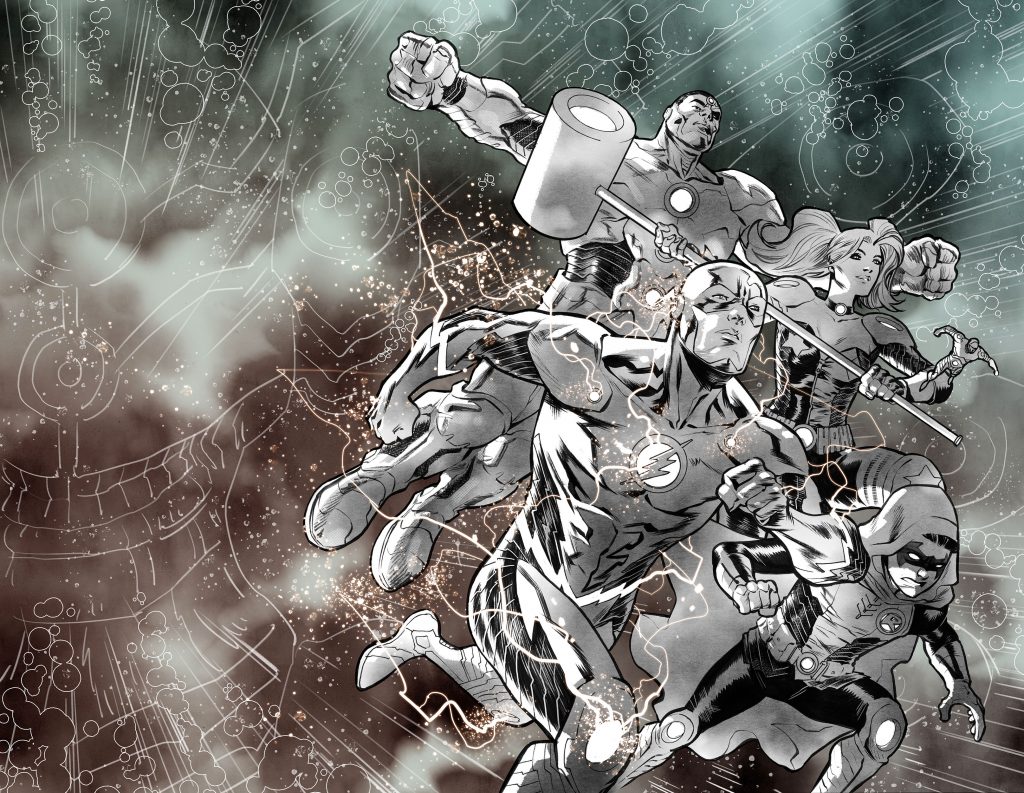 Next up is Doctor Fate, Raven, Zatanna, Etrigan, and Wonder Woman. This team definitely has some supernatural abilities going for it. 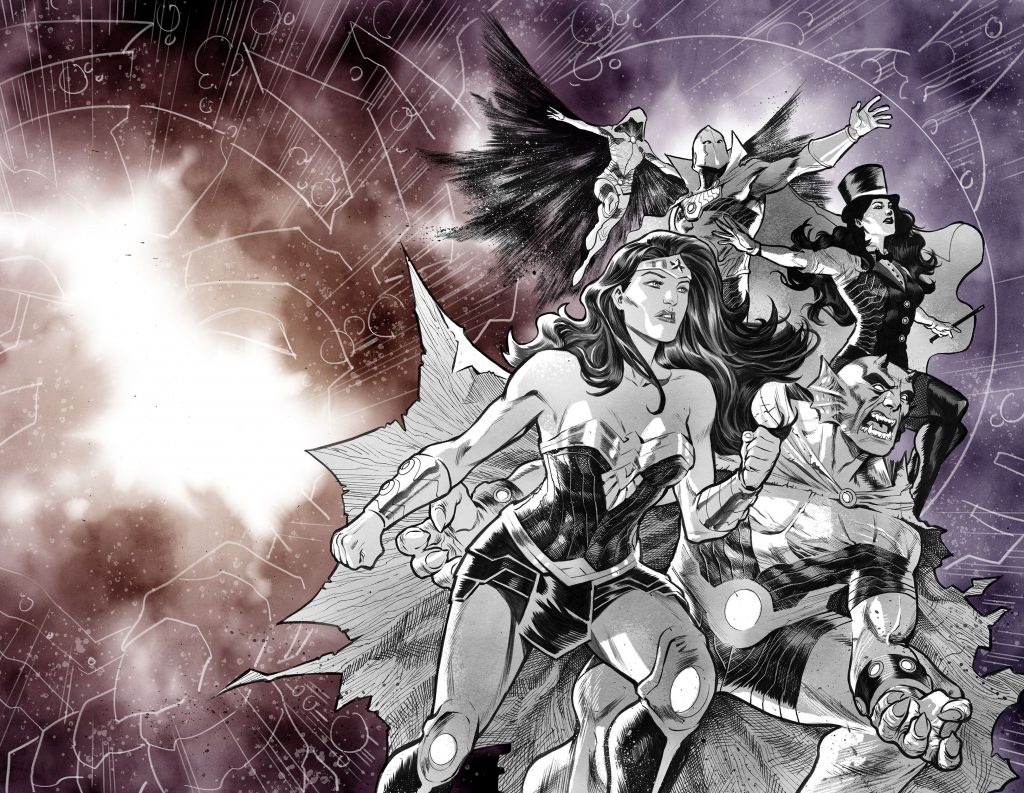 Then we get Lobo, Beast Boy, Batman, Deathstroke, and Lex Luthor. 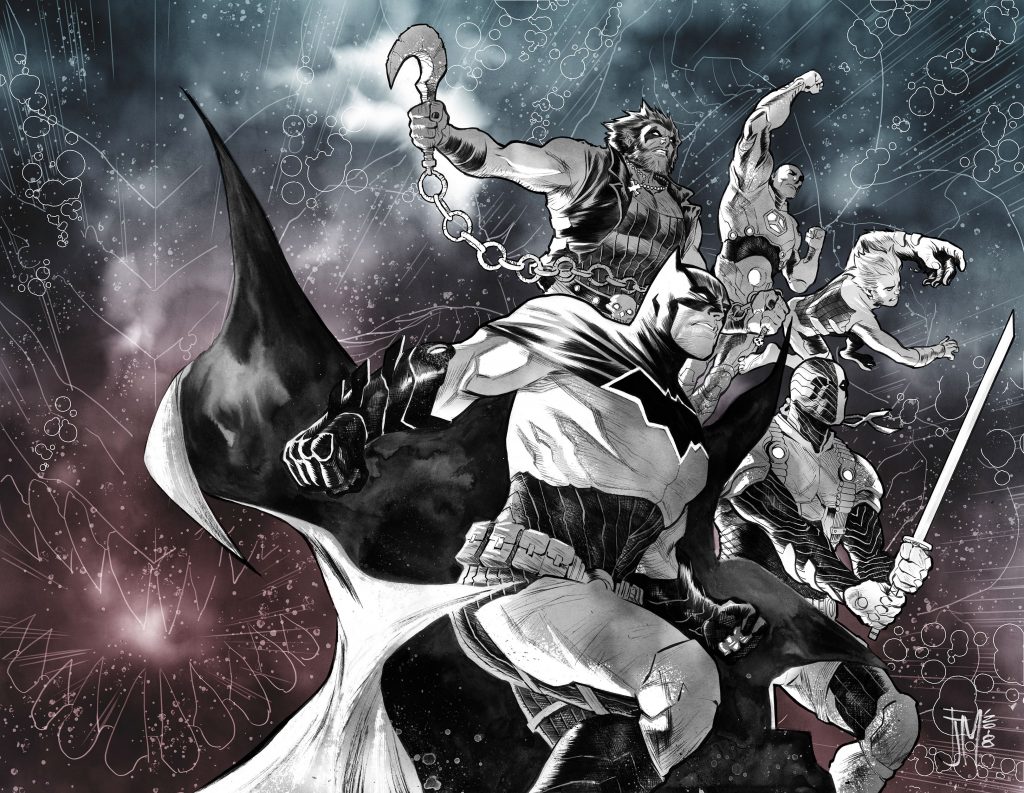 Last, but not least we get Martian Manhunter, Superman, Starro, Sinestro, and what appears to be Starfire. 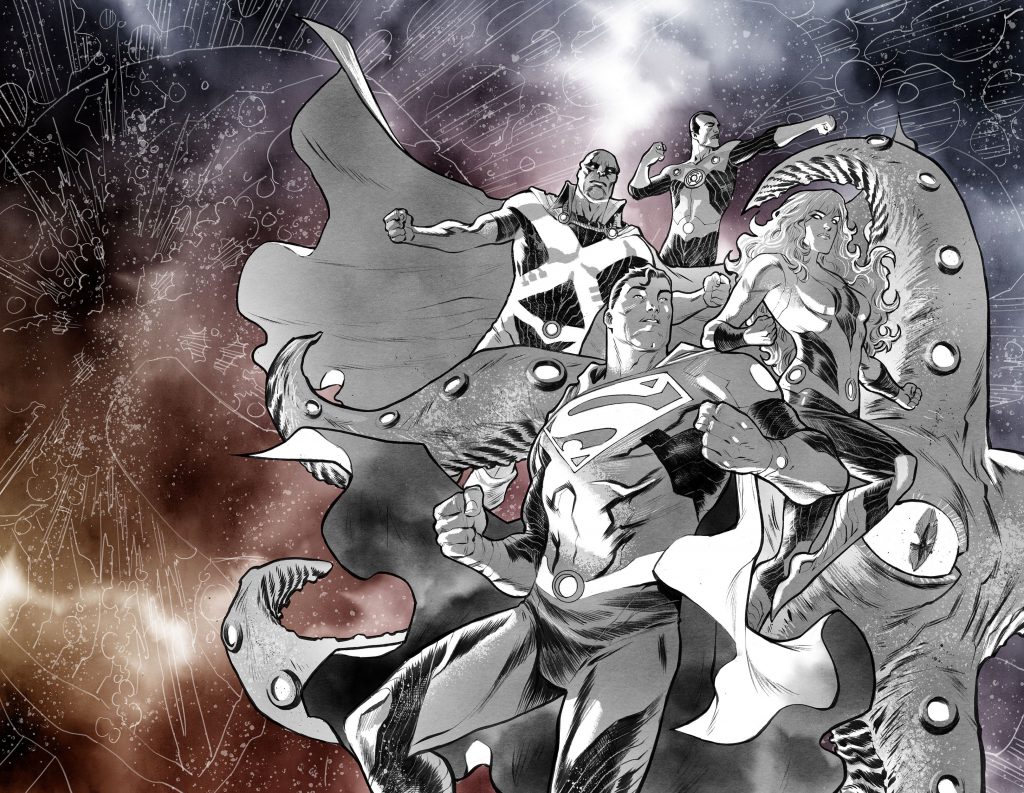 Breathtaking. It looks like whatever trouble the League gets into will be Cosmos and Universe-spanning. As Snyder, Williamson, and Tynion pick away at the Multiverse, who knows what horrors they’ll uncover?

Once again the DC Universe will be challenged. Snyder’s been taking some frustration out on the Multiverse for a few months. As Barbatos attempts to meld the Dark Multiverse with the original, the Justice League are battling his “Dark Knights” to make sure that doesn’t happen. It’s a fun and entertaining story with incredible art by Grandmaster Capullo. What else could a reader want from a comic?

So it’s no surprise DC is trying to capitalize on that success with Justice League: No Justice. Here’s the official synopsis:

In this four-issue miniseries, the super-villain Brainiac arrives on Earth with a dire warning for the Justice League: there’s a threat coming to destroy Earth, one that the heroes are ill-equipped to handle.  Brainiac thinks he holds the key to victory, but it means combining members of the League with some of the most dangerous villains in the DC Universe and sending them into battle against this extinction-level menace. The stakes are at their absolute highest; if one of these teams fail. It’s game over.

As implied by the many heroes and villains, the world needs both the bad and good guys for this story. It would seem Snyder and DC are trying to up the game with each title. Taking themselves to new heights with their antiquated characters.

The Best of the Best

Not only will Justice League: No Justice be starring DC’s greatest characters, it’s led by its greatest creatives. At first, Scott Snyder and Batman were joined at the hip. But now, Snyder has proven himself more than capable of handling team and event books. Williamson and Tynion are both excellent writers, with great runs on The Flash and Detective Comics. Together, the three will be a force to be reckoned with.

But the most exciting tease yet comes from one of the best comic artists in the business. Ever. Francis Manapul has been a staple over at DC for years now. So when they decided to make one of their most exciting titles yet, who else could they ask to realize the visuals?

Manapul had plenty of great things to say about the title:

“I’m laying out the biggest action of my life,” says Manapul. “The Justice League realizes that they need to expand their reach to become something bigger than they have ever been before. If you thought my work for JUSTICE LEAGUE: DARKSEID WAR was huge, I’m taking the League to the edge of the cosmos with NO JUSTICE. Anyone who has asked for Harley Quinn, Martian Manhunter, Starfire, Zatanna, the Atom, Raven, or Doctor Fate to be in their personal Justice League will stand up and cheer.”

To say DC Comics and their creatives have been pushing the envelope for the last few years is to sell them short. They’ve turned around an entire industry since 2012. A couple of times, actually. But now they’re focusing on giving the limelight to the characters that make the DC Universe just so fantastic.

In the hands of these masterminds, Justice League: No Justice will be another spectacular adventure for DC’s New Age of Heroes.