**Spoilers for Justice League #38 Below**

Fox News commentator Sean Hannity is now an enemy of the Justice League thanks to Justice League #38 written by Christopher Priest with art by Marco Santucci.

The League is somewhat scattered. They’ve been exposed by a Deranged Fan who used to be one of the technical specialists who built the Justice League Watchtower. Not only does he have inside knowledge about the Watchtower, but according to Batman he has “a very strong will…and an arsenal of [the Justice League’s] secrets to use as weapons.”

While discussing the Fan and his possible weaknesses, Green Lantern Jessica Cruz discusses his greatest weakness. And that’s when Batman reveals that Sean Hannity is an enemy of the Justice League. 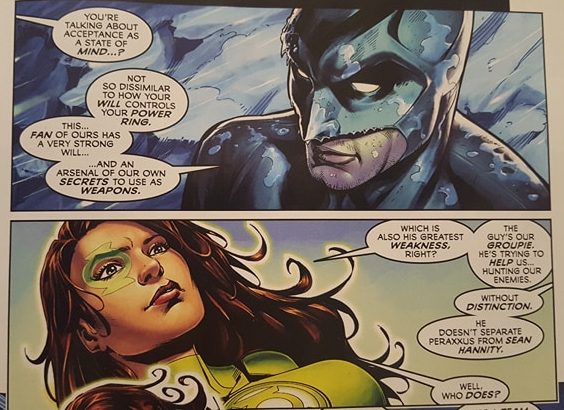 Peraxxus is an intergalactic threat who destroys worlds. After he has destroyed them he sells their resources for scraps. He uses the Signal Men, giant robots from a long dead alien race, to determine when planets are ripe for destruction. The Signal Men are scouts that track the progress of a civilization and can signal Peraxxus when they have reached a certain threshhold. 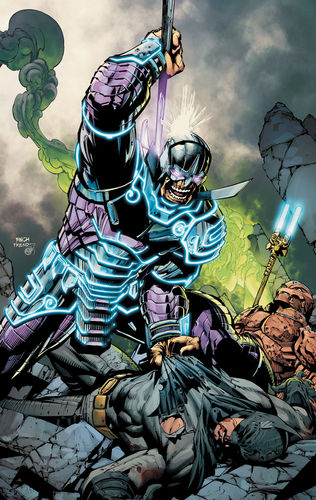 Sean Hannity may have made himself a target when he defended his friend Kevin Sorbo. Sorbo was recently banned from the East Coast Comicon by organizer Cliff Galbraith. Hannity defended Sorbo and criticized Galbraith saying he’s “just mad that comic book movies are just boring formulaic Hollywood drivel that people are tired of.” He then blustered, “I’ll pity the poor insecure guy who cannot escape his comic book world, and handle a little real world truth and reality and an opposing viewpoint. Take that Batman.”

However, it seems a little petty that Christopher Priest would make Sean Hannity a villain of the Justice League over that. More importantly this is a dangerous precedent DC Comics is setting to make well-known conservative public figures the enemy of the Justice League. It makes the comics look like they have an agenda to sell rather than a story to tell.