Scott Snyder wants Grant Morrison to come back to the DC Universe. So much so that he brought the legendary and prolific writer on board for Dark Knights Rising: The Wild Hunt #1. Like Batman: Lost, The Wild Hunt is a collection of different stories that together further the Dark Knights story. The star of the show is a surprising character. But one who Grant Morrison loves dearly: Detective Chimp. The Chimp believes he’s losing his mind over the course of the story. As the tethers that connect the Multiverse come apart, so does his mind. Little did everyone know Detective Chimp is the key to saving the Universe.

The art on the issue is incredible. Together Howard Porter, Jorge Jimenez and Doug Mahnke lead a fantastic art team that are tasked with depicting many of DC’s greatest heroes. Whether their fighting for their lives or dying in agony, many of DC’s heroes are shown in multiple iterations. And just why is that? Because the very Multiverse is being torn asunder.

And the Detective knows this. 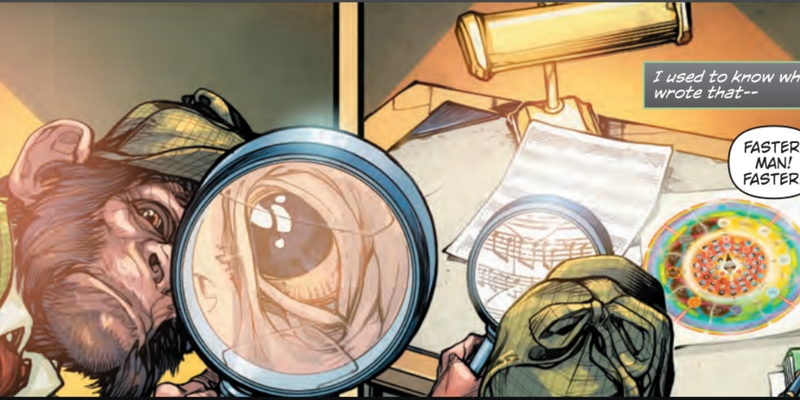 The map of the DC Multiverse, created by Grant Morrison in the pages of his masterpiece Multiversity, is a clue in Chimp’s case. Of course, since Snyder’s Dark Knights are trying to tear the Multiverse apart the map is an important piece of the puzzle. But what isn’t on the map is the key to the entire story.

Unfortunately, like any good story The Wild Hunt creates hope before dashing it to pieces. The Dark Knights are beginning to see the flaws in the Batman Who Laugh’s plan.

In fact, one of them makes a compete reversal.

When a ray of positive creation energy is shot directly at Red Death it has a remarkable effect. It turns his red evil into golden radiance, briefly returning sanity to Barry Allen. He realizes that Bruce is insane; that the Dark Knights are insane. He starts to help the Justice League’s Flash fight the Dark Knights before an unsurprising surprise meets the awesome character.

The problems is that the same rays that briefly created this golden character were also imbued with tiny dark multiverses. Unfortunately, this means that far too many positive and negative energies are at Barry’s core.

And the worst begins to happen. 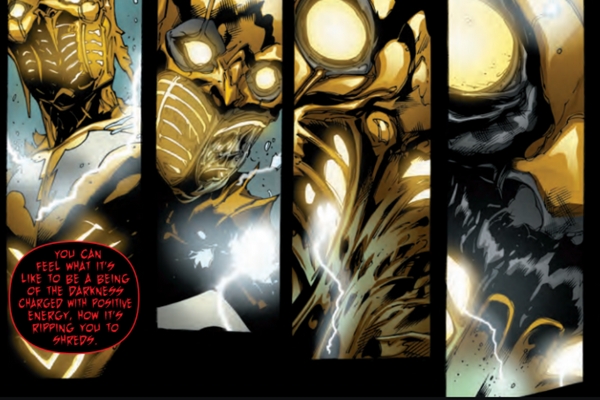 Just as the Batman Who Laughs says mockingly, Red Death is a being of darkness now charged with positive energy. And it literally tears him apart in one of the most glorious panels in the pages of Dark Knights Rising: The Wild Hunt #1. 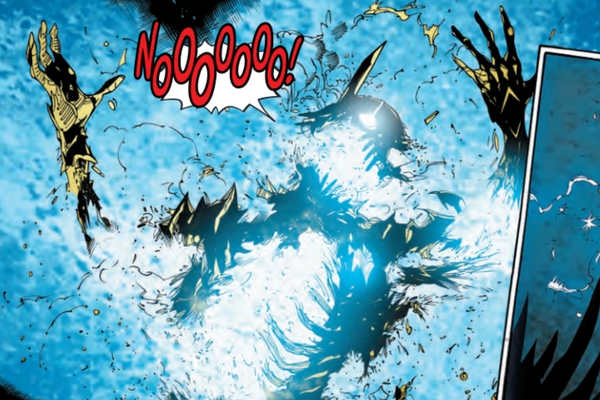 A sad fate. But considering Red Death was still guilty of some pretty major atrocities, he didn’t really deserve a good death. One of the more interesting parts of the issue was the manner in which he died. It’s oddly reminiscent of Dr. Manhattan’s creation in the pages of Watchmen.

Could this mean Red Death will make an appearance as a godlike character? Probably not. Instead it means that Red Death’s atoms were ripped apart. Similar to what happened to Manhattan. But where the good doctor became a godlike creator; Red Death became nothing.